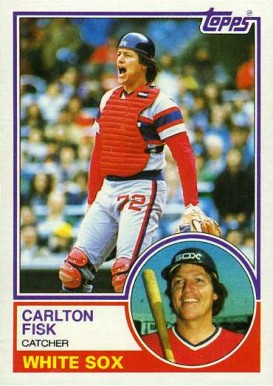 At Comiskey Park in mid-May 1984, there was a chance for “a miraculous happening,”1 an opportunity for something that had not happened since between July 1 and August 6 of 1977, when both Chicago teams were in first place for more than a month.

Over in the NL, the Cubs did their part. They beat the Cincinnati Reds 10-4, while the Mets lost to the San Francisco Giants 4-3, vaulting the Wrigley Field team into first place.

The White Sox, meanwhile, had defeated the Kansas City Royals in the first two games of a three-game series, and a victory in the finale could sweep the Pale Hose to the top of the division. The Baltimore Orioles already had shut out the Angels 5-0, making the miracle possible.

In a close ballgame, the White Sox scored in each of the first four innings against Kansas City but could not hold the lead, falling 7-6 before a crowd of 21,669. The Royals’ comeback overshadowed the effort of Chicago catcher Carlton Fisk, who went 4-for-5 at the plate and hit for the cycle.

White Sox manager Tony La Russa handed the ball to Floyd Bannister for the start, while Royals skipper Dick Howser called on Larry Gura. Bannister brought a 2-4 won-lost record and a 4.97 earned-run average into the contest. Gura, on the other hand, was 5-1 with a solid 2.72 ERA. Kansas City had allowed only 10 runs in its last five games as Chicago looked for a series sweep.

The Royals put across a run in the first without the aid of a hit. Willie Wilson, who was playing in his first game since returning from a suspension for drug possession,2 walked to lead off the frame. With one out, he stole second. Bannister, in an attempted pickoff at second, threw the ball past second baseman Julio Cruz, and Wilson raced around the bases to score.

In Chicago’s half of the first, Fisk doubled with one out and Tom Paciorek walked. Greg Luzinski flied out to right, allowing Fisk to tag and advance to third. Ron Kittle then singled, Fisk scored, and the game was tied, 1-1.

In the second, Dave Stegman led off with a solo home run to give Chicago a 2-1 lead. Vance Law followed with a single, moved up two bases on two groundouts, and scored on Fisk’s RBI single. Stegman added a two-run homer off Gura in the third inning to stake Bannister to a 5-1 lead.

Bannister nearly gave up the lead in the fourth. Hal McRae singled to open the frame and scooted to second when Bannister threw a wild pitch with Steve Balboni at the plate. Leon Roberts doubled home McRae after Balboni struck out, John Wathan walked, and Greg Pryor doubled to score Roberts. U.L. Washington drove in Wathan with a sacrifice fly to center field. Suddenly, it was 5-4.

Through three innings, Gura had faced 17 Chicago batters, yielding seven hits and a walk, with only one strikeout. Howser kept him in the dugout as the bottom of the fourth started and brought in Joe Beckwith. After two quick outs, Fisk came up for the third time in the game and belted a solo home run, extending Chicago’s slim lead to 6-4.

However, Bannister ran out of gas in the sixth. He retired Roberts but gave up a single to Wathan, who scored when Pryor doubled. Left fielder Kittle made an error on the play, and Pryor continued to third base. La Russa called to the bullpen for Salome Rojas, ending Bannister’s night. Washington greeted the new pitcher with a single and the score was tied, with all the runs charged to Bannister.

The seventh inning was highlighted by triples from both teams. Roberts’s two-out shot plated Balboni with the go-ahead run for Kansas City. Fisk led off the bottom of the seventh with a three-bagger off new Royals pitcher Dan Quisenberry, but his Chicago teammates stranded him there, failing to drive him home on two groundouts and a strikeout. This was Fisk’s first triple of the season (and would be his only one).

He had hit for the cycle, but his team was still losing. The White Sox had a final chance in the bottom of the ninth, with Fisk at the plate and Cruz on first. But Quisenberry’s slider caused Fisk to ground into a double play, and the hopes for the first-place miracle vanished.

Fisk, coming off a 1983 season that ended with a third-place finish in the AL MVP voting, had been struggling at the plate for much of the season. He hit safely in only 12 of his first 26 games. In this game, he “busted out of his 0-for-18 slump with a strong display of hitting,”3 becoming just the third White Sox player in history to hit for the cycle.4 Speaking about the cycle, he told reporters, “I didn’t know it until somebody told me.”5 Besides knocking in two runs and scoring twice, he raised his average 31 points, but still only to .198.

The loss broke Chicago’s three-game winning streak and evened its record at 18-18. As Tony La Russa said, “It’s a shame to do all the things we did in this game and not be able to celebrate.”6 The White Sox left five men on base, including two left on by Fisk. They also wasted Stegman’s two homers. Chicago lost six of its next eight games, falling to fifth place. Kansas City won five of eight but remained in sixth place.

His cycle came 10 days after Baltimore’s Cal Ripken Jr. accomplished the feat on May 6. Later in the season, Willie McGee of the St. Louis Cardinals (June 23) and Dwight Evans of the Boston Red Sox (June 28) enjoyed cycle games.

2 Wilson and Royals teammates Willie Aikens and Jerry Martin were suspended for one season by Commissioner Bowie Kuhn on December 15, 1983, for attempting to possess cocaine. After a grievance hearing on April 3, arbitrator Richard I. Bloch commuted Wilson’s and Martin’s suspensions to May 15. Kuhn commuted Aikens’ sentence to May 15. Los Angeles Times, August 21, 1997.