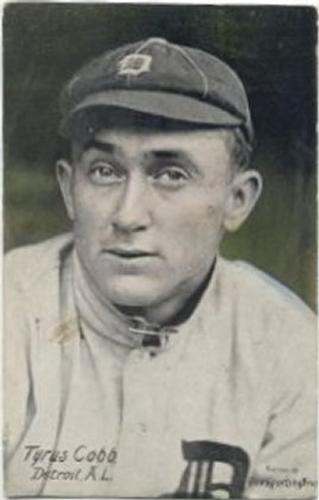 The story of the Philadelphia Athletics’ 24-2 shellacking of the Detroit Tigers on May 18, 1912, actually started three days earlier with an incident involving Ty Cobb and a spectator during the Detroit Tigers’ 8-4 victory over the New York Highlanders at Hilltop Park in New York. The succession of events that followed produced an unprecedented players’ strike, the use of replacement players, and a lopsided Athletics victory.

Trouble began brewing even before the start of the Tigers-Highlanders game on May 15. New York fans greeted Cobb with a verbal barrage as soon as he appeared on the field. One fan, Claude Lueker, was particularly abusive toward Cobb. During the early innings, Cobb and Lueker traded taunts and insults. According to Cobb, “He was yelling, ‘Your sister screws niggers’ and ‘Your mother is a whore.’”1 At the end of the third inning, Cobb returned to the bench and yelled an insult about Lueker’s sister, to which the spectator responded by calling Cobb “a half n—–.”2

Teammate Sam Crawford, who rarely saw eye-to-eye with Cobb, added fuel to the fire when he asked the volatile Southerner if he intended to take that. This set the Georgia Peach off. Leaping a railing, Cobb trampled fans to get at his tormentor, sitting a dozen rows up in the stands. The Tigers star “battered Lueker’s head with at least a full dozen punches, knocked him down and with his spikes kicked the helpless man in the body.”3 Nearby fans scattered with shouts of “He has no hands!”4 Unknown to the frenzied Cobb, Lueker was unable to defend himself. A year earlier the heckler had lost one hand and three fingers of another while working as a printing-press operator.5

American League President Ban Johnson was in the park that day and witnessed the horrendous incident. That evening Johnson summoned Cobb to his hotel room. While sharing his version of events, Cobb told Johnson, “When a spectator calls me a half-nigger I think it is about time to fight.”6 Johnson was aghast and later informed Detroit manager Hughie Jennings that Cobb was suspended indefinitely.

The next day the Tigers traveled from New York to Philadelphia to face the Athletics in a three-game series. In the opener on May 17, Paddy Baumann replaced Cobb in center field as the Tigers beat the Athletics, 6-3. After the game Tigers players – few of whom liked Cobb – surprisingly voted to strike in protest of the suspension. They sent a telegram to Johnson declaring they would not take the field again until Cobb was reinstated. Johnson responded by threatening to enforce the National Commission’s fine for every game in which the Tigers failed to field a team.

Tigers owner Frank Navin anticipated that the players might refuse to take the field without Cobb. He also knew that a forfeit would carry a $5,000 fine, which in 1912 was more than many players made in a year, and potentially result in the loss of the franchise.7 To avoid these penalties, Navin instructed Jennings to have a team ready to take the field. Jennings and his coaching staff, with the help of Joe Nolan, a sportswriter for the Philadelphia Bulletin, put together a makeshift roster of 12 replacement players to take the field if necessary. Eight of the players never appeared in another major-league game, three members of the Tigers (Jennings and Detroit coaches Joe Sugden and Deacon McGuire) came out of retirement, and one made his debut in the game and played in one more major-league game four years later.8

As game time approached, a surprising crowd of 15,000-plus flowed into the ballpark on what was a bright, sunny afternoon. When umpire Bill Dinneen called “Play ball!” at 2:30 P.M., the Tigers regulars took the field. Cobb sheepishly strolled out to his customary spot in center field until umpire Ed “Bull” Perrine waved him off. Cobb stalked off the field with the rest of the Tigers following behind. They returned to the visitors’ clubhouse and removed their uniforms. With that, the first-ever major-league players strike was on.

Now the ball was in Jennings’ court. He quickly signaled for the “strikebreakers” to come into the clubhouse and don the uniforms of the striking Detroit players. All hurriedly signed standard one-day contracts and were now officially “Tigers.” Accounts of how much the replacement players were paid vary from $10 to $50 each, depending on the report and the player. Travers, the replacement pitcher, was reported to have received $50 after showing the best deliveries during the pitching tryouts.10

With the regular Tigers watching from the upper pavilion, the replacement Tigers took the field.11 Travers, a student at nearby St. Joseph’s College, drew the starting assignment for the Tigers, while 41-year-old Sugden played first and 48-year-old Deacon McGuire was the catcher. Athletics manager Connie Mack showed little sympathy for the Tigers’ plight and started right-hander Jack Coombs, who entered the game with a record of 1-1, and most of the Athletics regulars, including their $100,000 infield of Frank “Home Run” Baker, Jack Barry, Eddie Collins, and John “Stuffy” McInnnis.12

Philadelphia touched Travers for three runs in the first and another three in the third to take a 6-0 lead. By this time an estimated 2,500 to 3,000 fans returned to the box office and demanded a refund.13 The protesting fans were informed that no money would be refunded, but they would be given a rain check if they desired. Many of the dissatisfied fans returned to their sun-drenched seats and continued to watch “the greatest farce” in baseball history.14

Rookie right-hander Boardwalk Brown relieved Coombs to start the fourth.15 The Tigers trimmed the lead to 6-2 in the top of the fifth before the Athletics answered with eight runs in the bottom of the fifth and four more in the sixth to extend their lead to 18-2. Another rookie, little-used left-hander Herb Pennock, came on in the top of the seventh and pitched three scoreless innings as the Athletics added four more runs in the seventh and two in the eighth to account for the 24-2 final score.16

The Athletics got 26 hits and were aided by seven Detroit errors. Philadelphia was led offensively by Collins, who scored four runs on five hits, with five stolen bases. Right fielder Danny Murphy also scored four runs and had two of the team’s 10 stolen bases, and center fielder Amos Strunk had four hits in six trips to the plate.

The replacement Tigers produced two notable highlights on the day. Ward, playing right field in place of Crawford, made a leaping catch of Barry’s second-inning drive to deep right-center. When he realized he had caught the ball, Ward may have been the most surprised young man in the world.17 Irwin, who came on to play third after Maharg was knocked out of the game when he lost of couple of teeth attempting to field a shot to third base, was the only recruit to get a hit. Irwin went 2-for-3 with triples in the fourth and ninth innings. Neither hit factored into the scoring.

After graduating from St. Joseph’s College in 1913, Travers, who pitched the entire game, entered the Society of Jesus (Jesuits) and studied at St. Andrew on the Hudson in New York and Woodstock College in Maryland. He was ordained into the priesthood in 1926. Father Aloysius S. Travers, S J., became known as the “Man who saved the Detroit franchise,” and to this day is the only Catholic Priest to play in a major-league game.18

Years later Travers recalled his one day in the big leagues and his approach toward facing the defending World Series champion Athletics.

I was throwing slow curves and the A’s were not used to them and couldn’t hit the ball. Hughie Jennings told me not to throw fast balls as he was afraid I might get killed. I was doing fine until they started bunting. The guy playing third base had never played baseball before. I threw a beautiful slow ball and the A’s were just hitting easy flies. … Trouble was, no one could catch them.19

After the game Cobb urged his teammates to end the strike. The regular Tigers returned to the field leaving Travers and the other replacement players as a footnote to the first labor strike in baseball history.

9 The shadowy Billy Maharg later played one game for the 1916 Phillies and later gained notoriety when he resurfaced as a gambler, fixer, and informer in the notorious 1919 Black Sox scandal.

15 Coombs was credited with the victory despite pitching only three innings.

16 Pennock was retroactively credited with a save.