The walk-off home run is the most dramatic and emphatic of baseball plays and every home-team fan thinks of nothing less when its possibility arises. The reaction on the field to a walk-off home run is quite predictable. As the ball leaves the playing field and the batter circles the bases, the visiting team is quickly heading to the dugout, the home team emerges to surround home plate and the umpires stand by just to make sure that the batter touches every base. Then the celebration can begin! On this night, Ryan Zimmerman hit his 10th career walk-off home run.1 “Mr. Walk-Off” had done it again!2

The term “walk-off” didn’t enter the baseball lexicon until 1988 as noted by Paul Dickson. “The term was coined by Oakland Athletics pitcher Dennis Eckersley for that lonely stroll from the mound after a pitcher gives up the winning run (Gannett News Service, July 30, 1988)”3 Eckersley’s use of the term had a rather negative connotation marking the losing pitcher as he leaves the field.4 Common usage has evolved now to highlight the achievement of the batter and the celebratory mood of the winning team and its fans.

On this night, a crowd of 37,355 saw a pitching matchup of Gio Gonzalez (3-2, 3.62 ERA) for the Nationals and Nathan Eovaldi (3-1, 4.14 ERA) for the Yankees. Eovaldi was in his first season with the Yankees after a winter trade from the Miami Marlins.

The Nationals struck in the first inning on solo home runs by Ian Desmond and Bryce Harper to take a 2-0 lead. Gonzalez got through the Yankee lineup perfectly for the first three innings, but lost his pitching command quickly in the fourth inning. Two walks were surrounded by run-scoring hits by Chris Young, Chase Headley, and Stephen Drew, and the Yankees jumped ahead 4-2. In the top of the fifth inning, the Yankees added two more runs. Mark Teixeira hit his 12th home run of the year, scoring Carlos Beltran ahead of him. The Yankees now led 6-2 and Gonzalez’s day was done after five innings.

Fortunately for the Nationals, they responded with four consecutive hits against Eovaldi in their half of the fifth to make it a game. Clint Robinson’s one-out double to right-center field scored Danny Espinosa, who had walked. Singles by Denard Span, Ian Desmond, and Yunel Escobar made it 6-5 and Eovaldi’s day was also done. When Wilson Ramos homered off David Carpenter in the bottom of the sixth inning, it was a new ballgame and Ramos had extended his hitting streak to a league-best 19 games.5

With the score tied, the remainder of the game was going to be a battle of the bullpens. Inevitably, the Nationals were going to have to face the back end of the Yankee bullpen, Dellin Betances and Andrew Miller. Betances and Miller had pitched in 19 and 17 games, respectively, in the Yankees’ first 39 games and neither pitcher had surrendered an earned run. The Nationals’ bullpen was up to the task. The combined efforts of five Nationals relief pitchers, Blake Treinen, Matt Thornton, Aaron Barrett, Drew Storen, and Matt Grace, limited the Yankees to two singles over five innings as the Nationals came to bat in the bottom of the 10th. They had faced Betances in the eighth and ninth innings without much success – a walk erased by a double play and three swinging strikeouts. Now it was Andrew Miller’s turn.

Miller, with 13 saves to his credit, got Ian Desmond and Bryce Harper to strike out swinging around a walk to Yunel Escobar. As Ryan Zimmerman came to bat, Miller had yielded only three hits to the last 70 batters he had faced.6 A 3-and-1 fastball was his undoing and Zimmerman nailed the right-field foul pole for the 10th walk-off home run of his career.

With that home run, Ryan Zimmerman joined elite company including Reggie Jackson, Mike Schmidt, Barry Bonds, and former Nationals player Adam Dunn, tied for 10th place in career walk-off home runs.7 Jim Thome holds the career mark with 13.8 Of the 18 major leaguers who have hit 10 or more walk-off home runs, only Zimmerman and Albert Pujols were active players as of the 2017 season.

No essay on the home runs of “Mr. Walk-Off” would be complete without subjectively capturing the best of these dramatic moments. For this fan, three of Ryan Zimmerman’s walk-off home runs stand out above the rest. It was June 18, 2006, Father’s Day, and Zimmerman’s parents were at RFK Stadium to watch him play. With Marlon Anderson on first and the Nationals trailing the Yankees 2-1, Zimmerman hit Chien-Ming Wang’s first pitch for the first walk-off home run of his career. “Zimmerman told reporters he had never ended a game with a hit, much less a homer, in Little League, high school or at the University of Virginia. “No walk-off, nothing,” he said. “No single. Nothing.”9

On March 30, 2008, Nationals Park was opened before a nationally televised audience in the first game of the major-league season as the Nationals hosted the Atlanta Braves. With two outs in the bottom of the ninth inning, Atlanta pitching had retired 24 consecutive batters, but on a 1-and-0 count, Zimmerman hit his fourth career walk-off home run to deep center field off Peter Moylan for a 3-2 victory.10

He hit his eighth walk-off home run at Nationals Park on August 19, 2011, to cap the most dramatic of finishes, a six-run rally and an 8-4 rain-delayed victory by the Nationals over the Phillies. It started with Jayson Werth frustrating former teammate Ryan Madson in a memorable 11-pitch at-bat and singling sharply to left field.11 It was to be a long inning for Madson. Three more singles wrapped around an intentional walk tied the score at 4-4. It finished past midnight with Zimmerman hitting Madson’s two-out, full-count 38th pitch of the ninth inning for a grand slam. “The pressure’s on him, man,” Zimmerman said. “It’s not on me.”12

For the Nationals, the victory against the Yankees marked an early-season recovery from last place in the National League East. On April 27, the Nats were six games under .500 and eight games out of first place. At 23-17, they were now tied with New York Mets for first place in the NL East. They seesawed with the Mets for first place for several months, but on August 3 a loss to the Arizona Diamondbacks knocked them back to second place and there they stood for the remainder of the season. 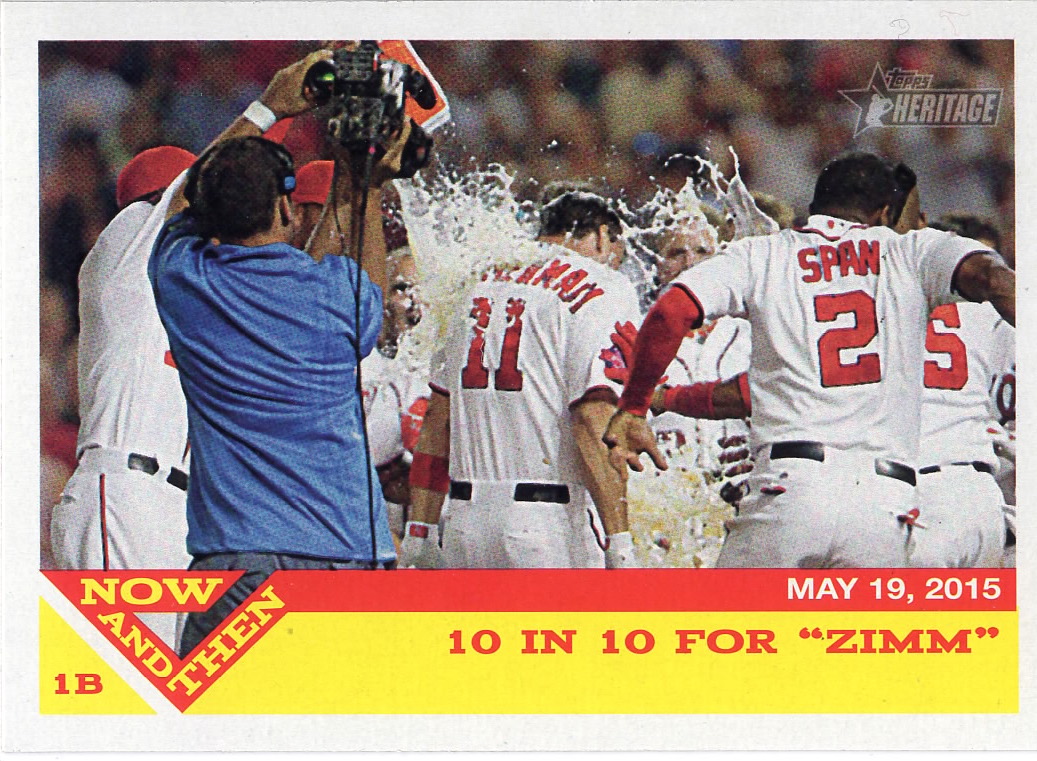 Through downright luck, we had the perfect view of the right-field foul pole from our seats down the third-base line in Section 205. This was not to be the kind of walk-off home run for which the view of the ball sailing out toward the seats immediately signaled game over. However, I learned at a very young age as a Brooklyn Dodgers fan to treasure every victory over the New York Yankees, making the occasion of Ryan Zimmerman’s 10th career walk-off home run even sweeter.

The author accessed Baseball-Reference.com for box scores/play-by-play information (baseball-reference.com/boxes/WAS/WAS201505190.shtml) and other data, as well as Retrosheet.org (retrosheet.org/boxesetc/2015/B05190WAS2015.htm).

4 Although unconfirmed by the author, it is quite possible that Dennis Eckersley was referring to the Oakland-Seattle game at the Kingdome on July 29, 1988. Eckersley came into the game in the 10th inning seeking his 31st save of the season with the A’s leading 3-2. Instead, Steve Balboni hit a three-run game-winning home run for the Mariners and the walk-off began.

8 As reported by Jaffe and MLB.com as well, this type of data goes back only to 1938 on Baseball-Reference.com and isn’t considered fully complete going back beyond 1973. For example, Mel Ott, who hit 511 home runs in his career, has just four recorded walk-off home runs, but 425 home runs wouldneed to be researched to determine if any were walk-off’s. (Paul Casella, “Zimmerman’s 10th Walk-Off Homer an Elite Feat,” MLB.com, May 20, 2015, accessed August 17, 2017, m.mlb.com/news/article/125474294/nationals-ryan-zimmermans-10th-walk-off-homer-an-elite-feat/.)