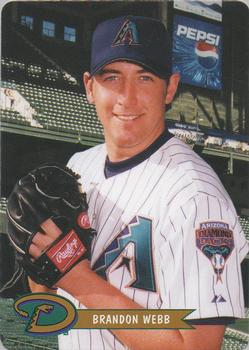 Expectations for the Atlanta Braves heading into the 2006 season were that they would make the playoffs. They were riding a current postseason streak of 14 straight appearances, and there was no indication that it wouldn’t become 15.

For the Arizona Diamondbacks the picture wasn’t as clear. The team had shocked baseball with its thrilling World Series victory in 2001 in just its fourth year of existence, but lost 111 games just three seasons later.

The Braves headed out for a nine-game road trip riding a four-game winning streak that improved their record up to 21-20 and left them 3½ games behind the Eastern Division-leading New York Mets. Their first stop on the trip was in Phoenix to play the Diamondbacks, the current leaders in the NL West Division.

Arizona won the first game of the series, 10-9, on a walkoff hit by Craig Counsell, and would be throwing its ace, Brandon Webb, in the second game, on Saturday night, May 20. The Braves countered with 33-year-old journeyman right-hander Travis Smith.

Pitching before an audience of 35,382, Smith and Webb matched zeros over the first three innings. In the fourth, the Diamondbacks capitalized  on a fielding error by third baseman Chipper Jones that led to two unearned runs. Eric Byrnes reached first on the error. Chad Tracy doubled to right field, and Byrnes scored in a collision with Braves catcher Brian McCann. McCann was charged with an error and had to leave the game with a sprained left ankle.1 Tracy went to third on McCann’s error and scored on Luis Gonzalez’s fly ball to left field.

The Diamondbacks got two more runs in the fifth inning increasing their lead to 4-0 and sending Smith to the showers. Johnny Estrada and Orlando Hudson hit leadoff singles and moved up a base on Webb’s sacrifice. Craig Counsell drove in Estrada with a single to right and Byrnes’s bloop single to center scored Hudson.

Leading 4-0 after six innings, Arizona opened the floodgates in the seventh, scoring six runs against relievers Lance Cormier and Oscar Villarreal, five of them with two outs.

Byrnes and Hudson both had RBI hits and Estrada drove in a run the hard way, getting hit by a pitch with the bases loaded. But the big blow came from pitcher Webb. After Conor Jackson’s double-play grounder retired two (including Byrnes at the plate), Shawn Green was intentionally walked to load the bases. Estrada’s hit by pitch forced in one run, and Hudson’s RBI single scored another. This brought Webb to the plate with the bases still loaded. Webb drove an 0-and-1 pitch from former teammate Villareal2 over the head of Andruw Jones and off the wall in in center field, clearing the bases.

The Diamondbacks added three more runs in the eighth, giving them their final 13-0 lead. Byrnes and Chad Tracy opened the inning with back-to-back homers, then Luis Gonzalez doubled to center and scored on Jackson’s single.  Byrnes’s home run gave him three RBIs in the game, matching Webb’s total. Tracy drove in two.

Webb held the Braves to four hits, all singles (two by Chipper Jones). Arizona Republic sportswriter Bob McManaman wrote, “(Webb’s) sinkerball induced 18 ground-ball outs as he recorded his fourth complete game and second shutout of his career, his first since his rookie season in 2003.”3 Webb struck out eight and walked one.

The game was played in 2 hours and 29 minutes.

The Braves won the third game of the series, 2-1, and finished May with an 18-11 record, their best month of the season. But they went 6-21 in June and couldn’t catch up, finishing 79-83 and missing the postseason for the first time since 1990.

By virtue of winning his seventh decision in a row, Webb tied Randy Johnson’s team record, set in 2000. Webb’s three RBIs in the game were the most he had in a game in his career (2003-2009).

Webb won his next start to run his record to 8-0 but was 8-8 thereafter for a 16-8 record that won him the National League Cy Young Award for 2006. He finished second in Cy Young voting in each of the next two seasons before shoulder injuries ended his career.

For the Braves, Greg Maddux and Tom Glavine were gone but John Smoltz was still around and led the staff in wins with 16 at the age of 39. The Jones boys, Chipper and Andruw, turned in solid seasons as usual but it wasn’t enough.

In addition to the sources cited in the Notes, the author relied upon Retrosheet.org and Baseball-Reference.com. Thanks to Bill Staples Jr. for assistance providing newspaper articles.

2 Webb and Villarreal were teammates on the Diamondbacks in the 2003-2005 seasons.