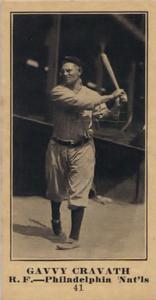 Philadelphia Phillies outfielder Gavvy Cravath and pitcher Tom Seaton enjoyed their finest seasons in 1913. Cravath led the National League in hits, home runs (19), and slugging percentage, while setting a league record for runs batted in (128) that was not surpassed until 1922. He placed second in batting average at .341 (behind only Jake Daubert’s .350), ranked fourth in doubles, and tied for fourth in triples. Meanwhile, Seaton topped the league with 27 wins, and led the NL in innings pitched and strikeouts. Boosted by their fine play, the Phillies had the highest winning percentage in the NL from May 4 through June 29, and ultimately placed second, their best finish since 1901.

This Philadelphia duo was unstoppable on May 21, when the first-place Phillies crushed the last-place Cincinnati Reds, 12-0, at the Baker Bowl in Philadelphia. Each produced his best individual performance of the season, with Cravath leading the offense and Seaton pitching a shutout “with ridiculous ease.”1 Cravath hit safely all five times at the plate, drove in six of Philadelphia’s 12 runs, and scored two. Seaton improved his pitching record to 7-0, surrendering just three hits, his season low, and striking out seven. He chipped in on offense, too, lining a two-run home run that bounced over the three-foot-high fence and into the bleachers in left field. With both Philadelphia stars at the top of their game, Cincinnati was overwhelmed.

The game might well have been canceled. Hard rain fell all morning, with the downpour lasting until noon. Even after the rain stopped, conditions remained damp and chilly, and the field soft and in poor shape for a game. Phillies manager Red Dooin insisted on playing, although it was unlikely many spectators would come out to see a poor opponent in awful weather. The Phillies had compiled a 13-3 record on their current homestand, and had an undefeated pitcher ready to take the mound, so probable victory seemed better to Dooin than a bigger gate and better field conditions later in the season. His instincts proved to be correct.

The Reds started on a promising note. Speedy leadoff hitter Bob Bescher made it to second after Philadelphia shortstop Mickey Doolin threw his grounder past first base. The next batter, Johnny Bates, flied out to center fielder Dode Paskert, who threw out Bescher trying for third base after the catch. The third out followed, and the Reds did not seriously threaten to score after that.

Philadelphia scored four runs in the bottom of the first off Reds starter Chief Johnson. The Phillies filled the bases on two singles and an error by Cincinnati second baseman Marty Berghammer. That brought up Cravath, who cleared the bases with a triple off the stone wall beyond the flagpole in right-center field. When Reds outfielder Bates threw wildly back to the infield after retrieving the ball, Cravath raced across home plate with Philadelphia’s fourth run.

The Phillies added two in the third. Otto Knabe singled and was bunted to second. He stopped at third on Sherry Magee’s single, but scored on a single by Cravath, who collected his fourth RBI. A sacrifice fly by Fred Luderus brought in Magee and stretched the lead to 6-0.

The first two pitches from Cincinnati reliever Frank Harter in the fourth resulted in two more Philadelphia runs. Bill Killefer singled on Harter’s first pitch, and Seaton drove his second pitch into the bleachers on a hop to increase the Phillies’ lead to 8-0. As the Cincinnati Enquirer lamented, almost any bounding ball eluding a fielder is likely to go over such a low fence and into the bleachers for a home run,2 so it should be prevented by a ground rule.3 In the sixth, the Phillies’ lead climbed to 10-0, when Cravath singled —his fourth hit —and Luderus homered over the right-field wall. Although Luderus was overshadowed by Cravath, he too had an outstanding game, garnering three hits —a single, double, and home run —and three runs driven in.

Knabe reached on an error in the seventh and advanced to third on Magee’s double. Cravath singled them both home for the final two Philadelphia runs, and his fifth and sixth RBIs of the day. The Phillies’ final count was 12 runs on 20 hits.

Seaton walked four and gave up three singles, one each in the third, fifth, and eighth innings. He never did retire Bescher, who, after reaching on the first-inning error, also walked twice and singled. Three Cincinnati runners arrived at second base, but none went further. It was one of five shutouts for Seaton in 1913, but his only shutout in quirky Baker Bowl. Jack Ryder of the Cincinnati Enquirer praised the Phillies for “playing wonderful ball and leading the league strictly on their merits.”4

One bright spot for Cincinnati was the defense of center fielder Beals Becker, who was credited with three outfield assists. Two of his throws completed double plays, and the third, after Mickey Doolin’s first-inning fly out, prevented yet another RBI by Cravath. Becker deprived Cravath of another RBI by throwing out Knabe at home in the fourth inning after fielding Cravath’s single. In the seventh, Becker caught a fly off the bat of Paskert and threw to second before the Phillies baserunner could return to the base, chalking up his second double play of the gloomy afternoon.

The Phillies were unable to maintain their great play, finishing in second place with a 88-63 record, 12½ games behind the New York Giants (101-51), who claimed their third consecutive NL pennant, and second consecutive season with more than 100 wins. Philadelphia dropped to sixth in 1914 after losing Seaton, Knabe, Doolin, and pitcher Ad Brennan to the Federal League. But in 1915, with Cravath hitting 24 home runs and Pete Alexander winning 31 games, Philadelphia won its first NL pennant.

1 Jack Ryder, “Fire Engine Needed by the Redlegs to Extinguish Phillies When They Once Get Started,” Cincinnati Enquirer, May 22, 1913: 8.

2 The dimensions of Baker Bowl changed frequently. From 1910 through 1921 the left-field fence was 335 feet from home plate, and from 1910 to July 1929 it was only three feet high. Philip J. Lowry, Green Cathedrals: The Ultimate Celebration of Major League and Negro League Ballparks (New York: Walker Publishing Company, 2006), 173.

3 Until 1929 in the American League and 1930 in the National League, a batted ball that bounced into the stands in fair territory from the playing field was a home run. The leagues’ rule changes made such hits a double.