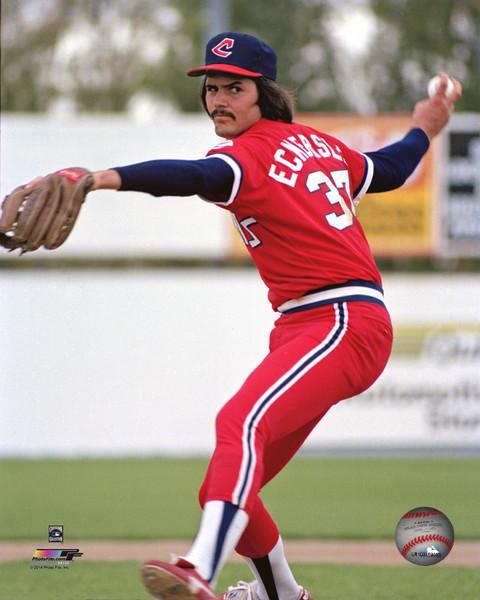 Frank Robinson stuck to his word. The Cleveland Indians manager was impressed with the pitching of his 20-year-old righty Dennis Eckersley. The Oakland native posted a remarkable record at San Antonio of the Double-A Texas League. Eck went 14-3 with a 3.40 ERA for the Brewers, totaling 163 strikeouts against 60 walks. But was he ready to make the jump from Double A to the majors, skipping the highest level of the minor leagues?

Eckersley made his major-league debut on April 12, 1975. He made 10 appearances out of the bullpen before getting his initial starting assignment on May 25. Circumstances interceded and perhaps Eck was ushered into the starting rotation sooner than anyone expected.

Jim Perry had begun the season in the Tribe’s rotation. But after he started the season at 1-6 with a 6.69 ERA, Perry was demoted to the bullpen. Likewise, Dick Bosman was off to a 0-2 mark with a 4.08 ERA after three starts and three appearances out of the pen.

Both pitchers were traded to Oakland on May 20, for pitcher John “Blue Moon” Odom. And Eckersley emerged from the bullpen to take Perry’s spot in the rotation.

As fate would have it, Eckersley’s first assignment was against the Athletics in the first game of a doubleheader. The three-time world champions were a tough outfit for even the most talented hurler. The A’s had a stacked lineup with Reggie Jackson, Joe Rudi, Sal Bando, Gene Tenace, Bert Campaneris, Bill North, and two up-and-comers: Claudell Washington and Phil Garner. As if their lineup was not daunting enough, longtime Chicago Cub Billy Williams was added as a designated hitter. The “Sweet Swingin’” one was the author of 392 home runs in the NL and eventually would take his place among the greats of the game in Cooperstown.

Oakland countered with — who else? — Jim Perry. The former Cy Young Award winner was making his first start for the A’s, and he was in familiar territory, having had two tours of duty with Cleveland (1959-1963, 1974-1975). The ingredients to ensure a big crowd were properly mixed: a Sunday doubleheader, the world champs, a holiday weekend, and Cleveland Press “Jacket Day” resulted in a crowd of 48,978 who made their way to Cleveland Stadium.

The Indians gave rookie Eckersley a one-run lead in the bottom of the first inning. With one out, Rick Manning singled and advanced to second base on a groundout by George Hendrick. Manning scored when Rico Carty singled to center field.

The Tribe tacked on a single tally in the bottom of the third. Cleveland loaded the bases on a leadoff walk to Hendrick, a single by Carty, and a walk to Robinson. Perry was removed from the game, replaced by Paul Lindblad. Oscar Gamble greeted Linblad with a single to right to plate the Indians’ second run. The inning was not without injury. Jack Brohamer slid hard into second base to break up an inning-ending double play and injured his left knee. Although it was not believed at first to be a serious injury, Brohamer was lost for almost two months.

Eckersley was pitching a shutout through four innings. The A’s were able to get a runner on base, but Eck was keeping them off the board.

Meanwhile, Eckersley was beginning to feel the effects of the heat. He was routinely given ammonia capsules, oxygen, and an iced towel in an effort to cool him off. “I was giving them my fastball until I began to feel a little dizzy from the heat,” said Eckersley. “My stomach cramped up, too. Then I went to my sinker. It sank more, the more tired I got. So I stayed with it the rest of the way.”2

Cleveland tacked on two more runs in the bottom of the eighth inning to make the final score 6-0. Eckersley went all nine innings, striking out six and walking two. “The kid has got it right here,” said Robinson, pointing to his heart. “He was worn out in the fifth inning by the heat. He hasn’t pitched that long in a year.”3

Carty was the star on offense. He went 4 for 5 with two RBI.

Dick Bosman pitched the nightcap for Oakland as the A’s salvaged a split with a 6-3 win, and took the series, three games out of four. The A’s won the West Division for the fifth consecutive season, but were eliminated by Boston in the ALCS.

Eckersley proved that his effort was no fluke. His next time out was on May 31, in Oakland. Before family and friends at Oakland-Alameda County Coliseum, Eck pitched the Indians to a 4-1 victory. He again went the distance, striking out five and walking one. For the season, Eckersley was 13-7 with a 2.60 ERA. He led the Indians in ERA and strikeouts (152) in 1975.

The author accessed Baseball-Reference.com for box scores/play-by-play information (baseball-reference.com/boxes/CLE/CLE197505251.shtml) and other data, and Retrosheet (retrosheet.org/boxesetc/1975/B05251CLE1975.htm).