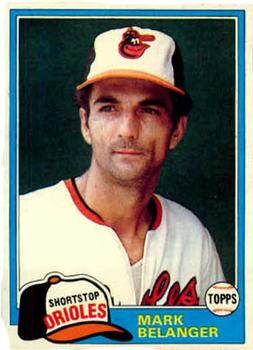 Two big-game pitchers faced off: Jim Palmer for Baltimore and Ron Guidry for New York. Palmer retired the Yankees in order in the top of the first. Al Bumbry singled to start the bottom of the inning. With Rich Dauer batting, Bumbry took off for second. Yankees catcher Rick Cerone threw wild, allowing Bumbry to motor to third. Dauer then lifted a fly ball to center, bringing in Bumbry with an unearned run.

The second inning featured three homers. Reggie Jackson smacked a solo home run for the Yankees, his sixth of the season. The Orioles responded with two in their half. DeCinces hit a two-run shot with Benny Ayala aboard, and two batters later, Belanger connected off Guidry. Belanger was “the most electric defensive shortstop of his generation,”1 but was also an offensive liability. As of 2016, he held the American League record for being pinch-hit for: 333 times.2 On this evening, however, skipper Earl Weaver let Belanger swing away for four at-bats. His 1-for-4 performance actually raised his batting average to .167 for the season.3 The uncharacteristic blast was the Baltimore shortstop’s first home run since 1977. It was the 20th and final home run of his major-league career.

Baltimore added four runs in the bottom of the fifth inning. Bumbry and Dauer opened with back-to-back singles. After a force out and fielder’s choice, Baltimore had Ken Singleton at second base and Eddie Murray at first. Ayala singled to left field, driving in Singleton and sending Guidry to the showers. DeCinces greeted reliever Doug Bird with a three-run home run. Baltimore now had an 8-1 lead.

In the seventh with no outs, Dauer, Singleton, and Murray each singled (Dauer scored on Murray’s hit), and Dave LaRoche replaced Bird. Ayala hit a foul pop to the right side, but Yankees first baseman Dave Revering dropped it for an error. Ayala, with new life, hit a sacrifice fly to center, plating John Lowenstein, who was running for Singleton, with the Orioles’ 10th run of the game.

Baltimore put together a 12-hit attack (three home runs) against New York. Two sacrifice flies helped drive in runs. Including the two in this contest, DeCinces had four home runs in his last four games.

Ayala contributed three singles and a sacrifice fly to the Baltimore offense. He scored two runs and drove in two.

The solo home run by Reggie Jackson (his sixth of the season) was the Yankees’ only scoring as Palmer pitched a complete game. The victory raised Palmer’s record for the season to 3-2, and his ERA dipped to 2.74. The right-hander lifted his lifetime record against the Yankees to 26-154 and was career victory number 244.

Guidry’s record fell to 4-3. He had been dealing with a sore right foot, which “hamper[ed] his motion and limit[ed] his effectiveness.”5 After the game, he said, “If we had four real healthy starters, I might ask to miss a turn.”6 Guidry did not finish the fifth inning and allowed seven runs on eight hits. Bird was touched for three runs in 1⅓ innings. LaRoche pitched two innings for New York, allowing only two walks, but did permit an inherited runner to score.

This was the second straight game in which the Yankees were humiliated; the Cleveland Indians had trounced them, 12-5, the day before at Yankee Stadium. After that loss, New York owner George Steinbrenner threatened that there would be “hell to pay.”7 The Yankees made three errors in each of the losses. Manager Gene Michael told reporters, “I realize that during a baseball season, there are days when you get crushed, but this has been two days in a row. I know when that happens sometimes you can’t stop it.”8 New York also lost the next two games in Baltimore, giving the Yankees their first four-game losing streak of the season (matched once later in the season). But Guidry turned it around and went 7-2 for the rest of the season.

Baltimore had been swept in a doubleheader the day before in Detroit but remained in first place with a record of 25-14. The 1981 season was shortened by a players strike.9 This game was played before the strike began. When the strike began, the Yankees were 34-22 and Baltimore was 31-23. After play resumed, the Orioles were 28-23, and New York fell to 25-26. Because of the unique playoff structure necessitated by the strike, the Yankees made it into the postseason despite having a worse record (59-48) than the Orioles (59-46). The Yankees beat Milwaukee in the Division Series (3-2) and swept Oakland in the League Championship Series (3-0), but lost to the Los Angeles Dodgers in six games in the World Series.

In addition to the sources cited in the Notes, the author consulted baseball-reference.com, mlb.com, and retrosheet.org. The author was present at this game.

2 Ibid. Belanger also had 155 sacrifices in his career.

9 The strike stopped play from June 12 to August 9. The season was divided into two halves; the teams atop the standings in the first and second halves played each other in a best-of-five divisional round prior to the League Championship Series.