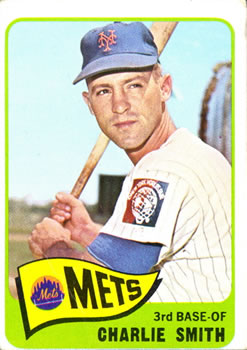 The New York Mets arrived in Chicago after losing two of three games in Houston. They were on the tail end of a road trip and had lost nine of 12 games. Over the past week alone, they had lost six of seven games while scoring only 12 runs. There was no reason to think that they would have any better success after arriving in Chicago.

After traveling from Houston, the Mets had a day off in Chicago before playing the final three games of their road trip. At the time the Mets had the worst record in the major leagues, 11-28. The Cubs were only marginally better with a 14-20 record. They had just won a series against the Cincinnati Reds and were hoping they could enjoy similar success against the last-place Mets.

Only 2,503 fans showed up at Wrigley Field on a cloudy afternoon to watch the game. With temperatures in the high 70s, most fans were looking forward to some distraction from the events of the day. Several weeks earlier the country had been rocked by a series of protests against the Vietnam War. Civil-rights demonstrations were continuing throughout the South as Congress debated passage of the 1964 Civil Rights act.

Mets manager Casey Stengel chose Jack Fisher (1-3) to start. Fisher had lost his previous two starts. For the Cubs, skipper Bob Kennedy chose Bob Buhl to start. Buhl (4-1) had won his last three starts and was coming off a complete-game, 9-1 win in Cincinnati.

The Mets showed right away that the day off had given them some necessary rest after playing 15 games over the past two weeks. They jumped on Buhl for four runs in the first inning. Dick Smith led off by beating out a bunt down the third-base line. Ron Hunt lined a single to right and Frank Thomas walked. Jim Hickman’s single to third base scored Smith. Buhl struck out Joe Christopher for the first out, but Charley Smith smacked a two-run single and Roy McMillan hit another, and the Mets were up 4-0. Kennedy removed Buhl and reliever Wayne Schurr got the final two outs of the inning, striking out Chris Cannizzaro and getting Fisher to ground out to third.

After Fisher held the Cubs scoreless in the bottom of the first, Schurr retired the first two Mets batters, Dick Smith and Ron Hunt, in the second. But Thomas and Hickman singled. Christopher tripled them home and scored himself when Merritt Ranew, the Cubs catcher, couldn’t handle a pitch. By the time Charley Smith ground out, the Mets were up 7-0.

Schurr got the Mets out in order in the third. He was removed for a pinch-hitter in the bottom of the inning. Sterling Slaughter took the mound for the Cubs in the fourth inning and gave up two singles before getting the next three batters out.

In the Mets’ fifth, Charley Smith singled and scored on Cannizzaro’s double. Dick Smith’s third single of the game plated Cannizzaro. The Mets lead grew to 9-0.

Fisher gave up a leadoff double to Ernie Banks in the fifth, only the second hit he had surrendered. Banks scored when Billy Cowan singled.

In the sixth, Glen Hobbie took over pitching duties for the Cubs and held the Mets scoreless. But in the seventh the Mets exploded for four more runs. McMillan led off with his second single of the game and moved to second when Hobbie hit Cannizzaro with a pitch. Fisher singled. Dick Smith got his fourth hit, a double, to score McMillan and Cannizzaro, and Hunt followed with a single to score Fisher. Kennedy pulled Hobbie and brought in Jack Spring, whose balk sent Smith home. Spring got the next three batters out but the Mets’ lead had grown to 13-1. It was the most runs that they had scored in a game so far in the season.

Spring got the Mets out in order in the eighth inning. After he was pinch-hit for in the bottom of the eighth, Don Elston pitched in the ninth and was torched for six runs. After getting the first out, he gave up a triple to Dick Smith and walked Hunt. Thomas and Hickman singled. Elston hit Christopher with a pitch and Charley Smith lined a home run down the left-field line. By the time Elston retired the side, the Mets led, 19-1.

As the Mets lead grew, Fisher continued his dominance of the Cubs. After giving up a double to Billy Williams in the sixth, he didn’t allow another Cubs hit for the rest of the afternoon. Fisher got his second win of the season when Ron Santo flied out to end the game. Stengel told reporters after the game, “I suppose most of the club owners will be trying to contact me now to get my players.”1 The game was the first of three complete games Fisher pitched against the Cubs during the season. He faced the Cubs four more times, winning three of those contests.

The 19-1 pasting was the worst loss the Cubs had suffered since they lost 22-2 to the Reds in 1957. For Cubs fans, this loss was painful since it came at the hands of a Mets team that had struggled to win games in their first three years of existence.

The 18-run victory margin the largest the Mets had achieved in their short history. It was only the 10th time they had scored more than 10 runs in a winning effort. They would not see similar run production until the end of the season when they beat the St. Louis Cardinals 15-5 on October 3.

Richard Dozer of the Chicago Tribune described the game as a “massacre, which mercifully was exposed to only 2,503 paying customers and a cluster of carefree youngsters. …”2

In its report on the game, the Chicago Tribune said: “The Cubs, who need pitching worse than Stengel, obviously are among those interested in the Mets’ mound talent. But Casey put his finger on the unlikelihood of any deal between these two teams when he jested, “I understand they want to give us [Ron] Santo for a pitcher.”3

The Mets’ outburst shocked the sports world. Reportedly someone at the New York Herald Tribune shouted “The Mets scored 19 runs!” after reading a wire story about the game. Hearing this, columnist Jimmy Breslin shouted out, “But did they win?”4