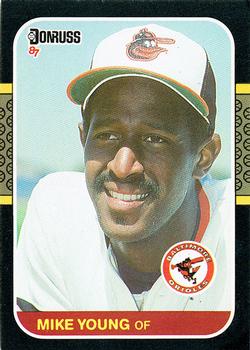 In the 30-year period from 1957 to 1986, the Baltimore Orioles compiled the best record in the major leagues, collecting three World Series championships, six American League pennants, and eight division titles along the way. And then suddenly, after winning the 1983 World Series, the team went into a rapid decline, winning progressively fewer games in each of the next five seasons. They suffered their first last-place finish in 1986. The 1987 Orioles were even worse. Eddie Murray and Cal Ripken Jr. were the only holdovers from the starting nine of the championship team of four years earlier, and their roster was littered with lumbering sluggers who were past their prime.

Baltimore’s once proud pitching staff had also fallen on hard times, posting a 5.01 ERA in 1987, worse than any big-league team other than the woeful Cleveland Indians. Their starting pitching, normally the O’s strength, was now the weakest in the American League. The lefty duo of 33-year-old Scott McGregor and 35-year-old Mike Flanagan were pale imitations of their 1983 selves. In four short years, their combined record with the Orioles slipped from 30-11 with a 3.22 ERA to 5-13 and a bloated 5.75 earned-run average in 1987.

Fortunately for the Orioles, their veteran sluggers were able to carry the team through the first seven weeks of the 1987 season, and the team entered its May 28 game against the California Angels on a five-game winning streak, which moved it into third place with a surprising 25-20 record. Baltimore sent its ace, Mike Boddicker (4-1, 2.28 ERA), to the hill looking for a sweep of the two-game series. The Angels countered with 23-year-old right-hander Willie Fraser, who had an impressive 2.51 ERA in his 10 appearances, five of which were starts. Fraser was hoping to snap the five-game losing streak that had dropped California into fifth place in the Western Division with a 21-24 record.

The two teams combined to club five home runs in the first four innings, with the Orioles jumping out to a 5-1 lead. The rookie Fraser served up four of the homers. Larry Sheets went deep in each of his first two at-bats, launching a two-run shot in the second inning and a solo blast in the fourth. The other Baltimore round-trippers were solo home runs by Ripken and 36-year-old Rick Burleson.1 The lone California run came on a solo home run by Ruppert Jones in the top of the third.

The Angels cut the deficit to 5-2 when they added a run in the top of the fifth on an RBI single by their young first baseman, Wally Joyner. In the bottom of that inning, they brought in 24-year-old lefty Chuck Finley to replace Fraser, triggering Baltimore manager Cal Ripken Sr. to use Mike Young as a pinch-hitter for the left-handed DH Jim Dwyer.2 Young struck out, but the substitution would pay significant dividends later in the game.

The 27-year-old switch-hitter had returned from thumb surgery two weeks earlier and, with the Orioles bats booming, he was still battling for regular playing time. Young had finished fifth in the 1984 Rookie of the Year voting and posted what turned out to be a career year in 1985, batting .273 with 28 home runs and 81 RBIs. He struggled in 1986 and was sent to the minors in late July. He returned a month later and hit .288 for the remainder of the year. The late-season performance was enough to persuade the Orioles to pencil him in as their full-time DH for 1987, although those plans were shelved when Young injured his thumb in the second exhibition game of the spring.

The Angels continued to whittle away at the lead in the top of the sixth inning. Dick Schofield chased Boddicker from the game with an RBI double, and Mark McLemore singled off lefty Jack O’Connor to plate Schofield and make the score 5-4. It remained that way until Joyner led off the top of the ninth inning with a game-tying solo home run off Ken Dixon.

After the Orioles were held scoreless in the bottom of the ninth, California pinch-hitter Mark Ryal opened the 10th inning with a double off Dixon. One out later, center fielder Gary Pettis drove Ryal home with a single to give the Angels their first lead of the game.

Young, now 4-for-22 in the season with no extra-base hits, led off the bottom of the 10th inning against DeWayne Buice. The rookie right-handed reliever had a devastating forkball, and he was quickly becoming one of the most effective hurlers in the Angels bullpen. Batting from the left side, Young connected on a Buice fastball for a solo home run that tied the game at 6-6.3

The score remained tied into the top of the 12th when the Angels put runners on first and third with one out on singles by Darrell Miller and Schofield. Pettis followed with a grounder to the second baseman, Burleson, who threw to first for the second out. Schofield, after initially retreating toward first base, was caught in a rundown and eventually made it safely into second by evading Murray’s tag. While the Orioles were in the process of botching the rundown, Miller scampered home to give California a 7-6 lead.

Buice tempted fate by issuing a leadoff walk to Lee Lacy in the bottom of the 12th. As was the custom of the day, the home team played for the tie when trailing in extra innings, and so Ripken Sr. ordered the next batter, Young, to put down a sacrifice bunt despite having homered off Buice two innings earlier. Young bunted the first two pitches foul before swinging away and fouling off pitch number three. The next pitch from Buice was a forkball that Young, once dubbed “Mighty Mike Young” by his former manager Earl Weaver, hammered over the Angels bullpen in right-center field for a two-run, walk-off home run.4

“I got to give him credit on that second one,” Buice admitted afterwards. “It was a good pitch, low and away. I didn’t make a mistake. He hit my best stuff.”5 Young accepted responsibility for his two failed sacrifice attempts in his postgame comments. “My job was to get the bunt down,” he said. “I didn’t do it.”6 To the surprise of few, Ripken Sr. said that Young wouldn’t be fined for his inability to lay down a bunt in a key situation.7

Baltimore’s six home runs in the game were the most ever hit by the team at Memorial Stadium.8 The eight round-trippers slugged by the two clubs also set a single-game record for the most combined home runs at the ballpark.9 Young’s second homer gave the Orioles the major-league record for the most home runs (56) in one month, surpassing the 55 hit by the New York Giants in July of 1947 and the Minnesota Twins in May of 1964. The O’s hit two more that May to extend the record to 58.10

Young became only the fifth major leaguer to hit two extra-inning homers in a game and the first since Ralph Garr of the Atlanta Braves turned the trick against the Mets on May 17, 1971.11 Young also posted an exceptionally high Win Probability Added (WPA), a measure of an individual player’s impact on the outcome of a game.12 His WPA of 1.087 (or 108.7 percent) turned out to be the third highest WPA posted in any big-league game in the 1980s.13

The walk-off win moved the Orioles six games over .500, although that turned out to be their high-water mark for the 1987 season. With Flanagan on the DL with an elbow injury, the pitching collapsed, and the team lost 30 of its next 35 games to drop out of the race. The beleaguered pitching staff was lit up for a combined 6.25 ERA in those 35 games. Baltimore finished with a dismal 67-95 mark, the team’s worst winning percentage (.414) since 1955. To make matters worse, the Orioles’ farm system had become barren, and so owner Edward Bennett Williams fired both GM Hank Peters and farm director Tom Giordano in the offseason.

The team finally hit rock bottom in 1988, dropping its first 21 games of the season on the way to setting a team record for futility with a record of 54-107.14 The Orioles’ playoff drought lasted until 1996 when the team made the first of two back-to-back appearances in the American League Championship Series.15

2 Although Chuck Finley made his major-league debut in relief on May 29, 1986, he was still being used in a mop-up role for much of the 1987 season. Finley was converted to a starting pitcher when John Candelaria was traded away in September of 1987, which created an opening in the Angels rotation.

8 The Cleveland Indians also hit six home runs in a game at Memorial Stadium (June 10, 1959). In the 38 years that the Orioles played in Memorial Stadium (1954-1991), no team ever hit more than six home runs in a game there. As of the end of the 2019 season, the single-game team record for home runs in Baltimore was eight, set by the Orioles against the Phillies on June 16, 2015 and equaled by the Minnesota Twins on April 20, 2019, at Oriole Park at Camden Yards.

9 The record of eight home runs by both teams in a single game at Memorial Stadium was never broken. As of the end of the 2019 season, the record for most combined home runs in a game at Oriole Park at Camden Yards was 11. It was set on July 1, 1994 by the Orioles and Angels and matched on April 20, 2019 by the Orioles and Twins.

10 The major-league record for most home runs in a month (58) was equaled a dozen years later by the Seattle Mariners in May of 1999. Baltimore and Seattle shared the record until the Yankees shattered the mark by blasting 74 home runs in August of 2019.

12 Win Expectancy (WE) or Win Probability (WP) is the percentage chance of a team winning a game at a specific point of that game. It is calculated by comparing the current state of the game to similar situations in historical major-league games. Win Probability Added (WPA) captures the change in Win Expectancy from a plate appearance or baserunning event (i.e. stolen base, caught stealing/pickoff, or balk) and credits or debits the player accordingly. For instance, if a player hit a home run to increase his team’s Win Expectancy from 25 to 65 percent then that player would be assessed a WPA of 0.40. WPA is an excellent way of measuring a player’s impact on the outcome of a game. The play-by-play data required to compute WPA is available for all MLB games played from 1974 onwards. According to the Baseball Reference web site, data from 1925 to 1973 is incomplete, although most seasons have fewer than 20 missing games. No detailed play-by-play data exists prior to 1925.