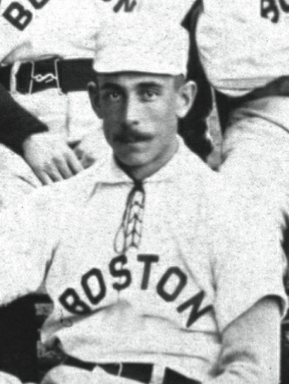 Fans arriving for the second portion of the Boston Beaneaters’ morning-afternoon Memorial Day twin bill with Cincinnati on May 30, 1894, had reason to anticipate a pleasant afternoon. It was warm and sunny, with a breeze blowing from the south and southwest.1 Beyond the pleasant conditions, their three-time defending National League champions had won four straight (including the morning game) and six of their last seven.

The crowd of 8,500 did indeed cheer their heroes on to a fifth straight victory. But beyond that, they witnesssed an unprecedented achievement. Bobby Lowe, the team’s popular second baseman, that afternoon became the first major-league player to hit four home runs in a game.

The crowd for the afternoon portion of the split-admission holiday twin bill was much larger than the 3,000 who had showed up for the morning game, won by Boston in a 13–10 slugfest. Kid Nichols, on his way to his fourth straight 30-victory season, started for the home team in the second game. But the Reds treated Nichols roughly, with Bug Holliday’s first-inning home run over the leftfield fence giving the visitors a 2–0 lead. Cincinnati hurler Elton “Icebox” Chamberlain, winless since the season’s second game, disposed of Lowe leading off the home half of the first, but a walk followed by hits by Tommy McCarthy and Billy Nash knotted the score at 2–2.

Boston took the lead in the bottom of the third on Lowe’s first home run, a line drive that cleared the left-field fence. The rest of the Beaneaters took it from there. Herman Long was hit by a pitch, Hugh Duffy sacrificed, McCarthy singled, and Nash walked, loading the bases. Tommy Tucker hit a fly to right field for the second out, but Jimmy Bannon, Jack Ryan, and Nichols followed with consecutive singles. Lowe, who had started the rally with his first home run, climaxed it with his second, again clearing the left field fence. The champions produced nine runs off Chamberlain that inning, taking an 11–2 lead.

The Reds attempted to get back into the game in the fifth when Dummy Hoy and Jack McCarthy singled, Arlie Latham connected for a double, and Holliday drove them in with his second home run. That made the score 11–6. But in the home half of the inning, Lowe clouted his third round-tripper, this one easily clearing the left-field fence. That tied the major-league record for home runs in a game, held by six players.

Already leading 12–6, Boston added five more runs in the sixth. Nash walked, Tucker was hit by a pitch, and Bannon singled. That brought up Lowe again, and he etched his name in the record books by hitting his fourth home run, the ball again sailing over the left-field fence. The crowd, aware that it was witnessing an exceptional exhibition, cheered Lowe wildly, some throwing coins at him. Teammates helped the player gather the loot, which was later found to total $160. Long followed that blast with one of his own.

Neither Lowe nor his teammates were through yet. In the seventh inning, bases on balls to Tucker and Bannon and hits by Nash, Ryan, and Lowe scored two more runs. Lowe’s fifth hit, a single, gave him 17 total bases for the game, another National League record and one that stood for more than 60 years until it was broken by Joe Adcock on July 31, 1954. In the eighth inning Boston scored its 20th and final run on a single by Long and a double by McCarthy.

Trailing 20–6, the Reds mounted a ninth-inning comeback against Nichols that produced five runs, including two more home runs, by Farmer Vaughn and Jimmy Canavan. The latter’s carried into the top of the center-field bleachers. Amazingly, for a game that saw 31 runs scored, 33 hits, nine bases on balls, and two hit batsmen, both Chamberlain and Nichols pitched a complete game. 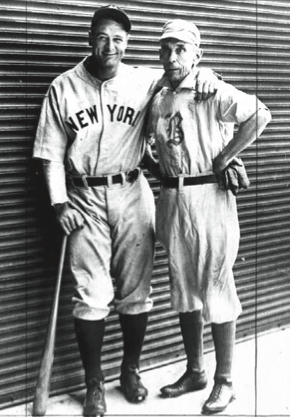 In recent years, some have questioned whether Lowe’s accomplishment was aided by the fact that the game was played at the Congress Street Grounds—a facility abandoned by the Boston Reds when the American Association ceased play in 1891—rather than the Beaneaters’ usual home, the South End Grounds. That park had burned in the Great Roxbury Fire just two weeks earlier. The fences at Congress Street Grounds were generally much closer than at South End Grounds.2 Those on the scene, however, saw it differently. “His home runs were on line drives far over the fence, and would be good for four bases on an open prairie,” wrote the Boston Globe’s Tim Murnane in his account of the game the following day.3

Two years after Lowe accomplished his batting feat, Philadelphia slugger Ed Delahanty duplicated it in Chicago. But not until Lou Gehrig in 1932 did any of the great 20th-century sluggers hit four home runs in one game. Just a few weeks after Gehrig did so, photographers in Detroit, where the Yankees were playing, arranged for the famed slugger to pose with a plain-looking, 66-year-old, 20-year Detroit city employee with whom the Yankee powerhouse had something in common. The city employee was Bobby Lowe. As reported in the newspapers of the time, Gehrig’s first question upon meeting the small, quiet man was, “Did you really hit four home runs in a single game?”4 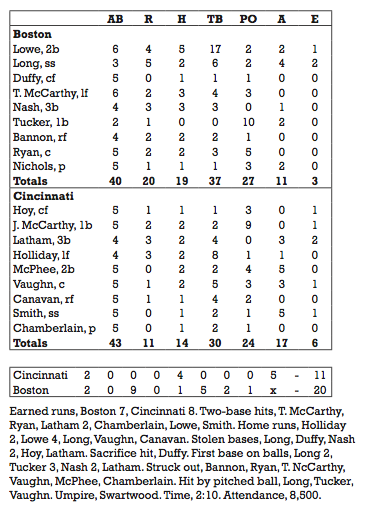 This essay was originally published in “Inventing Baseball: The 100 Greatest Games of the 19th Century” (2013), edited by Bill Felber. To read more stories from this book at the SABR Games Project, click here.