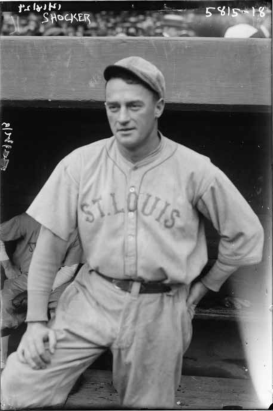 The American League regular season consisted of 618 games in 1922, none of which exceeded the 16-inning matchup between the St. Louis Browns and Detroit Tigers on May 30. Hosting the Tigers and already in the thick of a pennant race, the Browns had suffered a narrow 6-5 loss in the morning game of the Memorial Day doubleheader, and needed the split to keep pace with the New York Yankees.

Reports that day are conflicting, but a St. Louis newspaper reported that 22,000 attended the afternoon matchup.1 The Tigers were operating without the services of player-manager Ty Cobb, who was dealt an indefinite suspension that morning by American League President Ban Johnson for reportedly “trying to pulverize umpire Frank] Wilson’s feet”2 the day before as Cobb kept stepping on Wilson’s toes as he argued umpire decisions multiple times. Outfielder Harry Heilmann suffered the same fate for his role in the contentious debate, so neither was eligible for the Memorial Day contests.

The Browns sent Urban Shocker to the mound. The Browns ace was making his eighth start in the month of May; just three days earlier he had hurled 9⅓ innings in a 2-1 loss at the Chicago White Sox. Shocker, a spitball artist who won 187 games in his major-league career, already had nine wins under his belt in the first two months of the season.

Cobb’s Tigers countered with John “Red” Oldham, a Maryland-born southpaw starting his seventh game of the 1922 campaign. Oldham had saved the morning game for Detroit, inducing a game-ending groundout by future Hall of Famer and 1922 American League Most Valuable Player George Sisler to salvage a 6-5 win.

Sisler posted his first of four hits in game two when he drove a high fly over the head of Tigers left fielder Bobby Veach in the bottom of the first, but he had to settle for a long single when he missed the bag on the turn at first base. It was the most excitement recorded in the early innings, as Shocker and Oldham scattered a total of three hits in the opening three innings.

Frank Ellerbe, in his second season with the Browns after arriving in exchange for Earl Smith of the Washington Senators a year before, put St. Louis on the scoreboard in the bottom half of the fourth when he doubled to left-center to drive in Ken Williams. It was the second hit of the inning and only the fourth off Oldham, but it staked the always-tough Shocker to a lead.

With Cobb sidelined, coach Dan Howley took the reins of the Tigers, although his role was mostly that of messenger, with Cobb watching the game and calling the shots from a box just in the rear of the Tigers’ bench.3 (Howley, along with Browns trainer William Bierhalter, would exercise more influence in a game less than two months later when the two were pressed into action as umpires in a Browns-Tigers matchup in Detroit after the scheduled arbiters missed a train connection from Buffalo and did not arrive for the game.4)

Shocker marched on unscathed through the middle innings. A great stop by second baseman Marty McManus in back of second left two Tigers runners on base in the top of the seventh, and after eight innings Shocker had relinquished only five hits while striking out five.

The last inning of regulation told a different story. With the Tigers still trailing 1-0, Bob Jones started a Detroit rally with one out by beating out a roller to third. Ira Flagstead followed, but with a 1-and-1 count on him, Larry Woodall came on to pinch-hit and popped out to Sisler. Down to their last out, the Tigers finally put something together. Topper Rigney’s single sent Jones to third and then Johnny Bassler singled to right, driving in Jones with the equalizer. The game moved to extra frames when Shocker set down Oldham on three pitches.

With the first major-league night game still 13 years away,5 natural sunlight provided the only illumination of the day. With a 3:00 P.M. first pitch the game ambled toward dusk as no serious scoring threat occurred in the 10th or 11th inning, and Oldham was stranded at third in the top of the 12th. The next two innings showed no change in the score, and both starters had completed 14 innings.

With one out in the top of the 15th, Detroit leadoff hitter Fred Haney singled to left. Several Browns players surrounded umpire Brick Owens, voicing their displeasure over his rulings on balls and strikes to Haney, and it culminated with the ejection of Shocker and right fielder Jack Tobin. Harry Bullion of the Detroit Free Press described it this way: “Shocker became so enraged over what he thought was a strike on Haney in the fifteenth that he threw a bat Haney left at the plate after hitting safely with a crash against the grandstand, and was invited to stay out of the festivities. Tobin supported Shocker so vociferously that he, too, got the gate.”6

The next morning Ban Johnson informed manager Lee Fohl that Tobin was suspended indefinitely. He would sit for five games before returning to the lineup on June 6.  Johnson’s telegram made no mention of Shocker.7

With Shocker done for the day, Fohl substituted former University of Missouri left-hander Hubert “Hub” Pruett, making only the seventh appearance of his major-league career. Pruett struck out George Cutshaw and Danny Clark, the Tigers’ second- and third-place hitters, and the threat was averted.

With one out in the bottom of the 15th, Ken Williams of the Browns started a rally with a double down the right-field line. Oldham, who had allowed just one run in 14⅓ innings, was replaced by Ole Olsen, a rookie whose major-league career would last just two seasons. Of the pitching change, the Free Press said: “Instructions were given to Howley by Manager Cobb, who was hidden from view near the rear entrance to the dugout, to insert Olson sic], a right hander, against Ellerbe, who bats the same way.”8 Olsen was successful in closing out the inning, striking out Ellerbe and, after intentionally walking McManus, retiring the opposing pitcher, Pruett, on a liner to end the frame.

The fateful 16th started with Pruett, who fanned two in relief of Shocker the inning before, continuing his dominance by striking out Veach and Jones before Bert Cole, now playing center field in Flagstead’s original spot in the batting order, grounded to third baseman Ellerbe for the third out. The top of the Browns’ lineup awaited Olsen.

When Tobin was granted his departure in the 15th inning, Cedric Durst quietly replaced him in right field. A left-handed hitter, Durst was making his major-league debut. His leadoff infield single was one of only 12 at-bats during the season.

Wally Gerber sacrificed Durst to second. After intentionally walking Sisler, Olson got Baby Doll Jacobsen, 0-for-8 in the game, to fly out deep to center field. Next came Tharon Patrick “Pat” Collins. The seldom-used backstop had only seven previous plate appearances in 1922, but three of them resulted in safeties. He continued to make the most of his opportunities, driving an Olsen offering to center field and scoring Durst with the game-winner.

The victory left the Browns just 2½ games behind the Yankees in a pennant chase that wasn’t decided until just two days remained in the season, with the Browns ultimately finishing one game off the pace.

Shocker and Oldham both toiled for 14⅓ innings, neither of them posting a decision. Oldham allowed one run and 15 hits and struck out four. Shocker was a touch better, allowing one run and11 hits while striking out eight.

George Sisler posted four hits in six official at-bats, and walked twice to boost his average to .426, on his way to a staggering final mark of .420.

And for Cedric Durst, his major-league debut featured the most efficient stat line of all.

One at-bat. One hit. One run scored.