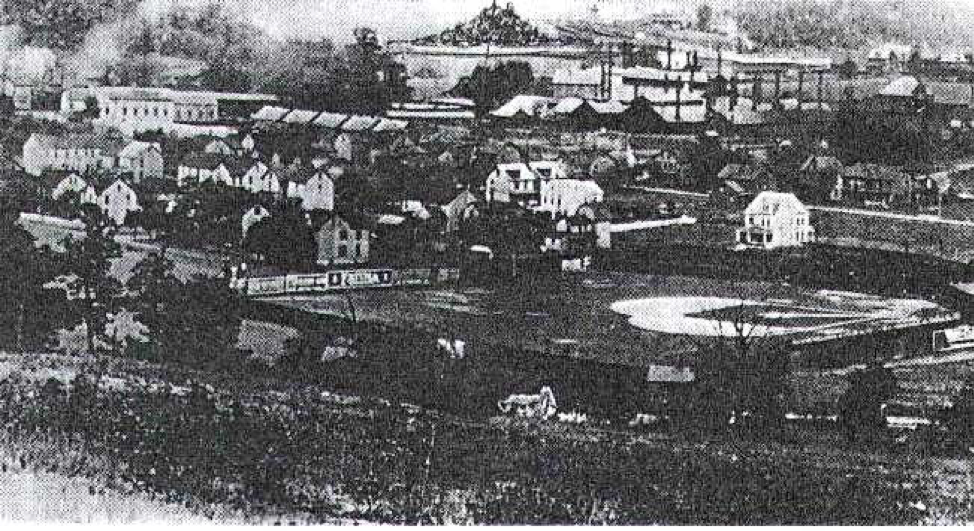 The Altoona Mountain Citys were a short-lived major-league team that played in the short-lived Union Association. The club’s lone season lasted 25 games and ended with a 5-3 loss to the Baltimore Monumentals on May 31, 1884.

The Central Pennsylvania railroad city of Altoona was not originally in the Union Association’s plans. League President Henry Lucas spent months lining up clubs in Baltimore, Boston, Chicago, Cincinnati, Philadelphia, St. Louis, and Washington. For travel convenience, Lucas desperately wanted to add a franchise in Pittsburgh, midway between the Eastern and the Western teams.

Lucas’s Pittsburgh pursuit fell through, but a minor-league club 100 miles away in Altoona was seeking a new league and offered similar geographic benefits. Altoona heard about Lucas’s interest, applied for admission into the Union Association on February 11, 1884, and received a telegram nine days later confirming its acceptance.

The exact 1884 population of Altoona is unclear, but it was undoubtedly much smaller than other major-league cities at the time. The 1880 US Census listed Altoona’s population as 19,710, while all of the other original Union Association cities had populations of more than 175,000 on that same census. A city like Altoona hosting clubs from major markets makes it easy to understand why one historian called the Altoona Mountain Citys “the most unlikely major league team in baseball history.”1

Like many nineteenth-century clubs, Altoona’s Union Association entry had several names. Altoona is set at the base of the Allegheny Mountains and is nicknamed the Mountain City, and Altoona Mountain Citys remains the most common name associated with the 1884 club. Other articles called them the Altoona Unions, since they played in the Union Association.

A bumpy road trip began the Altoona Mountain Citys’ on-field existence. The club started the season with a three-game series in Cincinnati and lost all three games. From there, it was four losses in four tries at St. Louis. The Mountain Citys arrived in Altoona for their home opener at Columbia Park with an 0-7 record.

Columbia Park was built in 1884 and was surrounded by streets. It had a narrow grandstand and its home clubhouse was behind the center-field wall. It was also known as Fourth Avenue Grounds or Waverly Field.3

Altoona’s first home game, on April 30, drew a strong crowd of more than 2,000 people, who saw the Mountain Citys get pounded by St. Louis, 15-2. St. Louis took the next three games in Altoona too, dropping the Mountain Citys’ record to 0-11. Altoona beat talented Boston hurler Tommy Bond on May 10 to earn the first win in team history and move its record to 1-11.

The Mountain Citys lost more games than they won in the succeeding weeks but had even bigger concerns to deal with: Financial problems were mounting. “Attendance dwindled to less than 1,000 a game, and sometimes as low as 200 — not even enough to pay the players’ salaries. By the end of May of the team’s inaugural professional season, a number of the players had jumped to other teams.”4

On May 27 Altoona began what turned out to be its final series with a 3-2 win over Baltimore in 13 innings, the longest game in Union Association history and “the finest ever played in the county.”5 The dramatic victory in front of 300 spectators sparked a boost of optimism regarding the team’s future. The Altoona Times’s game summary opened with “(a) change for the better has taken place in the fortunes of the Altoona base ball club.”6 The optimism didn’t last long.

On the same day the Altoona Times published that hopeful game story, the Kansas City Times reported rumblings that its city was trying to wiggle into the Union Association. “An effort is being made by a prominent sporting man of this city to organize a professional base ball club, provided admission can be obtained to the Union association [sic].”7

On May 29 league President Lucas arrived in Altoona. At first, the press wasn’t skeptical about why he was in town, writing that Lucas “witnessed yesterday’s game from the grand stand. If he had opinions about the playing he kept them to himself like the polite gentleman he is.”8

Lucas was still in Altoona on May 30 and coverage turned gloomy in the next day’s Altoona Times: “President Lucas, of St. Louis, and President of the Union Association, still remains in the city. It is rumored he wants to locate the Altoona club in Kansas City.”9

When the Mountain Citys reported for their home game against Baltimore on May 31, nothing had been officially announced regarding the club’s future. About 1,000 fans came out to Columbia Park that day, not realizing they would witness the final game in Altoona Mountain Citys history.

Henry Oberbeck, normally a position player, was the starting pitcher for Baltimore, making his first major-league start as a hurler. Jim Brown and his 1-8 record got the start for Altoona. The game began under sunny skies with temperatures in the 60s.10

After a scoreless first inning, Baltimore scored three runs in the top of the second on “good hitting aided by errors.”11 Altoona brought in a run in the fifth and two more in the sixth to tie the game, 3-3. Baltimore was batting in the eighth with two outs, a runner on base, and the score still tied when Altoona left fielder George Daisy dropped an easy fly ball. A two-run hit by Baltimore immediately after Daisy’s error put the Monumentals ahead, 5-3.

The fact that Daisy was even on the field shows how dysfunctional the Mountain Citys had become. Daisy was a local dance instructor who played minor-league ball in Altoona the year before.12 He was summoned to fill in that day when three Mountain Citys refused to play because they hadn’t been paid.13 Daisy arrived immediately before the game, went 0-for-4, and made that crucial error. It was the only major-league game of his career.

Neither side scored in the ninth and Baltimore won, 5-3. The game took two hours. The Mountain Citys officially disbanded after the game. “Lucas, knowing that the Altoona association could not possibly get through the season on such poor business as they have been playing to, came on to advise its withdrawal,” the Altoona Times commented.14

Kansas City wasn’t an upgrade from Altoona on the field — the Cowboys went 16-63 — but they were an upgrade at the gate. Big crowds filled Kansas City’s Athletic Park throughout the summer of 1884 and Kansas City joined St. Louis and Washington as the only three Union Association teams to turn a profit.16

Charlie Berry, Joe Connors, Clarence Cross, and Taylor Shafer were the only Altoona players transferred to Kansas City’s roster. The Mountain Citys’ best player, 25-year-old Germany Smith, joined the National League’s Cleveland Blues and went on to play in the majors until 1898 and rack up 1,597 career hits.

“The truth is Altoona hasn’t got the population to support such an organization,” the Altoona Times eulogized a few days after the Mountain Citys’ collapse. “(T)he Altoona team was, from the start, a disjointed combination, lacking confidence in themselves and in the management.”17

The Union Association itself folded after the 1884 season. Altoona hosted minor-league teams off and on from 1886 to 1912. The Pittsburgh Pirates’ Double-A affiliate, the Altoona Curve, has called the Mountain City home since 1999. Some Curve fans may not realize that their city was the home of a fleeting major-league team that faded away on May 31, 1884.

In addition to the sources cited in the Notes, the author used Retrosheet.org.