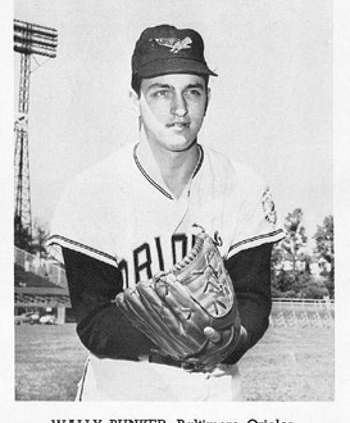 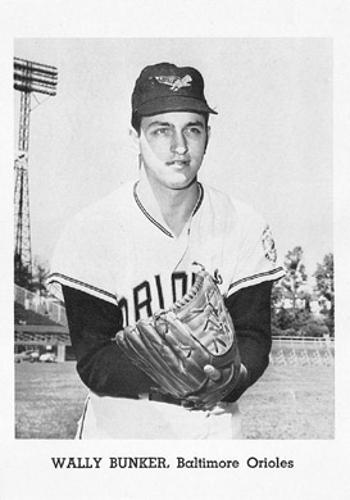 The Baltimore Orioles were beginning their 11th season since relocating from St. Louis before the 1954 season. Because the Orioles inherited the Browns players, maturing into a competitive club after so many down years in St. Louis had been a slow process. This was not going to be an overnight success story. Not by any means.

The Orioles finished in the second division of the American League from 1954 to 1959 but a surprising second-place finish in 1960 and third place in 1961 indicated that the tide was changing in the Charm City.

The Orioles ended the 1963 season in fourth place with a 86-76 record in the AL. Brooks Robinson was already winning Gold Gloves at third base and a young Boog Powell was providing the power. The pitching corps was led by veterans Milt Pappas, Steve Barber, and an aging Robin Roberts. Orioles fans were also getting their first look at a 20-year-old southpaw named Dave McNally.

Another young pitcher the Orioles were keeping their eye on was Wally Bunker. The right-hander had posted a 16-2 record his last two years at Capuchino High School in San Bruno, California. Major-league scouts flocked to San Bruno, 10 miles south of San Francisco.

Bunker signed with Baltimore after his father negotiated a $75,000 bonus deal. Bunker reported to Stockton of the Class-A California League and posted a 10-1 record with a 2.55 ERA for the Ports. His fine season earned him a ticket to Baltimore, or Detroit in this case, where he started the Orioles’ final game of the 1963 season at Tiger Stadium. Bunker had a rough debut, surrendering six runs in four innings as Detroit prevailed, 7-3.

Hank Bauer succeeded Billy Hitchcock as manager in 1964. The Orioles brass had an important decision to make. Since Bunker was a “bonus baby,” he was required to remain on Baltimore’s big-league roster for two years. If the Orioles wanted to send him to the minors, they risked another team picking him up.

Bunker made his first 1964 start against Washington on May 5. The Orioles were 8-7 so far; they had just dropped two of three games to Cleveland.

The Senators sent sending Jim Hannan to the hill. He was also making his first start of the season after appearing in five games as a reliever.

Before the game, the Orioles players, coaches, and some front office personnel visited various hospitals in the Baltimore area. Three days before, on May 2, a child had been killed and 46 injured in an incident with an upper-deck moving stairway at Memorial Stadium. Children were stomped on and crushed as the moving stairway heaped them into piles at the upper-deck platform and on the west-side moving stairway steps. A portable gate, allowing only about one child at a time to pass, stopped children from going to the upper deck.1

Many of the children were released after hospital treatment. One girl, Annette Costantini, 14, was was pronounced dead on arrival at St. Joseph Hospital. The Orioles contingent broke into three groups to visit the children who were still being treated.2

As the game progressed, the 19-year-old Bunker was showing no signs that he was the least bit overwhelmed or intimidated by the big-league hitters. He retired the first seven Senators he faced before walking John Kennedy in the third inning. After Bunker struck out Hannan for the second out, Kennedy was erased for the third out when he was caught stealing, catcher John Orsino to shortstop Luis Aparicio.

In the top of the fourth inning, the Senators’ Ed Brinkman led off with a walk. Don Blasingame lined out to short. Chuck Hinton bounced a single through the infield and into center field. Bunker walked Jim King to load the bases. Moose Skowron stepped into the batter’s box and rapped a grounder toward Robinson at third. Robinson threw to second to get the force on King, but Skowron beat the relay. Brinkman scored and the Senators led 1-0. “That’s the kind of call you like to have a reprieve on,” said first-base umpire Cal Drummond. “I started to call Skowron out, then I decided he had beaten (Jerry) Adair’s throw and it wasn’t a double play. It was very close but Skowron was safe.”3

Baltimore couldn’t get anything going against Hannan. Aparicio led off the bottom of the fourth inning with a double to center field. But he tried to steal third and was gunned down by Washington catcher Ken Retzer.

Hannan retired nine consecutive Orioles until Robinson singled to left with one down in the seventh. Norm Siebern followed with his second home run of the year. The baseball just cleared the right-field foul pole. The shot put the O’s in front, 2-1. “It was a slider,” said Siebern. “I knew it was going far enough as soon as I hit it. The only question was whether it would stay fair. It did – by 20 or 30 feet.”4

With Baltimore in front, Bunker bore down and retired the next six Senators, giving the Orioles a 2-1 win. He set down 16 in a row after the Senators scored their lone run in the fourth inning. He threw 99 pitches, mostly fastballs and sinkers. “This was my greatest game, no doubt about it,” said Bunker. “I threw a no-hitter when I was in the sixth grade and nothing better than a one-hitter in high school.”5

“Those 99 pitches seemed like 199,” said Bauer. “Those close games, oh my. That ninth inning is the longest and that last batter is the longest. I was worried about the game, not any one-hitter. We’re only leading 2-1. I got Stu (Miller) warming up in the eighth and ninth and (Wes) Stock was out there in the fourth when they filled those bases.”6

The Orioles finished the 1964 season in third place with a 97-65 record. Baltimore trailed first- place New York by only two games, and second-place Chicago by one. They had a winning record against all of their AL rivals except for an 8-10 record against Cleveland.

Two years later, the Orioles won the AL pennant and swept the Dodgers in the World Series. It was the first world championship in franchise history, St. Louis or Baltimore. Bunker was the starting pitcher in Game Three. He pitched a six-hitter as the Orioles won, 1-0.