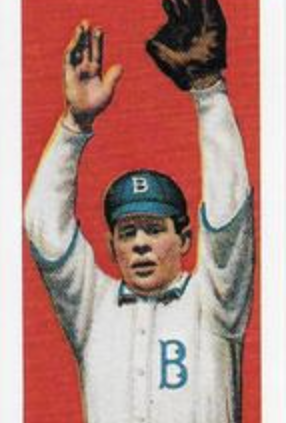 The two bottom-dwellers of the fledgling Federal League took to Gordon and Koppel Field for a midweek clash. Combined, Pittsburgh (3-11) and Kansas City (7-10) had 10 wins, the same number the league-leading Baltimore Terrapins owned (10-4) and one fewer than the second-place St. Louis Terriers (11-6). The visiting Rebels, who had replaced their manager, Doc Gessler1 after 11 games, were trying to salvage a win against the Packers in the final game of a three-game series, and, according to the Pittsburgh Post-Gazette, “the Rebels had their slugging clothes on today.”2

Ben Harris started for the Packers. Harris was a rookie, making just the fourth appearance of his career (all starts). He pitched in 31 games for the Packers in 1914, making 14 starts. It was virtually his only season at the big-league level. He did appear in one game for KC in 1915, pitching two scoreless innings against the Baltimore Terrapins. Fred “Mysterious” Walker took to the mound for the visitors. Walker was a 30-year-old right-hander who had bounced around, with two cups of coffee (playing one game for Cincinnati in 1910 and one for Cleveland in 1912), before signing on with Brooklyn in 1913. After only 11 appearances with the Superbas, Walker jumped to the Federal League. His career ended when the league closed in 1915. In his first start of 1914, on April 30, Walker survived just two-thirds of an inning, allowing five runs on only two hits, but five walks. Coming into this contest, his earned-run average was 10.38.

Just over 300 fans came to 12,000-capacity Koppel Field to witness the contest, despite the fact that Gordon and Koppel Field supposedly had a capacity of 12,000.3 Kansas City started the scoring, plating a runner in the bottom of the first inning. With one out, Grover Gilmore walked and was forced at second by Duke Kenworthy’s grounder to second. Kenworthy stole second and scored when player-manager George Stovall singled into center field.

Pittsburgh fought back in the top of the second. Ed Lennox led off by stroking a double into the right-center gap. Hugh Bradley bunted Lennox to third and Tex McDonald rolled a grounder to shortstop Walter Tappan, who made an error; McDonald was safe and Lennox scored. Jack Lewis “rapped to right for a single.”4 McDonald raced for third, sliding safely into the bag, and Lewis made a heads-up play by advancing to second on the throw. Claude Berry then singled into center field, plating the two runners.

An inning later Pittsburgh put another three-spot on the scoreboard. Acting player-manager Rebel Oakes “paraded”5(drew a walk) and Lennox deposited the ball over the left-field fence for his fourth home run of the season. Dwight Stonecame on in relief of Harris, and Bradley greeted him with a single. Stone plunked McDonald on the leg. Lewis contributed to just the first out of the inning by forcing McDonald at second. Berry then laid down a perfect squeeze bunt, scoring Bradley and beating the throw to first. Pittsburgh led, 6-1.

Leading off the fifth, Lennox reached safely again, this time banging a single into left field. Bradley followed with a double. An out later, Lewis grounded a ball to short for the second out and Lennox scored (Bradley advanced to third). Berry knocked his third straight single for another RBI.

Walker sailed through the first four innings. But in the bottom of the fifth, he “sprained his side and had to retire in favor of Willie Adams.”6 Singles by Ted Easterly, Chet Chadbourne, and Gilmore resulted in Kansas City’s second run of the game. Pittsburgh got the run right back in the sixth. Ed Holly stroked a one-out single and advanced on a passed ball. Oakes drew his second walk of the game. He and Holly then attempted a double steal, and Holly was tagged out at third. (Oakes moved up to second.) Lennox sailed a balled to the fence in right for a run-scoring triple. In four at-bats, he had become the first (and only) Federal League player to hit for the cycle.

The ninth inning brought a few more runs. In the top half, Lennox “got another homer over the left field fence.”7 He was 5-for-5 in the game, and he had amassed 14 total bases. Kenworthy banged a two-run homer in the bottom half to finish the scoring. The final score was Pittsburgh 10, Kansas City 4.

Kansas City put together 13 hits but only four runners managed to make it around the bases. Chadbourne led the team with three hits, but as the Cincinnati Enquirer reported, “The locals could not bunch their bingles.”8 Harris lasted only two innings, but in that short time he allowed three earned runs.

Pittsburgh’s third baseman Lennox scored four runs, as many as the Packers’ entire offense. He also drove in four runs. Berry knocked in either four or five runs.9 The Pittsburgh Press reported that “the hitting of Lennox was the best that has been pulled off in the league this season.”10 He and his teammates exploded for 15 hits. Every position player garnered at least one safety except for Oakes, who walked twice and scored two runs in the team victory, driven in both times by Lennox.

Mysterious Walker pitched well enough for the victory, but his four-inning stint did not make him eligible for the win. Adams thus earned his first win of the season.

With this game, Lennox raised his average from .256 to .333, and he extended a hitting streak to five games. (He would hit safely in the next six games as well.) This was his only five-hit game of the season, and it was the fourth consecutive game in which the righty hit a home run. He had driven in 14 runs in a five-game span.

Lennox played just six games for the 1906 Philadelphia Athletics. The rest of 1906 was split between the Rochester Bronchos (Eastern League) and the Lancaster Red Roses (Tri-State League). The Brooklyn Superbas signed him in 1909, and he played two seasons in the National League, leading the league in fielding percentage in 1909. After a year with the Louisville Colonels (American Association), the Chicago Cubs gave Lennox a contract in 1912, penciling him into 27 games, but he found himself on both the Louisville and Kansas City Blues (American Association) rosters to finish out the season. In 1913 he signed with the Montreal Royals (International League). When the Federal League formed, Lennox, who had not played in the majors since 1912 with the Cubs, signed with the Rebels, playing 124 games in 1914 and 55 in 1915, when he played his final game on October 3, 1915. He batted .312 in 1914, belting 11 home runs and driving in 84 runs.

As soon as the contest ended, the Rebels left for St. Louis, to play a three-game series against the Terriers. Many sources reported that “Pitcher Eddie Henderson sprang a surprise on his teammates this afternoon when he was wedded to Miss Grace Huber.”11 Henderson was a rookie reliever who appeared in six games for the Rebels in 1914 before being traded to Indianapolis. He pitched only twice for the Hoosiers, and his major-league career was over. His bride is no relation to the author.

1 In his SABR biography of Gessler, Bill Nowlin notes an Indiana (Pennsylvania) Evening Gazette obituary that said Gessler had lost the sight of one eye, in effect forcing him to quit the game.

3 “Lennox the Slugging Kid,” Cincinnati Enquirer, May 7, 1914: 6. According to projectballpark.org/history/fl/gordon.html, the capacity was 12,000 fans.

9 Retrosheet.org and Baseball-Reference.com each credit Berry with five runs batted in; the play-by-play in the Pittsburgh Daily Post reveals that Berry drove in four runs — two in the second, one in the third, and one in the fifth.