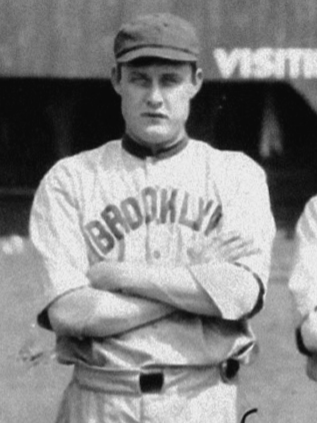 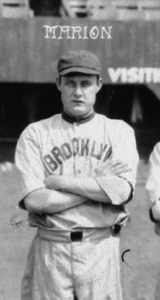 ears told him to move.

As sound waves from the crack of the bat pulsed through the air, the St. Louis Terriers’ right fielder spun quickly and dashed toward the Washington Park brick wall.

As the ball soared, Evans had rounded third and was running toward the plate, looking to break the 2-2 tie in the top of the sixth inning. Myers was about 10 feet behind and approaching third, also thinking about home.1

“There did not seem one chance in a thousand for the little right fielder to get it, but he went tearing out after it,” the St. Louis Post-Dispatch wrote about Tobin’s pursuit of the ball.2

But as the ball fell near the right-field fence, Tobin whirled, thrust his glove in the Brooklyn air, and nabbed the ball to retire Halt. The catch left Evans and Myers in limbo and with no time to return to their bases.3

St. Louis second baseman Al Bridwell sprinted out toward right, yelling for Tobin to relay the ball to him. Tobin did, and Bridwell fired to shortstop Ernie Johnson, who tagged second base for out number two and then threw to Babe Borton at first for the triple play.

The New York Times reported that Tobin made a long throw to Johnson at short, who tossed to Bridwell, who relayed the ball to Borton.

“The play was unusual because there was not the slightest reason to criticise the base-running of Evans and Myers,” the Brooklyn Daily Eagle reported the next day. “Tobin’s catch was truly wonderful, and it will probably be many a day before he makes another like it.”

The Terriers’ triple play — a first in the 1915 Federal League season4 — was the crown jewel among the game’s many defensive gems.

“The average fan considers himself fortunate when he witnesses one thrilling catch or stop,” the Eagle said, “but there was hardly an inning in which neither side did not produce an exceptional defensive play.”

In the bottom of fourth, Brooklyn catcher Grover Land hit a ball deep toward the left-field bleachers. It looked destined for a triple, the Eagle reported. However, St. Louis outfielder Ward Miller sprinted to the fence and made a spectacular catch with his fingertips as the ball was about to fly over his head.

In the next inning, the Terriers’ Delos Drake displayed defensive dexterity when he sprinted back to catch a blast from Jim Delahanty just before the ball hit the fence. With a runner on first and only one out, Drake’s catch saved a run and preserved the tie.

As good as the defense was, it was pitching, particularly on the Brooklyn side, that kept most batters in check.

Tip-Tops (or Brookfeds, as they were often called) player-manager Lee Magee, speaking about the injured and departed Jim Bluejacket a few days earlier in the Eagle, promised the team’s fans he had a pitcher ready to step in.

“I’ve got another pitcher now that will make ’em all look sick,” Magee said on May 3, moments after a game in which he broke the pinky finger on his right hand. “He’s ready to start any day. His name is Don Marion. Just watch him.”5

Magee may have thought of turning away early in Marion’s start against St. Louis. The 6-1 right-hander from Bowling Green, Ohio, walked leadoff hitter Al Bridwell and couldn’t field Tobin’s sacrifice bunt and throw to first in time to get the out.

Already, Magee’s man was in trouble. He found more of it two batters later when Babe Borton singled to right on a 3-and-2 count. Bridwell  scored, Tobin rested on second. Up next, Ward Miller singled to center, scoring Tobin for a quick 2-0 Terriers lead.

Marion must not have been passing the eye test. Magee sent reliever Bill Upham to the bullpen to warm up.6

The Tip-Tops’ starting hurler, however, settled down.

Grover Hartley next came to the plate and blasted a liner to center. Brooklyn’s Claude Cooper ran toward the ball, grabbed it near his shoestrings but let it fall to the grass. Borton held on second, thinking Cooper would make the catch.

When Hartley saw the ball squirt away, he ran for third. Cooper gained his composure, gripped the ball and fired a dart to third, where Halt made an easy tag for the second out.

Miller ran to second on the throw.

Looking to capture another run, the Terriers attempted a hit and run with Bobby Vaughn at the plate, but he swung and missed, and Grover nailed Miller sprinting to third to end further damage from the visitors.

The Brookfeds rumbled back in the bottom of the second.

The lefty Watson began the half-inning for St. Louis by walking Myers and giving up a single to Holt. Ed Gagnier next hit a sharp grounder between first and second. The ball looked destined for the outfield. However, Bridwell made a spectacular play by knocking down the ball down with one hand. He quickly jumped to his feet and zipped the ball to first for the out.7

Myers and Holt advanced to second and third, respectively.

Land kept Bridwell busy by grounding out to second.

Now, with two outs, it looked as though Watson could escape the inning without allowing Brooklyn to score. That idea quickly dissipated when Marion, the Brooklyn pitcher, drew a walk to load the bases.

George Anderson made Watson pay. The Tip-Tops left fielder delivered a scratch hit down the first-base line that scored Myers and Holt, tying the contest at 2-2.

That’s the way it happened according to the New York Times.

The Eagle, however, provided its readers with a slightly different account. The newspaper reported that Myers took third on Holt’s single.

“This is where Bridwell pulled a bone,” the Eagle claimed. “He intercepted Tobin’s throw to Vaughn, which would have killed Hap. The Eagle reported Hap scored on Gagnier’s out.

If that were the case, the score would have been 2-1 in favor of St. Louis. Further, the Eagle wrote that Brooklyn got its second run of the inning when Halt scored on Anderson’s hit to first.

Despite the reporting discrepancies, the teams were knotted at 2-2 at the end of two innings. And along with dazzling defensive plays came solid pitching, particularly from Marion, just as Magee had promised.

The Brooklyn hurler turned in a tip-top performance, allowing only 24 St. Louis batters to take turns at the plate after the rocky first inning. Out of those 24, only one Terrier managed to hit the ball to the outfield. Marion gave up a walk, but erased the runner on a double play he started.8

Watson also pitched a solid game for St. Louis, allowing only five hits and three runs. The third, however, turned out to be Brooklyn’s game-winner in the eighth. Much of the blame fell, not on Watson, but on Terriers catcher Grover Hartley’s leaky mitt.

With one out, and Cooper standing on second, Hartley let one of Watson’s pitches slip through his glove. Cooper darted to third.

“Hap Myers then stung the ball along the third base line and Cooper romped home” with the winning run, the New York Times reported.

Marion shut down the visitors in the top of the ninth for a 3-2 Brooklyn victory.

His and Watson’s quick and efficient mound work contributed to the game finishing in a tidy 1 hour and 21 minutes, a Federal League best for the year.9

Brooklyn improved to 11-9 for the young season. The Tip-Tops were playing the game, and several before, without star center fielder Benny Kauff, who had been suspended by Federal League President James A. Gilmore for trying to jump ship and sign with the National League’s New York Giants in April.10

Kauff’s drama, Bluejacket’s injury, and Magee’s own broken finger — after X-rays, a doctor urged him not play  — kept many of the regulars out of the lineup. It was enough to send the player-manager on a scouting trip to Columbia University to look for more players.

The Eagle, however, with Marion’s recent success, thought it wise for Magee to focus on what he had already on the field.

“It appears,” the paper, stated, “that the best dope would be to employ a scout hereafter and keep Magee somewhere around the ball yard.”

The author used Baseball-Reference.com for box scores and play-by-play information.

1 “Marion Breaks Into the Limelight with Fine Pitching Exhibition,” Brooklyn Daily Eagle, May 7, 1915: 24.

8 “Marion Breaks Into the Limelight with Fine Pitching Exhibition.”

11 “Marion Breaks Into the Limelight with Fine Pitching Exhibition.”