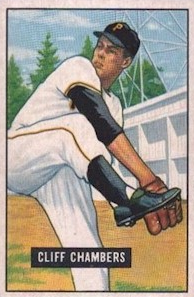 The 1951 National League season is usually remembered most for the legendary “Shot Heard ’Round the World” capping the New York Giants’ September pursuit that plucked the pennant from the Brooklyn Dodgers. But a May game in Boston matching the Braves, then in pennant contention, with the visiting Pittsburgh Pirates featured an odd pitching performance that spiced the Senior Circuit’s early season, illustrating just how unpredictable baseball can be.

May 6 dawned with the Braves and Cardinals in a virtual first-place tie. The second-division Pirates were in town for the day only; a typical 1950s Sunday doubleheader was on the bill. Warren Spahn had pleased the 15,492 scattered around Braves Field with one of his 63 career shutouts in the opener, a 6-0 romp, as third baseman Bob Elliott, a former Pirate, went four-for-four and drove in three runs. Pittsburgh ace Murry Dickson had started the first game, and with Pirate manager Billy Meyer remaining in New York while his team made the one-day trip, his stand-in, coach Bill Posedel, tabbed Cliff Chambers for the second game. Chambers, a 29-year-old lefty in his fourth National League season, had been beset with the flu for four days but was coming off a complete-game win in Brooklyn five days earlier. He remembered years later: “I went in and laid down on the rubbing table the first game ‘cause I didn’t feel good. Bill Posedel told me ‘We don’t have anybody to pitch. Can you give us four or five good innings?’”1

Braves skipper Billy Southworth’s choice was George Estock, 26, a rookie right-hander making what would turn out to be his only start in a one-year major league career. And with a lefty going for Pittsburgh, Southworth stacked his batting order with right-handed hitters—only bespectacled first baseman Earl Torgeson, slotted third, swung from the left side.

Pittsburgh touched up Estock for a run in the first. George “Catfish” Metkovitch, hitting second, doubled and scored as Gus Bell followed with a single. Bell stole second with cleanup hitter Ralph Kiner at the plate, but Estock got Kiner to fly out and exited the inning without further damage. Chambers walked second baseman Roy Hartsfield, leading off for the Braves, but was otherwise perfect in the first.

Ed Fitz Gerald nicked Estock for a two-out single in the second and Chambers walked Buddy Kerr in the third and Torgeson in the fourth, but the pitchers matched goose eggs until the top of the sixth, with Chambers aiding his own cause by throwing out Luis Olmo on a tough high bouncer in the fifth. Bucco shortstop George Strickland chipped in on the next play, retiring the light-hitting Kerr on a sharp ground ball. In the sixth, a double and two walks left Estock facing a bases-loaded situation with two outs. Monty Basgall, the No. 7 hitter, coaxed yet another walk to plate the second Pittsburgh run before Estock got a force out at third off Fitz Gerald’s bat.

With the Braves still hitless, Chambers walked Estock to lead off the Boston sixth, then wild-pitched him to second. Batting next, Hartsfield slapped a bunt that Chambers handled with a leaping stab and timely throw to first. The out was the first of the inning and moved Estock to third. Chambers got Sam Jethroe to roll to short while Estock held, then walked Torgeson again. The hot hand, Elliott, known around the NL as a Pirate killer since he left Pittsburgh, hit next and after fouling off five pitches, launched a shot to right-center field that Bell was able to run down on the warning track. Pirate beat writer and Sporting News stringer Les Biederman opined that only the strong east winds off the Charles River that often affected Braves Field made the ball catchable.2

Estock had plugged along, scattering walks and singles, until the Pirates bunched a walk to Wally Westlake, an infield single by Basgall, and Chambers’ single to add a third run in the eighth. The lefty needed the insurance, as he walked two more in the bottom of the inning to face the tying run with two outs and the dangerous Elliott batting. Chambers prevailed more easily this time, getting a popup to catcher Fitz Gerald.

“The first I knew about a no-hitter was in the fifth inning when the scoreboard showed Boston didn’t have a hit. I didn’t give it any more thought until the ninth,” Chambers told reporters after the game.3 Fitz Gerald had been calling the pitches all day, but as Chambers went to the mound for the ninth inning with a no-hitter on the line, he told his catcher he’d make his own pitch selections.4 He’d gotten the cleanup hitter to end the eighth; now he faced Boston’s 5-6-7 hitters, Sid Gordon, Walker Cooper, and Olmo. Gordon grounded to short, but Chambers was especially wary of the hard-nosed Cooper, an eight-time All-Star in his 18 NL seasons. “Whenever I pitch against him, Cooper generally hits one they can never find. I tried to pitch very carefully to him when he came up in the ninth,” Chambers explained.5 Cooper got a fastball on the first pitch and lifted a fly to moderately deep center where Metkovitch made the catch for the second out.

As Olmo neared the plate, third baseman Bob Dillinger jokingly yelled to Chambers, “You’re lousy if you don’t retire this guy.”6 Just as eager as Cooper had been, Olmo swung at the first pitch, another fastball, with the same result—a fly to Metkovitch. Chambers had completed the first Pittsburgh no-hitter in 44 seasons.7 Fitz Gerald summed it up: “Sure he was wild, but when he needed a little extra on his fastball, boy, he had it.”8

Chambers’ eight-walk, wild-pitch, no-hitter has earned him a spot (No. 8) on at least one current list of the ten most imperfect hitless games in baseball history.9 It also carries the distinction of being the only no-hitter by a visiting pitcher in the 38-year history of Braves Field, and the last one in “the house that Ruth quit.” 10

Then and still an avid Boston Braves fan, I was present with my dad at this early May doubleheader. The abrupt shift to Milwaukee in 1953 still pains me. My most vivid memory of this second game was how the buzz in the stands morphed into mild applause for Cliff Chambers until, near game’s end, loud cheers erupted as his date with destiny grew ever closer. For this youngster embarking on a lifelong love affair with our national pastime, such responses were seen as treason. Of course, now I can appreciate how the thrill of eye-witnessing a potential once-in-a-lifetime event might trump fan loyalty. Then again …..! And I’ll always wonder what impact this game might have had on Billy Southworth’s dismissal as manager after the June 19 game that season. After Spahn won the first game on May 6, the Braves stood 13-8 (.619). They were 28-31 when Southworth was replaced by Tommy Holmes, so they went 15-23 (.394) between the no-hitter and the firing. Over those games the offense was anemic and scored three or fewer runs in nearly half of them. By the end of the 1951 season only the Giants and Dodgers had outscored the Braves in the National League, and they batted .262, also third in the NL. Off-field issues (team dissension ignited by the signing of seldom-used bonus baby Johnny Antonelli, the ill-fated December 1949 trade of Eddie Stanky and Alvin Dark to the Giants for Gordon, Willard Marshall, Kerr, and Red Webb, and charges that Southworth was too paternalistic with his players) have usually been cited as primary causes for the firing. Nonetheless, the sharp decline in production at the plate that began with Chambers’ no-hitter may have been the final nail in Southworth’s coffin.

Kelley, Brent. The Pastime in Turbulence: Interviews with Baseball Players of the 1940s. Jefferson, NC: McFarland, 2001. 280

10 Sullivan, “When It Was Braves Field,” 10. Babe Ruth played his final season at age 40 with the Braves in 1935 after being released by the Yankees. He hit an Opening-Day home run at Braves Field, but retired in early June. Zerby, “May 25, 1935.” Ruth played 11 games at Braves Field that season, the last one on May 12. Baseball-Reference.com.