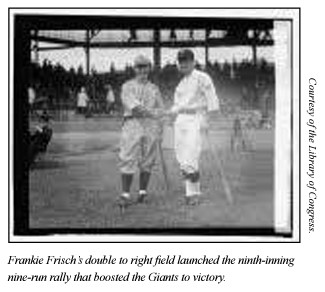 “It was not a contest to contribute to the peace of mind and self-approval of pitchers.”1

In a game featuring an absence of pitching talent by the home team in the ninth inning, the New York Giants came from behind, scoring nine runs on 11 hits, nine of them in a row, in their last at-bat to defeat the Phillies at the Baker Bowl, 11-8. The win on May 7, 1925, in front of 3,000 onlookers, gave the Giants two victories in the three-game series.

Jimmy Ring (0-2) started on the mound for Philadelphia and after allowing single runs in the first two innings shut the Giants down while his mates scored eight runs to take a commanding lead. This was a revelation for Ring, as his teammates had scored single runs in each of his two losses before this game.

The Giants broke out on top in the first inning on singles by Billy Southworth, Frankie Frisch, and Fred Lindstrom. The Giants’ starting pitcher, Art Nehf, doubled in the second inning and came home on Southworth’s second hit in as many innings.

The Phillies cut the lead in half in the second inning as Nelson “Chicken” Hawks, who had three hits in the game, doubled off the scoreboard in right-center and came home on the first of Jimmie Wilson’s two RBI singles. A promising inning was disrupted by two Giants defensive gems. Hank Gowdy threw out Wilson trying to steal second base. After a single by Heinie Sand, Ross Youngs saved further immediate damage by charging to catch a line drive off the bat of Clarence Huber. Nehf struck out Ring to end the inning.

The Philadelphia scoring effort was aided by six errors by the visitors, three of which came in the fourth inning, when Philadelphia took the lead with four runs, only one of them earned. Hawks singled and Philadelphia had runners at the corners when Wilson followed with a single. Sand’s single to center field tied the game, with Wilson advancing to third base. Nehf retired the next two batters, but the Phillies still had a pair of runners on base. The Phillies then attempted a double steal and Giants catcher Gowdy had Wilson caught between third and home. His throw to third baseman Fred Lindstrom surprised the cornerman. The third baseman muffed the throw, allowing Wilson to score. Sand took third on the play. George Burns hit a groundball to the right side. Frisch made a great play on the ball but threw errantly to first. Sand scored and Burns reached second. On the ensuing play, another fielding lapse by the Giants led to the Phillies’ fourth run of the inning. Wally Kimmick bunted a slow roller that first baseman High Pockets Kelly fielded but his throw to first was wild, allowing Burns to score from second base. The Phillies took a 5-2 lead to the fifth inning.

Nehf was knocked out of the box in the fifth when the Phillies added two runs to their lead. A leadoff walk to Johnny Mokan and a homer by Hawks made the score 7-2 and earned Nehf some time off. He was relieved by Kent Greenfield. Greenfield pitched through the seventh inning and gave way to Walt Huntzinger, who pitched a scoreless bottom of the eighth.

Misplays by Greenfield and Southworth gave the Phillies their eighth run. In the sixth inning, Burns opened with a single and took second when center fielder Southworth mishandled the ball. Russ Wrightstone’s grounder to first base resulted in an unearned run when Greenfield, late in covering first base, dropped the throw from first baseman Kelly.

In the top of the eighth inning, after a two-out single by Gowdy, Jack Bentley pinch-hit for Greenfield and was retired on a popup. Huntzinger took over on the mound and pitched a scoreless bottom of the eighth.

The Phillies, with Ring pitching in and out of trouble, took an 8-2 lead to the ninth inning. Although the Giants had managed to get a hit in every inning, Ring had managed the situation, leaving New York with seven stranded runners during the six scoreless innings.

Ring’s luck ran out. After Southworth flied out to center field to open the ninth, Frisch doubled to right field. Singles by Youngs, Kelly, Lindstrom, and Irish Meusel scored two runs, chasing Ring from the mound. The Phillies brought in Art Decatur with the bases loaded.

The pitching change made no difference. Travis Jackson greeted Decatur with a run-scoring single. Due up for the Giants was Gowdy, but manager John McGraw sent up Bill Terry as a pinch-hitter. Terry kept the rally going with a hard single past second baseman Russ Wrightstone that scored two runs. Terry came out of the game for pinch-runner Mickey Devine. Hack Wilson batted for pitcher Huntzinger and cleared the bases with a three-run homer that gave the Giants a 10-8 lead. It also sent Decatur to the showers. The new Phillies pitcher, Johnny Couch, yielded a double to Southworth. The Giants’ consecutive hit streak ended at nine as Couch got Frisch to fly out to Mokan in center field. Southworth took third base on the play, and a single by Youngs brought Billy with the ninth and final run of the inning. A single by Kelly knocked Couch out of the game and resulted in the Phillies using their fourth pitcher of the inning. Ray Pierce came in and retired Lindstrom for the final out.

Jack Scott retired the Phillies in the ninth inning to secure the win for New York, allowing a one-out double to Huber that proved harmless.

Huntzinger received credit for his first win of the season. He had yet to lose and his ERA was 0.00 after three appearances. For the season, he went 5-1 with a 3.50 ERA. The loss went to Decatur, who had crashed and burned with the bases loaded in the ninth inning. He was, at that point, 0-2 with a 12.86 ERA. After one disastrous appearance with Brooklyn on April 23, he had been traded to the Phillies and wound up having a rather forgettable season, going 4-13 with a 5.37 ERA.

With the win, the Giants, who were going for their fifth consecutive National League pennant, pushed their record to 12-5 and took a one-game lead over Cincinnati. For the season, they went 86-66 and finished second to the Pittsburgh Pirates. The Phillies’ record stood at 9-10 and they went downhill to a 68-85 record, finishing in a sixth-place tie with Brooklyn.

Hack Wilson, who hit the decisive homer, was in the third year of his major-league career. In those first three years, all with the Giants, Wilson had a grand total of 16 homers and 87 RBIs. At the end of the 1925 season, he was traded to the Chicago Cubs and his career took off. In six of the next seven seasons, he had more than 20 homers and 100 RBIs. In 1930 he set National League records with 56 homers and 191 RBIs. The home-run record lasted until 1998. The RBI record still stood as of 2020.

Frankie Frisch, 2-for-6 with a double that launched the rally on May 7, was in the midst of his fifth consecutive season batting .300 or more. The streak would ultimately go to 11 seasons. He batted .316 during his 19-year career, won the MVP in 1931, led the league in hits (223) in 1923, and was a three-time stolen-base leader. He managed the Gas House Gang Cardinals to the 1934 World Series championship (batting .305 in the process) and entered the Hall of Fame in 1947.

Bill Terry was in the midst of his breakout year with the Giants. His ninth-inning hit brought his early season average to .313. He finished the season with a .319 average and his 254 hits in 1930 propelled him to a .401 average, making him the last National League player to reach the .400 threshold. He was a Hall of Fame inductee in 1954.

In addition to Baseball-Reference.com and the source cited in the Note, the author used: