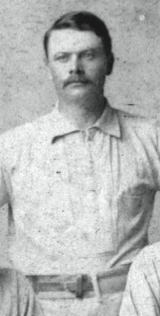 The baseball game played on May 8, 1878, between Providence and Boston would not have been considered one of the 100 greatest games of the 19th century except for one enduring and still controversial question: Did Providence center fielder Paul Hines, in the eighth inning of this match, achieve the first unassisted triple play in major-league baseball? Or was it a misunderstanding encouraged by the publicity-seeking Hines that eventually grew into a myth?

In an essay titled The Unassisted Triple Play,[fn]http://www.vfcc.edu/aboutVFCC/?p=showthinkAboutIt&id=190[/fn] Don Meyer defines an unassisted triple play as occurring “when a defensive player makes all three outs in one continuous play without any other teammate touching the ball.”

The game was played at the Messer Street Grounds in Providence in front of 4,500 fans. In the earliest report of the game, printed in the Boston Evening Transcript the next day, Hines is credited with a “triple play” only, with no mention of its being unassisted: “In the eighth inning there was great excitement, when, through errors of the Providence club, Jim O’Rourke scored and Jack Manning and Ezra Sutton were on bases. Jack Burdock struck a fly—just beyond Tom Carey—which Hines caught after a long run, ran to third base and put out Manning and threw to second, putting out Sutton and making a triple play.” Providence won the game, 3–2. However, the story in the Providence Journal the next day reported that “Manning and Sutton proceeded to the home plate,” meaning that both rounded third.

According to 1878 rules, if both players passed third base, they would have been out when Hines stepped on the bag, and the play would have indeed been unassisted. Arthur Irwin was quoted in an 1897 book, A History of the Boston Base Ball Club, as saying, “The greatest play I ever saw was made by Paul Hines. … he caught a low fly ball behind the shortstop on a full run, continuing on to third base where he put out the two men … from second and third bases, making the treble play unassisted.”

On August 24, 1902, the New York Times wrote that “it was not until the fall of 1888 that the public was informed (through a magazine article) that (an unassisted triple play) had been accomplished.” Apparently the claimed achievement was soon contradicted by Providence second baseman Charles Sweasy. The Times quoted him as stating: “I assisted Hines in making the triple play mentioned so largely in the public prints. The ball was struck by Burdock to short left field. Hines started for it on a dead run, and succeeded in catching it, but nearly stumbled. Regaining his feet, however, he kept on running to third base, reaching that station before Manning could return, thereby putting Manning out. Sutton, who had reached third, seeing Hines coming with the ball, started back to second. Hines touched third and started to catch Sutton; but, Sutton being a good sprinter, Hines saw that he could not catch him, and threw the ball to me at second base in time to catch Sutton before he reached it.” The rules did not require Hines to throw to Sweasy to put Sutton out. Did he do it just to be certain? 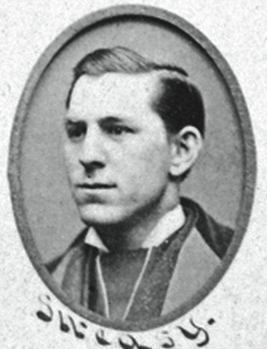 The question was visited again in the May 1947 issue of Baseball Digest, which said that former Boston first baseman Tim Murnane, later a baseball writer in Boston, was “the first to bestow this honor upon Hines.” The article said, “Some years later the claim was disputed by George Moreland and an investigation proved Murnane to have been in error. … Providence was leading, 3–0, when an eighth-inning error gave Boston a score, putting Manning on second with Ezra Sutton on first and none down. Blackie Burdock, Boston’s famous second baseman, hit a fly to deep short. Hines went after it like a deer, nailed the ball on a 35- yard run and kept on going to third, tagging Manning, who had overrun the bag, and then throwing to Sweasy at second to catch Sutton for a triple play.”

So, is it a debunked myth or a disputed accomplishment? Was it simply the product of the fuzzy memories of old teammates and/or Hines’s desire for public acclaim? While the early reporting seems to establish that it was indeed an unassisted triple play under the rules of the time, and that Hines’ unnecessary throw to second merely confused the issue, the debate lives on, in part because of the very rarity and extreme difficulty of the unassisted triple play. There are more perfect games on record than unassisted triple plays. So, no matter where fans of baseball history stand on the question, it’s still fun to talk about. 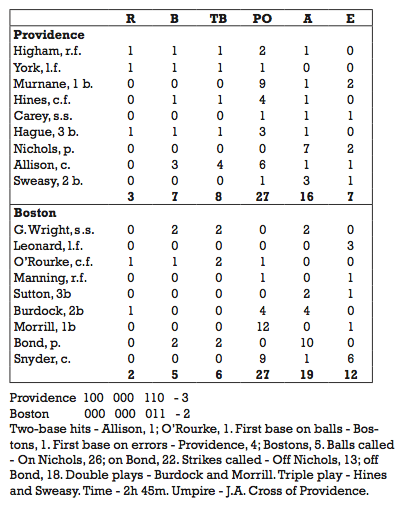