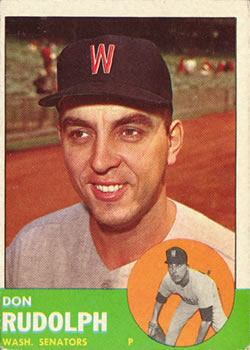 Left-hander Don Rudolph stood out for two reasons in the early 1960s: He was married to a highly paid exotic dancer, and he worked faster on the mound than any of his contemporaries. Neither of those achievements, however, played a part in the performance of his career the evening of Wednesday, May 8, 1963, at Washington’s D.C. Stadium.

After 12 seasons in the minors, Frederick Donald Rudolph was toiling for the hapless expansion Senators, a team on its way to what would be the worst year in its 11-year existence: 56-106 and a third straight season in the American League basement. On this night, however, the Nats stood at 10-16, in last place but just half a game behind the two teams ahead of them.

The May 1963 issue of Baseball Digest, still on the newsstands, had featured a photo of and an article about Rudolph and his wife, who went by the stage name of Patti Waggin. “No wonder he hurries home!” the photo caption on page 2 began.1 She was one of the top-earning burlesque performers in the country.2 During her act, her husband “stands in the wings and catches her clothes as she steps out of them.”3  Asked when he first came up briefly with the White Sox how he dealt with bench jockeying about his wife’s occupation, Rudolph said it didn’t bother him much, but “when it gets too rough, a high, hard one under the chin usually shuts them up.”4

Three days earlier, at end of a road trip against the White Sox, the Senators had scored five runs in the ninth to win, 8-7. Still, they were facing an Indians’ team on a five-game winning streak. The Indians had won, 7-3. the previous night in 11 innings, despite a two-run rally in the ninth by the Senators to tie it. Claude Osteen for the Nats and Sam McDowell both had pitched well, for naught.

Rudolph, traded to Washington in May 1962, won a job in the Nats’ rotation that season and finished 8-10 with a 3.62 earned run average for a team that lost 101 games. At one point, he threw 31 consecutive scoreless innings, a record matched just once during the life of the expansion club. He did it in a hurry, too, finishing six of his games in an hour and 47 minutes or less.5 “He pitches like a man on his way to catch a plane,” Bob Addie wrote in his Sporting News column in August 1962.

“It should not require three hours to do a two-hour job,” Rudolph said when asked about a new rule for 1963 limiting pitchers to five warm-up tosses, instead of eight, to start an inning. He normally threw no more than three. “I do not have to stand on the mound between pitches to study each hitter because I go through that before the game,” he told Baseball Digest for its May article.6

Rudolph was given the 1963 opening day assignment, with President John F. Kennedy on hand, but lost 3-1 to the Orioles on two home runs.7 Plagued by the gopher ball, Rudolph had spent time in the bullpen in late April.

His record stood at 2-2 when he faced fellow lefty Jack Kralick. The newly acquired Cleveland pitcher was a former Washington Senator, albeit with the franchise that moved to Minnesota, which had traded him to the Indians a week earlier for Jim Perry. This was Kralick’s first start for Cleveland. At 1-4, his lone victory in ’63 had been a three-hit shutout of the Nats in Washington two weeks earlier.

A crowd, if you can call it that, of just over 7,000 was on hand for the night game. “Boos greeted third base Umpire Alex Salerno,” the Washington Post reported.8 Behind home play the night before, he had ejected three Nats and cleared the bench over a disputed strike call.

Cleveland scratched out a run without a hit in the second. Tito Francona walked. He stole second when catcher Don Leppert’s throw was high. Mike de la Hoz bunted Francona to third. De la Hoz was safe on an error by Chuck Hinton, an outfielder by trade playing third base. A safety squeeze by Tony Martinez scored Francona.

Hitless through five, Washington tied it in the sixth. Ed Brinkman, whose three hits in the game lifted his average to .284, led off and doubled to left. Rudolph bunted him to third and Jimmy Piersall brought him home with a sacrifice fly to center.

Rudolph, meanwhile, gave up his first hit — a single by Martinez — with two outs in the fourth. He ended the frame on a force-out grounder and began mowing down the Indians in order for the next eight innings.

Kralick was almost as sharp. A fifth-inning walk to Don Lock produced Washington’s lone base runner before Brinkman’s double. The lefty gave up two singles in the eighth, then worked out of a jam in the bottom of the 12th.

Minnie Minoso led off with a single. Hinton bunted him to second. Lock drew an intentional walk. Bobo Osborne walked to load the bases, bringing up Leppert, who had nearly homered to deep center in the eighth. With the infield in, the Nats’ catcher grounded to short and Minoso was out at the plate. A pop-up ended the threat.

De la Hoz ended Rudolph’s bid for a perfect game-within-a-game with a lead-off single in the 13th. After a pop out, catcher John Romano tripled to center. Cleveland manager Birdie Tebbetts pinch hit for Kralick with Al Luplow. Rudolph struck him out, but Vic Davilillo’s infield single scored Romano. A fly-out ended the inning, but it looked like Rudolph’s stellar effort would end in a loss.

Barry Latman, who had blown the save the previous night, took over for Kralick. He was greeted by singles by Brinkman and Dick Phillips, pinch hitting for Rudolph. Tebbetts yanked Latman for Ron Nischwitz. The Nats countered by replacing Ken Retzer, who had been announced to bat for Piersall, with Marv Breeding. A single to right by Breeding brought home Brinkman and sent Phillips to third with nobody out. Again, the Senators’ rally seemed to stall. Phillips was thrown out at the plate on Minoso’s grounder to third. Nischwitz then walked Hinton to load the bases.

At this point, Lock had homered just once in the first 26 games, even though he would end the season with 27, a team record until he hit 28 in 1964. The former Yankee farmhand didn’t disappoint. His second homer of the season was a game-winning grand slam that made the Nats 6-3 winners.

Although it went 13 innings, the game lasted just three hours and eight minutes. As usual, Rudolph threw few warm-up pitches once the game began. The Senators shut out the stunned Indians the next night to improve to 12-16, ahead of the Tigers and Twins — the season’s high point, regrettably, for Washington fans.

The fast working lefty’s season — and career — had few other highlights. By late September, Rudolph had lost 19 games, including his last eight decisions. He was pulled from the rotation to try to keep him from losing 20.9 He spent part of 1964 in the minors and was released by Washington at the end of the year.

Rudolph spent two more years at Triple A before retiring from the game. He died tragically in September 1968 at a construction job when his pickup truck overturned on a steep incline. He was just 37, leaving behind his widow and their seven-year-old daughter.

2 To this day, the late “Patti Waggin” (real name: Patricia Hartwick) has a robust presence on the web. Although the details about Don’s career are not always accurate, here’s a link to one site: https://rideapart.com/articles/legend-patti-waggin-burlesque-dancer-motorcycle-racer

7 I was in the stands for that presidential opener, the only one I ever attended.