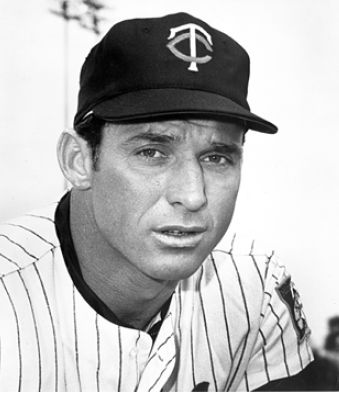 The Minnesota Twins rallied from a 7-1 deficit with three runs in the sixth inning and four runs in the seventh to top the Kansas City Athletics 10-8 in this Saturday afternoon game. The Twins outhit the A’s 14 to 5 and outhomered them 4 to 3. Twins pitchers struck out 12 batters but 10 walks and five timely hits by the A’s led to eight runs and a daunting early lead. Each team used four pitchers, with four effective relief innings from Twins left-hander Gerry Arrigo highlighting the win. Arrigo had started the previous game for the Twins on Friday night but was knocked out after 1⅓ innings after giving up five runs on three hits in what turned into a 6-5 loss for the Twins.

Lee Stange started the game for the Twins and Orlando Peña for the A’s. A solo home run by Rich Rollins in the first inning (his fourth) gave the Twins an early lead. It should have been 2-0 but Zoilo Versalles, who led off the frame with a single, was picked off first base by Peña.1 The A’s struck back in the third inning with four runs while collecting only two hits. Wayne Causey led off with a home run (his first), then two walks, a fielder’s choice, and a three-run homer by Manny Jimenez (his third) knocked out Stange.2  Jim Roland entered the game and threw 10 consecutive balls. Bill Fischer was quickly summoned into the game and despite a 2-and-0 count on pitcher Peña, struck him out on four pitches.3

In the fourth inning Fischer walked leadoff batter Causey, retired two batters, then surrendered a single to Jim Gentile and a home run to Rocky Colavito (his league-leading ninth), giving the A’s a 7-1 lead. Fischer walked another batter before retiring the side. In the bottom of the fourth, the Twins crawled a bit closer with solo home runs from Jimmie Hall (his eighth) and Bob Allison (his seventh).

Fischer retired the A’s one-two-three in the fifth inning, and Arrigo relieved him at the start of the sixth. Arrigo struck out the side in that inning and recorded another strikeout in both the seventh and eighth innings. He walked pinch-hitter George Alusik in the eighth inning, but a 4-6-3 double play meant he faced the minimum of nine batters in three innings.

Don Mincher’s third home run of the season, after singles by Tony Oliva and Allison, knocked Peña out in the sixth inning and brought the Twins to within one run at 7-6. Mincher, at first base, and Allison, in left field, were in the starting lineup because Twins manager Sam Mele had decided to give Harmon Killebrew a day off to nurse his .167 batting average.4

Jack Aker got the Twins out after replacing Peña in the sixth inning, but in the seventh he walked Versalles and the Athletics’ Causey booted Oliva’s groundball that looked like a sure double play. Versalles took third base on the error and Oliva went to second base. Jimmie Hall was intentionally walked to load the bases. On 1-and-2 pitch, Bob Allison lined a double into the left-field corner, scoring three runs and giving the Twins a 9-7 lead.5 Earl Battey singled in Allison, Joe Grzenda replaced Aker and after he got Vic Power to fly out, Earl Battey singled in Allison, giving the Twins their 10th run.

In the ninth inning Arrigo walked Ed Charles with one out. Jim Gentile then struck out for the second out, but Colavito scored Charles with a double. Manny Jimenez struck out to end the game. Arrigo gave up only one hit in four innings and collected his second win of the season, both against Kansas City. He struck out seven and walked two. On May 2 in Kansas City, Arrigo was the winning pitcher in a 7-3 Twins win in 11 innings. Arrigo finished the season with a record of 7-4 in 41 games, 12 of which were starts. He had 96 strikeouts in 105⅓ innings with an earned-run average of 3.84. After the season, after four years with the Twins, Arrigo was traded to the Cincinnati Reds for Cesar Tovar.

Asked about the difference between his Saturday performance and his start on Friday, when he was knocked out in the second inning, Arrigo said after the game that as a relief pitcher he did not have time to get jittery. Manager Mele commented, “We figure it is just as well not to let him know when he is going to start. Maybe that’ll help with our pitching staff. Something has to. I’ve taken more walks than Harry Truman.”6

Despite the win, Twins outfielder Bob Allison expressed underlying uneasiness. “There are a few things we’re going to have to get straightened out on this team,” he said. “We’re playing some pretty miserable baseball. We’ve got the personnel to be a contender and a pennant winner. We sure haven’t looked it, even winning like we did today.”7

The win evened the Twins’ record at 11-11, three games in back of the league-leading Chicago White Sox. (The deficit was reduced to 2½ games after the White Sox lost at Los Angeles at night.) It dropped the A’s to 8-12. The season record between Kansas City and the Twins was evened at three games each, with Minnesota outscoring Kansas City 43-37 and hitting 20 home runs to the A’s 13. The four homers in this game gave the Twins a total of 40 in 22 games.8 They would hit 221 home runs in 1964, just short of their club record 225 homers hit the year before. Those 225 home runs would last as the club record until the 2019 squad blasted its way to a major-league record of 307.

The Twins finished the 1964 season with a record of 79-83, tied for sixth place with the Cleveland Indians. The A’s, despite the worst record in the American League, 57-105, were very competitive against the Twins in 1964. The teams were 8-8 in their 16 games. Tony Oliva gave the A’s plenty of trouble, batting .457 in 18 games with seven homers and 18 runs batted in.9

The St. Paul Pioneer Press, the Minneapolis Tribune, and Retrosheet all listed the paid attendance as 9,219. The Tribune mentioned that the actual crowd was much larger, and a bit more raucous than that, as 10,629 children were admitted free after a youth baseball clinic in the morning. That added up to 19,848. Arno Goethel, in his game account in the Pioneer Press, mentioned the attendance as 18,646, a discrepancy of 1,202 that may never be resolved.

6  “Arrigo Turnabout: No Nervousness,” Minneapolis Tribune, May 10, 1964: S7. The allusion to Truman was a reference to the former president’s habit of taking walks for exercise.