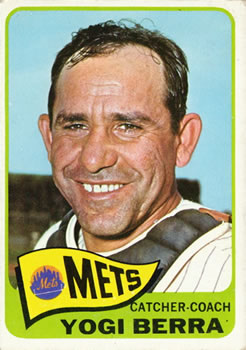 Yogi Berra played in 2,120 major-league games. All but four of them were in a New York Yankees uniform.

The three-time American League MVP ended his playing days with the crosstown Mets; his final effort came on May 9, 1965, in the first game of a Mets-Braves Mother’s Day doubleheader at Shea Stadium. Berra went 0-for-4 and made one error in the 8-2 loss; it was the eighth defeat in the last 10 games for the Mets.

Milwaukee scored early. Al Jackson, a southpaw who went 8-20 that season, began the game by striking out Felipe Alou and dispatching Eddie Mathews on an unassisted groundout to Ed Kranepool, who had a busy day with 13 putouts at first base. Hank Aaron singled and moved to second base when Jackson balked; Joe Torre, nine-time All-Star and future MVP (1971), put the Braves up 2-0 with a home run to left field. The offensive stream continued when Gene Oliver singled and Jackson plunked Denis Menke. But left fielder Mack Jones ended the threat by flying out to his Mets counterpart, Joe Christopher.

The Braves enhanced the tally in the second inning because of Berra’s error — with two outs, Alou doubled and Berra flubbed a Mathews foul popup. Then Mathews singled home Alou. Aaron’s single put runners at first and second, but Torre’s groundout stopped further damage. Milwaukee grew its cushion in the third, when Menke singled and Jones bashed a two-run homer to right field. Frank Bolling then singled and that was the last of Jackson; right-hander Galen Cisco replaced him.

Berra led off the bottom of the third with a strikeout and Roy McMillan followed with a fly out to Aaron. Mets skipper Casey Stengel sent in Danny Napoleon to pinch-hit for Cisco; he singled. But Bobby Klaus flied to Alou, ending the inning.

Neither team scored in the fourth inning; Milwaukee was blanked in the top of the fifth, too. But the Mets scored their only two runs in the game in the bottom of the inning. Tony Cloninger walked Christopher and Ron Swoboda walked. (He led the NL with 119 walks that season.) Berra struck out; McMillan singled, scoring Christopher and sending Swoboda to third; Napoleon’s single scored Swoboda.

The Braves added to their lead in the top of the seventh on a three-run bash by Menke with Torre and Oliver on base through a single and double, respectively. By the end of the game, the Braves had left six men on base; the Mets, seven.

In addition to Jackson and Cisco, Stengel sent right-handers Frank Lary, Carl Willey, and Tom Parsons to the mound. The Braves’ Cloninger pitched a full game for his fourth victory in a 24-11 season; in addition to his league-leading walks (119), he also topped the major leagues in wild pitches (22).

Berra’s four games with the Mets had brought him out of retirement. The malapropism-prone catcher began his career with the 1946 Yankees and played seven games that year; he stayed in pinstripes through 1963, his one season as a player-coach. The Dodgers swept the Yankees in the World Series and Berra succeeded Ralph Houk in 1964 as manager for the dynastic squad that had won 10 World Series titles since 1947. But Berra’s helmsmanship in pinstripes was a short-lived experience — the front office ousted him after the Yankees lost the World Series to the St. Louis Cardinals in seven games. The Mets signed him a month later as a coach.1

Reunited with his former Yankees manager, Stengel, the Mets’ inaugural skipper, Berra gave advice backed by an encyclopedic knowledge of baseball belying his lovable but daft persona. His desire to get off the bench manifested itself in the four games, but two days after the May 9 doubleheader (New York won the second game, 5-4), Berra announced his retirement as a player and became a full-time coach. Stengel needed to reduce the Mets by two players to reach the limit of 25. Willey was the other sacrifice; the Mets sent him to the Triple-A Buffalo Bisons.2

It was Stengel’s idea to bring Berra to Queens. When the craggy-faced manager retired in late August, he praised Yogi: “I thought he did a good job managing the Yankees last year. He won the pennant, didn’t he? When he was out of a job, I wanted him and told him to get in touch with Mr. [George] Weiss right away.”3

No longer able to perform at his standard, the backstop and occasional outfielder professed physical maladies as the reason for retirement.

“After each game, I was aching,” explained Berra. “It got me in the back more than in the legs.

“The worst of it was that I could not follow the ball at bat. My reflexes were slow.”

There was no doubt on Berra’s retirement this time. He answered, “Forever” when asked.4 The next day, he turned 40.

New York finished the 1965 season at 50-112 as America’s television audiences laughed at the antics of Dick Van Dyke and Lucille Ball; found rural refuge in the fictional North Carolina burg of Mayberry and the fish-out-of-water Clampett family in Beverly Hills; and enjoyed the espionage escapades of Illya Kuryakin and Napoleon Solo.

Berra was promoted to manager when Gil Hodges died of a heart attack right before the 1972 season. The Mets fired him in the middle of the 1975 season. Berra went back to the Yankees as a coach in 1976, became manager in 1984, and was fired 16 games into the 1985 season. He packed his bags for Houston, where he was a coach with Astros from 1985 to 1989.

In Berra’s 1989 memoir, It Ain’t Over, several cohorts offered their insights on the Hall of Fame catcher. Jackson wrote, “He didn’t know the National League hitters, but he knew hitters. He worked with me and got me to throw changeups. I threw offspeed, but he had me throwing a real change. I went along with him. You had to. You had to listen to him.”5

During Torre’s turn at managing the Yankees (1996-2007), Berra was one of his coaches. At Berra’s funeral in 2015, Torre concurred: “And he was remarkable to sit next to at those ballgames because he stayed all nine innings and he would pick things up. Jorgie [Posada] would be catching and he’d say, you know just look at this and that, and he’d always pick some little thing of analyzing this game. He was so good.”6

The author used Baseball-Reference and Retrosheet.org for box scores and play-by-play information:

3 Barney Kremenko, “Westrum, Berra and Stanky Top List of Met Candidates,” The Sporting News, September 11, 1965: 5. Stengel was referring to Mets general manager George Weiss, who had been the Yankees general manager in the 1950s.