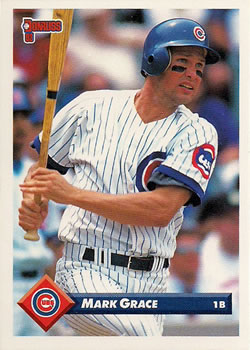 Leaving your mark in a graceful manner can be quite difficult. “I’ll probably never do it again,” said the Chicago Cubs’ Mark Grace about hitting for the cycle against the San Diego Padres in the Windy City. “I don’t hit many triples.”1 Grace’s three-run home run in the bottom of the ninth almost capped the Cubs’ unlikely comeback. “Personally, it was the greatest day of my career,” said Grace, but unfortunately, the Padres won.” 2

Heading into the May 9 contest, the two National League teams were both off to a struggling start to the 1993 season. The Padres were 12-16, in fourth place in the NL West Division, six games back of the San Francisco Giants. Leading the Padres into action was skipper Jim Riggleman, who had served as the team’s interim manager at the end of the 1992 season. The NL East Division Cubs, piloted by Jim Lefebvre, were sitting at the .500 mark (14-14). They were in fourth place, trailing the Philadelphia Phillies by seven games.

On the hill for the Padres was a converted reliever, right-hander Greg Harris, who owned a record of 32-35 (1-5 thus far in ’93) in parts of six seasons. Toeing the rubber for the Cubs was six-year veteran Jose Guzman, a prized free-agent acquisition coming off a 16-11 campaign with the Texas Rangers. Guzman’s 3-2 mark thus far in ’93 pushed his career record to 69-64.

It was a warm, 76-degree Sunday afternoon on the North Side of Chicago. Wrigley Field was packed with 30,062 spectators when the players stepped between the lines to play the third contest of the three-game series. In true Wrigley fashion, the wind played a factor in the game, blowing out to left field at 14 mph. Come 1:23, the game was underway as Guzman threw the first pitch. Jeff Gardner led off with a double and scored on Gary Sheffield’s one-out triple down the left-field line. Fred McGriff’s single put the Padres up 2-0. After three consecutive losing seasons and fourth-place finishes, Grace was tired of losing. “We need to jump out ahead and give our starters a cushion rather than play catchup the whole time,” he said after the game. “It’s tough to win ballgames consistently playing catchup.”3 Grace doubled with two outs in the first and moved up a station on Ryne Sandberg’s single, but the Cubs failed to score.

Still trailing, 2-0, in the bottom of the third, the Cubs started a rally with singles from Jose Vizcaino (who extended his hitting streak to 11 games) and Grace. Ryne Sandberg, en route to his 10th consecutive and final All-Star selection, singled through the shortstop and third-base hole to plate Vizcaino and halve the Padres’ lead. After Sammy Sosa drew a two-out walk, Rick Wilkins threatened to break the game open with a bullet to right but it was directly into the mitt of Tony Gwynn. “It’s pretty much what’s taken place all year,” said Wilkins, who entered the game batting an atrocious .150. “[W]hen I have a good at-bat, I seem to hit it right at somebody.”4

The Padres answered the Cubs’ scoring in the top of the fifth inning when eight-time All-Star Gwynn gave the Padres a 3-1 lead by sending a two-out grounder through the box for a single, scoring Harris, the light-hitting pitcher who had singled.

In one of the most exciting plays of the game, the Cubs’ Willie Wilson, pinch-hitting for Guzman, sent a screecher down the right-field line with two outs in the sixth. Still considered among the fastest players in the game at the age of 36, Wilson tried to stretch his triple into an inside-the-park home run, but was gunned down at the plate by shortstop Kurt Stillwell’s perfect toss to catcher Bob Geren, who made a lunging tag. “I thought I had it,” said Wilson, who did not side and admitted, “I was out of gas.”5

Not known for his speed, Grace ripped a two-out triple to left field off Harris in the seventh. Harris retired Sandberg on his 93rd and final pitch to end the inning.

The Padres tacked on another run in the eighth when McGriff led off with a home run to deep left field off new reliever Chuck McElroy. The “Crime Dog’s” fifth round-tripper extended the Padres lead to 5-1.

After squandering a leadoff single by Derrick May in the eighth, the Cubs began the final frame needing four runs to tie the game. Facing reliever Roger Mason, beginning his second inning of relief of Harris, Wilkins started the rally with a single to right. After two quick outs by pinch-hitter Rey Sanchez and Dwight Smith, Vizcaino singled. Riggleman pulled Mason and inserted southpaw Rich Rodriguez to match up against the left-handed hitting Grace.

A long ball removed from a cycle, Grace sent a 1-and-0 pitch deep over the right-center-field fence for a home run, giving him the cycle. More importantly, Grace’s fourth home run pulled the Cubs within one run of the Padres. Facing closer Gene Harris, the next Cubs batter, Sandberg, lined a two-strike pitch to shortstop Stillwell to end the game in 2 hours and 34 minutes.

Lefebvre provided some insight into the Cubs’ disappointing loss, their 10th of the season by one or two runs. “We’ve still got to keep a team down; late in the game you can’t just give up one run here, one run there.”6 Guzman was charged with the loss while Greg Harris, who yielded just one run in seven efficient innings, picked up the victory. The Cubs collected 13 hits, including six for extra bases, and drew two walks, yet managed just five runs. They hit 3-for-11 with men in scoring position and left nine men on base. “We hit the ball good in a lot of situations,” said Cubs skipper Lefebvre. “We just hit the ball right at ’em.”7

Grace’s 4-for-5 afternoon raised his average to .349. “He’s off to a heckuva start,” admitted Riggleman. “He’s always been a good hitter, but this is the best I’ve ever seen him.”8 Grace deflected attention away from himself after the game and suggested that the Cubs, despite falling one game under .500, were far from dead: “This is the only team I’ve ever played on, period, that battles all the way down to the end.”9