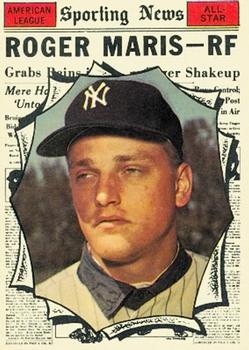 On October 1, 1961, ending a quest that had enthralled both the baseball world and the American public, New York Yankees outfielder Roger Maris capped one of the most spectacular seasons in baseball history when, with one swing of the bat, he became the major-league single-season home-run leader.

The New York Yankees had begun the month of September with a 13-game winning streak that not only separated them from the field but also put to rest any doubts about their ability to repeat as American League champions. That fact, combined with the injuries to slugger Mickey Mantle that had removed him from the season-long pursuit of Babe Ruth’s iconic home-run record, left the Yankees’ regular-season finale noteworthy only for the historic opportunity it afforded Maris to surpass the Babe’s hallowed mark of 60 home runs in a single season. And yet for all its historic potential, the reported crowd was little more than a third of what the iconic Yankee Stadium could hold. But in its own way, that lackluster crowd was reflective of the season-long controversy surrounding the record chase, a controversy that had come to a head with Commissioner Ford Frick’s summertime declaration that any new record would have to be achieved within the confines of the traditional 154-game schedule and not the new expansion-induced 162-game slate. That announcement alone probably diminished interest in the season’s final game. Too, for many longtime baseball fans, the idea of Roger Maris as the heir to Babe Ruth was, fairly or not, preposterous, and that fact also may have reduced the number of onlookers at Yankee Stadium that day. And yet from the outset, those in attendance, a boisterous crowd officially recorded as 23,154, left no doubt that they knew they could be witnesses to something special, baseball history being made before their very eyes.

Although the World Series was slated to start the next Wednesday, first-year Yankees manager Ralph Houk fielded his regular lineup absent only the injured Mantle who was still in the hospital but who was expected to be released in time to start Game One of the Series. Filling in for him was John Blanchard, who played right field while Maris moved to center. On the mound for the Yankees was Bill Stafford. The second-year right-hander, who was scheduled to pitch World Series Game Three against Cincinnati, was seeking a 14th win in this final pre-Series tune up. Facing the American League champs were the Boston Red Sox, a team finishing their first season of the post-Ted Williams era, a campaign that had left them in sixth place, with a 76-85 record heading into the final game of the season. On the mound against a Yankees team that had set a major-league record with 240 home runs was rookie Tracy Stallard.

Under a cloudy sky and with a game time temperature of 70 degrees, Stafford threw the game’s first pitch at 2:03 P.M. and quickly dispatched the Red Sox, striking out the side. The tension in the historic ballpark was evident as the Yankees came to bat: Maris, batting in his customary third slot in the batting order, would get his first chance to hit in the home half of the inning.

As second baseman Bobby Richardson came to bat to lead off the Yankees half of the first, the anticipation grew. After Richardson grounded back to the pitcher, shortstop Tony Kubek’s single to center brought up Maris for his first at-bat against 24-year-old right-hander Stallard. After taking the first pitch for a ball, Maris, the quintessential pull hitter, was fooled by changeup, and instead of driving the ball to right, lofted one to the opposite field, where left fielder Carl Yastrzemski hauled it in for the second out of the inning. A passed ball moved Kubek to second but Yogi Berra’s pop fly to second ended the Yankees’ at-bat.

The game quickly settled into a pitchers’ duel. After Stafford retired the Red Sox in order in the second, Stallard did the same to the Yankees. And while Stafford proceeded to retire six of the next seven batters he faced, leaving him with a one-hitter through four innings, Stallard opened the fourth by striking out Kubek, making him the ninth straight batter the young right-hander had retired. Next up was Maris, and as he approached the plate he was greeted with a roar. Stallard’s first pitch to Maris was a ball outside; his second was low and in the dirt. The crowd, anxious to see Maris hit, booed Stallard’s careful approach to the slugging outfielder. Stallard quickly delivered the 2-and-0 pitch, and as he had done so many times before that season, the left-handed-hitting Maris turned on the ball and sent it flying into the right-field seats, not far from the Yankees bullpen where his teammates were poised to grab the historic ball. Instead, the record-breaking ball was grabbed by a young man, Sal Durante, who was quickly hustled to the safety by the police.

Meanwhile, as the crowd roared, Maris, who recalled that he thought it was gone as soon as he hit it, made his way around the bases, jogging head down, as he had done 60 other times that season. After being congratulated by third-base coach Frank Crosetti and greeted by Yogi Berra at home plate, the happy Maris headed to the dugout. However, the shy record-holder’s teammates would not allow him to remain there, instead pushing him back out onto the field to acknowledge the fans who were joyfully and exuberantly cheering his name and celebrating his unprecedented accomplishment.

Maris’s single run held up as the game’s only offense as both pitchers cruised through the opposing lineups. Stafford continued to impress in his Series tuneup, ultimately leaving after the sixth having given up only three hits while striking out seven. He was relieved by Hal Reniff, who pitched a perfect seventh, striking out one. Meanwhile, the Yankees’ offense was no more productive. While the American League champs managed to collect two hits in the bottom of the seventh, putting men on second and third, before Stallard induced pinch-hitter Tom Tresh to pop up to short, in the end Maris’s home run proved to be the extent of their offensive output.

Maris himself had two more at-bats, but like much of the game after his record-setting blast, they were anticlimactic. Emotionally spent, he struck out in the bottom of the sixth, not long after having met with Sal Durante, who had been brought down to the locker room to meet the new record-holder. Durante sought to give Maris the ball, and the slugging outfielder was deeply touched by the generous offer. However, Maris was also fully aware that San Francisco restaurateur Sam Gordon had announced a $5000 reward for the record-breaking ball, and so he refused, telling the 19-year-old Durante to keep it and “make yourself some money.”1

Then, in the bottom of the eighth, Maris made the last out of the Yankees’ regular-season when, facing the Red Sox’ Chet Nichols, who had relieved Stallard after the seventh inning, he popped to second. Closer Luis Arroyo, who had come on in the eighth, dispatched the Red Sox in the top of the ninth, giving up one single, and the Yankees, having finishing the regular season with 109 wins, looked ahead to the World Series, which would open at Yankee Stadium on Wednesday.

In many ways the game typified Maris’s season. Through all the turmoil the shy slugger always had the unstinting support of his teammates, who watched in awe as the 27-year-old player dealt with unprecedented amounts of pressure and attention. And in turn, he had always been most concerned about helping his teammates win. Indeed, almost lost amid the fanfare was the fact that the 61st home run represented not only Maris’s league-leading 142nd run batted in, but the only run in the game, indeed, the winning run, in the Yankees’ 109th victory.2 In the end, that was what Roger Maris – a man whose career saw him play important roles on seven league championship teams and three World Series winners – was always about.

I was in attendance at the game as my father, recognizing that we might see history, decided that morning to take 7-year-old me and my 5-year-old brother to Yankee Stadium. The second major-league game of my life, and my brother’s first, it remains one of my most cherished memories.

2 Research begun in 1995 and validated in 2010, discovered that Maris has been credited with an additional, unearned RBI during the 1961 season resulting in his original total of 142. With the subtraction of that extra run, Maris ended up tied with Orioles first baseman Jim Gentile with 141. The same research effort determined that Mickey Mantle had been credited with an extra run scored and when that correction adjustment was made Maris, who had been tied with his Yankee teammate emerged the runs scored leader. See Jim McLennan, “Roger Maris Loses 1961 RBI Crown, Wins Runs Scored Title,” SB Nation.