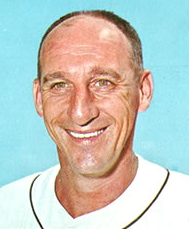 When the San Francisco Giants took the field at Candlestick Park on Friday, October 1, 1965, their season was hanging in the balance, and precariously so. The Giants trailed the first-place Los Angeles Dodgers by two games with only three games left in the season.

Just a week and a half before, on September 20, the Giants had enjoyed a four-game advantage over their Southern California rivals, and had announced that pre-orders for World Series tickets were sold out.1 Now, it would seem, the best they could realistically hope for would be a first-place tie and a playoff.

The Giants entrusted the pitching chores this evening to 26-year-old Bobby Bolin, the hottest pitcher on their staff.  In just the past three weeks, Bolin had won five games and saved another, bringing his won-lost record to a nifty 13-5.

Taking the hill for the visiting Cincinnati Reds was 24-year-old Sammy Ellis, one of two Reds bullpen phenoms of 1964, who, along with 19-year-old Billy McCool, had nearly helped bring cancer-stricken manager Fred Hutchinson a pennant in the last season of his life. In 1965 Ellis earned a spot in the Reds’ starting rotation and had exceeded all expectations. He’d been selected as an All-Star and came into the game with a 21-10 record.

There was no shortage of stars on display in the starting lineups. The Reds had outfielders Frank Robinson and Vada Pinson (who had both attended Oakland’s McClymonds High School, just across the bay from Candlestick), as well as budding second baseman Pete Rose, enjoying the first of what would be many 200-hit seasons.  For the Giants there were, of course, Willie Mays (en route to his second MVP award), third baseman Jim Ray Hart, and first baseman Willie McCovey, who had rebounded nicely from a disappointing 1964 campaign. Orlando Cepeda, injured for most of the 1965 season, was on hand for pinch-hit duty.

The crowd barely had a chance to take their seats before the Reds jumped out to a 4-0 lead. Singles by Rose and Pinson (sandwiching an Art Shamsky strikeout), were followed by back-to-back home runs by Robinson and Gordy Coleman.

That was enough to end Bolin’s evening as Giants manager Herman Franks signaled to the bullpen for Masanori Murakami, who as a September call-up in 1964 had become the first Japanese player to appear in a U.S. major-league game. In 1965, he’d made the second most relief appearances on the staff and had performed well. Due to contractual obligations, Murakami would be heading back to Japan for the 1966 season, so he may have realized this might be his last trek to the mound for San Francisco.

Murakami got through the rest of the first inning unscathed. In the second, after a leadoff single by Ellis, Rose launched a home run over Candlestick Park’s chain-link centerfield fence. A Pinson double chased Murakami, thus ending his major-league career. After an inning-and-a-half, the Giants trailed 6-0.

Catcher Tom Haller homered in the bottom of the second, putting the Giants on the scoreboard, but the Reds made it 7-1 in their next turn at bat.

At this point, fans with transistor radios might’ve been looking to Giants broadcasters Russ Hodges and Lon Simmons for an update on the Dodgers-Milwaukee Braves contest at Dodger Stadium. The way things were breaking in San Francisco, the Giants would need a Dodgers loss to keep the season alive.  Even with that, the Dodgers would clinch at least a tie.

In the fourth inning, the Giants staged a two-out rally with their “Murderer’s Row” of Len Gabrielson (single), Hal Lanier (single), Bob Burda (walk), and Jim Davenport (walk), netting them a run. Jesus Alou flied out to Frank Robinson to end the threat.  As a historical aside, this inning might be considered emblematic of why a team with Mays, McCovey, Hart, Juan Marichal, and Gaylord Perry didn’t win more pennants … a lackluster supporting cast year in and year out.

The game remained 7-2 through six innings.  In the seventh, the Reds blew the game wide open, and did so against two future Hall of Fame pitchers.

Gaylord Perry took the mound for the Giants to start the frame. Perry, struggling all year after a fine 1964 (he would bloom into a star in 1966, and the rest is history), was greeted with three consecutive singles, plating two more runs for Cincinnati. With two on, none out, and the score now 9-2, Franks called on 44-year-old Warren Spahn, who, it turned out, would be making the final appearance of his remarkable career.

Spahn had started the season with the New York Mets, but was released in mid-July, struggling with a 4-12 record and a 4.36 ERA. The Giants signed him days later, and he’d been moderately effective as a stopgap starter during the dog days of August.  On September 12 Spahn had earned his 363rd – and final – career victory by going the distance against the Chicago Cubs at Candlestick Park.

Spahn had created a bit of a stir after the Giants’ September 20 victory over the Reds, which gave San Francisco the aforementioned four-game lead with just 12 games to play. After that win, manager Franks flatly stated, “Five more wins should do it for us,”2 and Willie Mays echoed, “I think five more victories will do.”3 Spahn, planting his high-kicking right foot firmly in his mouth, went a step further. “They’ll never catch us now. We’ve got the momentum. I wouldn’t be surprised if we swept all three games from Cincinnati now.”4

The Giants certainly did have momentum, having at that point won 17 of their last 18 games, which included a 14-game winning streak.  What Franks, Mays, and Spahn could not know, however, is that the Giants’ momentum would come to an abrupt halt, and that the Dodgers were four games into a 13-game winning streak of their own.  Rather than sweep the Reds, San Francisco dropped the remaining two games at Crosley Field, and stumbled their way to the end of the season. The Giants would win the five games Franks and Mays thought sufficient, but would still come up two games short of even a tie for the flag.

Spahn’s last outing was not something to remember as he faced just three batters. Following a walk, an error (resulting in a run and an out), and a single, he was replaced by youngster Bill Hands, a future 20-game winner for the Chicago Cubs. At the seventh inning stretch, it was 11-2 Cincinnati.

It would’ve been about the time Spahn was on the mound that the shell-shocked Giants would learn the Dodgers-Braves game had ended. Milwaukee’s Denny Lemaster had blanked Los Angeles, 2-0, so a season-ending tie and playoff were still a remote possibility.

That may have been small solace as the flood of Reds crossing home plate continued through the eighth and ninth innings.  Cincinnati parlayed five singles, a walk, a double, and a Deron Johnson home run into six more runs. Final score: 17-2. The Giants perhaps regretted denying the Reds’ request to take extra batting practice before the game. Said Reds manager Dick Sisler in the winners’ locker room, “You know how players are. They kept taunting the Giants throughout the game, saying, ‘We’re getting our batting practice now.’”5

The defeat the Giants experienced was their worst since they moved west in 1958.  It was the most runs (17) and hits (21) they’d ever yielded on their home turf, and the 15-run margin of defeat was their largest, regardless of venue.6

Remarkably, the Giants rebounded from the shellacking to win their final two games, but so did the Dodgers, who, by winning 15 of their last 16 games, “momentum-ed” themselves right into the pennant and a subsequent World Series victory over the Minnesota Twins.

Two weeks later, on October 15, Spahn was released by the Giants. Feeling strongly that his left arm still had something to offer, he hoped to pitch in 1966 but found no takers. As a courtesy, the Giants extend him an invitation to spring training, with no guarantee of a roster spot.7 A humbled Spahn chose not to take them up on the offer.

As expected, Murakami returned to Japan after the 1965 season. Lines of communication with San Francisco remained open and there were rumors of “Mashi” returning to the Giants through the remainder of the decade, but nothing came to fruition.8 Murakami pitched in the Japan Pacific League until 1982.

This was the first night game I ever attended, at age 8.