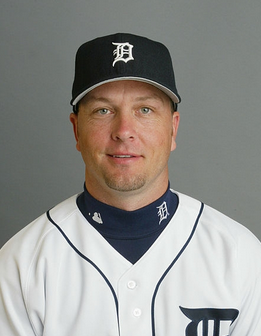 Late-season games involving two teams out of playoff contention don’t often generate much excitement outside the clubs’ most ardent supporters. Although the Detroit Tigers and Minnesota Twins — both sub-.500 teams — headed into a meaningless season-finale tilt on October 1, 2000, this time fans were in for a rare treat. The 28,293 in attendance that afternoon at Detroit’s Comerica Park saw Tigers utilityman Shane Halter play all nine positions, becoming the fourth major-leaguer to accomplish the feat, behind Bert Campaneris, César Tovar, and Scott Sheldon.

Tigers manager Phil Garner hatched the idea earlier in the season, and Halter was enthusiastic about the possibility. “I’m excited about it. It would be a neat thing to tell the grandchildren,” he said.1 “If we get into a position where a game’s either out of hand or not critical, I’m going to do it,” Garner declared in a September interview.2 At the time, the club was still battling for an American League wild-card berth, but as Detroit eventually fell out of contention, the door opened on the possibility. The Tigers skipper decided to pull the trigger in the season finale against the Twins; the contest held no playoff implications for either club. Before the game Garner actually considered starting Halter at designated hitter before moving him around the field to make him the first player to play 10 positions in a game. This idea was abandoned, however, because of the possibility of lineup difficulties occurring as the game progressed.3

While the game itself began rather uneventfully with both teams scoreless after two innings, Halter saw action in the field in both frames. He began the game at first base, picking up an assist in an inning-ending groundout off the bat of cleanup hitter David Ortiz. After moving to third base in the second inning, Halter collected another assist on a Torii Hunter groundout.

Minnesota drew first blood in the top of the third inning on Denny Hocking’s RBI double. The Twins threatened to add to their lead with two men on and one out, but Tigers starting pitcher Brian Moehler was able to escape further damage. Halter had moved to right field at the beginning of the frame, but did not see any chances. He did have his first chance to hit in the bottom of the third, however, and delivered, with a single to left field off Minnesota starting pitcher J.C. Romero. After Damion Easley’s RBI groundout, Juan Encarnacion singled Halter home to give the Tigers a 2-1 lead.

With Halter shifting to center field to begin the fourth inning, Moehler flirted with trouble by allowing consecutive singles to the first two batters. A timely double play and fly out to Halter kept the Twins at bay, however. Similarly, Romero allowed consecutive singles to open the top of the fourth, but also used a timely double play (off the bat of Halter) to hold Detroit to its one-run lead.

Scoring began in earnest in the fifth inning, and did not let up for the rest of what became a wild and woolly game. The Twins regained the lead in the top of the inning after picking up two runs on back-to-back RBI doubles from Corey Koskie and Hunter. Detroit bounced back with a vengeance in the bottom half of the frame, knocking Twins starter Romero out of the game while scoring six runs in the process. Halter, who had moved to left field in the top of the fifth, was responsible for driving in two of the runs on a single to center field. The other four runs came courtesy of a two-run double by Bobby Higginson and RBI singles by Dean Palmer and Wendell Magee. When the dust settled on the frenetic fifth frame, the Tigers had an 8-3 lead.

The lead was short-lived, however. Manager Garner called on the bullpen to relieve Moehler to begin the top of the sixth. This decision ultimately proved costly, as relievers Adam Bernero and C.J. Nitkowski were unable to contain the Twins’ bats. Hocking got the scoring started for the Twins with a bases-loaded walk. Two batters later, Casey Blake drove in the second run of the inning with a sacrifice fly. A critical two-out error by Tigers third baseman Palmer with Hunter at the plate allowed the third run of the frame. The error was particularly costly, as Doug Mientkiewicz immediately followed by capping the Twins’ scoring with a two-run single to tie the game at 8-8. Halter spent the inning at the shortstop position, and picked up the inning-ending assist on a groundout by Matt LeCroy. After Minnesota’s offensive flurry in the top half of the frame, Detroit went out quietly in the bottom half, unable to muster much against Twins reliever Travis Miller.

With Halter now taking over behind the plate to begin the top of the seventh inning, the Tigers’ bullpen again struggled. Brian Buchanan started the damage for Minnesota with a two-out, two-run single, followed by an RBI single by Hunter to give the Twins an 11-8 lead. Detroit chipped away at the deficit in the bottom of the inning, getting one run back on an RBI single by Halter.

With the Tigers now down 11-9, Halter was called upon to take the mound for Detroit. Facing LeCroy to start the top of the eighth inning, he delivered a first-pitch strike, but followed that with four straight balls. After walking LeCroy, Garner had seen enough of his ersatz bullpen arm, and gave him a quick hook — much to the chagrin of fans who had been cheering him on.4 “He stunk. Couldn’t throw strikes. No movement. Although he did get ahead of one hitter,” Tigers pitching coach Dan Warthen later quipped of Halter’s brief pitching performance.5 And Halter himself later admitted that he “definitely spiked some pitches” in the dirt.6 Despite a less than stellar mound appearance, Halter nonetheless shifted to second base for the rest of the inning — thereby completing his historic quest to play in all nine positions during the game. Reliever Matt Anderson took over on the mound and quickly shut Minnesota down on a popout and double play (started by Halter), to maintain Detroit’s deficit at two runs. The Tigers continued to chip away at the Twins’ lead in the bottom of the eighth. Rod Lindsey got things started for Detroit with a double (his first and only major-league hit), knocking Twins reliever Bob Wells from the game. Higginson greeted reliever Eddie Guardado with a single, driving in Lindsey to close the gap to 11-10, where the score remained heading into the ninth inning.

With Halter continuing his duties at second base, Anderson and Tigers closer Todd Jones combined to shut the door on the Twins in the top of the ninth. Detroit — down to its final opportunity at the plate — struck quickly. Dusty Allen — in what became his final major-league at-bat — led off the bottom of the ninth with a game-tying home run off Guardado. Halter followed with a double off the left-field wall, and moved to third on a single by pinch-hitter Billy McMillon. Seeking to stem the tide and force extra innings, Minnesota replaced the struggling Guardado with reliever Danny Mota. Mota, however, was greeted with a single to left by pinch-hitter Hal Morris, scoring Halter to give the Tigers a 12-11 walk-off victory. In an interesting twist of fate, the final pitcher-vs.-batter battle of the game between Mota and Morris also resulted in their final big-league appearances.

Scoring the game-winning run capped a day that Halter termed “magical.”7 In addition to becoming only the fourth major leaguer ever to play all nine positions in a game, he went 4-for-5 at the plate with three RBIs and two runs scored. Defensively, Halter touched the ball at every position except right field, and handled all five of his chances without an error. Garner called the game the “most fun” he ever managed.8 “I don’t ever want to make a travesty of the game on my watch, but I don’t think this did,” the Tigers skipper said. “I could tell that the fans were really getting into it from about the third inning on.”9

Not everyone viewed the game favorably, however. “It was an ugly game,” Twins manager Tom Kelly said of the 3-hour 59-minute contest, in which an AL record-tying total of 42 players were used.10 And Halter had to deal with detractors who sought to discredit his accomplishment. “I’ve really had some people kind of bashing that game, and it really just burns my ass when they do it,” Halter later said. “There’s nothing I can say to make myself let somebody know what kind of excitement I had for that game. Because I worked my butt off to learn all those positions and learn how to do those things. I spent two years going to an instruction league to catch. I learned first base basically just going over and taking groundballs and listening to a few people on how to play it.”11 Indeed, Halter had already played all positions except pitcher earlier in the 2000 season, and displayed positional versatility in his previous three big-league campaigns — including pitching in a 1998 game while he was a member of the Kansas City Royals. Despite the naysayers, when asked if he would be willing to replicate his feat, Halter replied, “I’d love to do it again. I’d love to play 10 (positions).”12

In addition to the sources cited in the Notes, the author accessed Baseball-Reference.com; Chronicling America; GenealogyBank.com; NewspaperArchive.com; Newspapers.com; and Retrosheet.org.