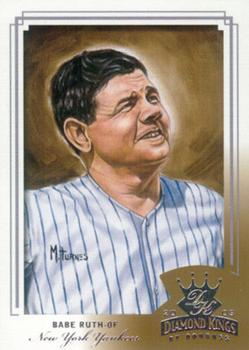 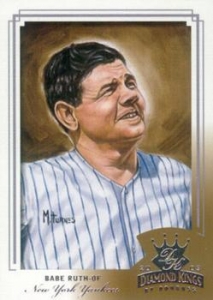 In 1921, for the first time in the brief history of the modern World Series, all the games were played at one venue, in this case the Polo Grounds in New York.1 The same two teams played in the World Series in 1922, again with all the games at the Polo Grounds. The same two teams squared off for a third year in a row in 1923, but by then the Yankees had their own ballpark, Yankee Stadium. The third and final time the World Series was played in one ballpark was in 1944 when the St. Louis Browns met the St. Louis Cardinals; all six games were played at Sportsman’s Park.

After the Giants’ 4-2 victory in Game Four, the best-of-nine 1921 Series was tied at two games apiece. The Giants were the home team for Game Five. Yankees manager Miller Huggins named Waite Hoyt as his starter. Giants manager John McGraw selected left-hander Art Nehf to pitch; Nehf had lost Game Two 3-0 to Hoyt, who had pitched a two-hit shutout. Carl Mays had shut out the Giants in Game One by the same 3-0 score.

The Giants had come back strongly, however, with a 13-5 victory in Game Three and a 4-2 win in Game Four. The bleachers were filled (attendance was 35,758) long before umpire Cy Rigler yelled for them to play ball.2 The back-to-back wins in the prior two games had dampened the enthusiasm of Yankees fans.3

As for Yankees star Babe Ruth, he was nursing a cut on his throwing arm that had become infected.4 In the two games after the injury, he had gone 3-for-7, including a ninth-inning home run in Game Four that gave the Yankees their final run in the 4-2 loss to the Giants. Ruth had a great 1921 season, perhaps one of the greatest of all time. He hit 59 home runs, scored 177 runs, had 168 runs batted in, and walked 145 times, all American League-leading figures. Ruth also led the league in on-base percentage (.512) and slugging percentage (.846) while hitting for a .378 average, third best in the league behind Harry Heilmann (.394) and Ty Cobb (.389).

In the top of the first inning Ruth was Nehf’s first strikeout victim and the final out of the inning. The Giants scored a run in the bottom of the first after an error by shortstop Roger Peckinpaugh that allowed George Burns to reach base safely. Frankie Frisch singled and Ross Youngs walked to load the bases and George “High Pockets” Kelly singled in Burns with the game’s first run. The Yankees scored once in the top of the third to tie the game.

Ruth led off the top of the fourth inning but crossed up the entire Giants infield with a bunt down the third-base line, and while the play was close at first base, umpire George Moriarty ruled that Ruth had beaten the throw from Nehf.5

Grantland Rice wrote: “Right fielder Bob Meusel then laced a double to left-center field which sent Ruth scurrying around the bases. Few in attendance expected Ruth to reach third base, but with a new burst of speed he rounded third base and sped towards the plate like a pachyderm running on greyhound legs.”6

The Babe scored. Wally Pipp grounded out to second baseman Johnny Rawlings for the first out of the inning. Yankee second sacker Aaron Ward flied out to George Burns in center field and Meusel beat the throw from Burns to Earl Smith for the Yankees’ second run of the inning and third run of the game. Burns made a fancy catch of Mike McNally’s fly ball to prevent any more scoring.7

Ruth’s burst of speed was nearly his undoing. He got to the bench and was near collapse as his teammates began to try to get him well enough to keep playing. The game was held up for several minutes until Ruth was finally ready to return to his position in left field; his shaky walk to left field cast some doubts as to his condition.8

Hoyt retired the Giants easily in the bottom of the fourth inning after issuing a walk to leadoff batter Earl Smith. Smith was caught stealing and Hoyt then struck out Nehf and Burns. For the rest of the game Hoyt allowed just four more hits, a sixth-inning single by High Pockets Kelly, singles by Ross Youngs and Kelly in the bottom of the eighth, and a leadoff double by Rawlings in the ninth. Hoyt then bore done, getting Earl Smith to pop out and striking out Frank Snyder and Burns to end the game.

From the fifth inning on, Nehf was just as good as Hoyt, allowing just a fifth-inning double to Elmer Miller and an eighth-inning single by Roger Peckinpaugh. But after the fourth there was no more scoring by either team and the Yankees were 3-1 winners and now had a three-games-to-two advantage. Hoyt got the win.

The Yankees’ winning and taking the Series lead was not the big story. Nor was the big story Babe Ruth’s bunt in the fourth inning the big story. Monday night after the game, Dr. George King, the Babe’s personal physician, conducted a physical of the Yankee slugger at the Ruths’ residence in the Hotel Ansonia.9

King reported that he had ordered Ruth not to play the next day. He said, “Ruth’s injured arm is in such condition that he would be taking chances of further injury, possibly of a serious nature if he were to take part in tomorrow’s contest.”10 Sportswriters asked King whether his order would be extended should the Series go the full nine games.11 He responded, “It is possible that the injury may take a turn for the better sooner than expected or that the Series will be strung out for a time. In either event Ruth might be able to get into the game before it is over. But as things stand tonight his chances of playing are none too bright.”12

The Yankees and their fans had to wait nervously to see if the Babe would be available for any more games in the Series. Ruth was unable to play in either Game Six or Game Seven, both of which were won by the Giants, 8-5 and 2-1 respectively. With the Giants then holding a four-games-to-three edge, a Giants win in Game Eight would clinch the Series for them.

The Yankees had lost Game Seven by just the one run. The absence of the American League RBI champion hurt them at the plate. Game Eight was another Nehf vs. Hoyt matchup. The Giants scored a unearned run in the top of the first. It was the only run scored for the first eight innings. In the bottom of the ninth, with the Yankees still down 1-0, Ruth led off, pinch-hitting for Wally Pipp. He grounded out to first base unassisted. Aaron Ward walked, but Home Run Baker hit into a double play and the Giants won the 1921 World Series.