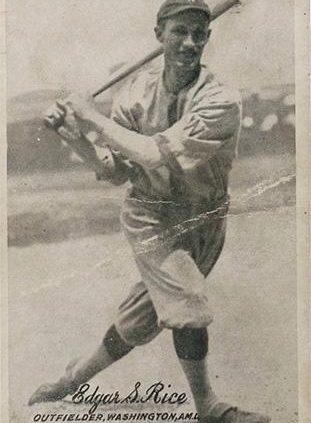 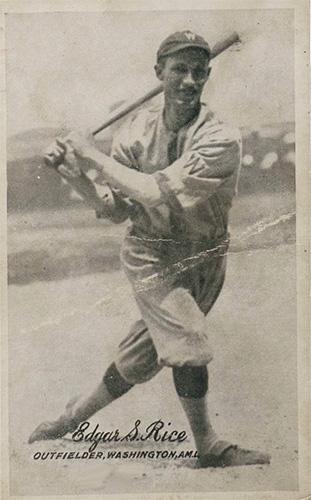 The play sparked immediate controversy and remains one of the enduring questions in World Series history. Did Sam Rice catch Earl Smith’s deep fly while falling into the stands to preserve the Washington Senators’ 4-3 victory in Game Three of the 1925 World Series? Sportswriter Chester L. Smith described Rice’s feat as “one of the historic puzzles of sportdom,”1 while his colleague Charles J. Doyle at the Pittsburgh Gazette Times considered it “either good acting or the real thing”2 and Edward F. Balinger of the Pittsburgh Post dismissed it as “one of the most doubtful affairs ever witnessed.”3

After splitting the first two games of the fall classic in Pittsburgh, the reigning World Series champion Senators returned to the nation’s capital. On a Saturday afternoon with temperatures in the high 30s, “wintery zephyrs wheezing,”4 and a field that “was swept by hurricane blasts that chilled to the marrow,”5 Griffith Stadium was packed with 36,495 spectators. The huddled masses in heavy coats and blankets, according to Ralph S. Davis of the Pittsburgh Press, looked like a “cross between a baseball mob, a football gathering and an assemblage witnessing a boat race.”6 President Calvin Coolidge, who had hosted the Pirates at the White House earlier that day, threw out the ceremonial first pitch, after which a band played the “Star Spangled Banner” and then a bugler performed a rendition of “Taps” in honor of icon Christy Mathewson, who had died three days earlier, before the flag was lowered to half-staff.7

Player-manager Bucky Harris sent Alex Ferguson to the mound, a choice many pundits found perplexing. The 28-year-old right-hander, acquired in mid-August from the New York Yankees, was playing for his third team in ’25 and went 5-1 down the stretch for the Nationals, with a cumulative record of 9-5 but an unsightly 6.18 ERA. He walked Eddie Moore to lead off the game and then plunked Max Carey to put himself in a hole that was eventually remedied when Clyde Barnhart hit into an inning-ending double play. Pie Traynor led off the second with a liner just out of reach of right fielder Joe Harris’s shoestring attempt, according to Ballinger, and the ball rolled to the fence; Traynor was credited with a triple.8 He scored on Glenn Wright’s sacrifice fly to give the Bucs a 1-0 lead.

The Pirates seemed to have an advantage on the hill with their dependable starter, 32-year-old right-hander Ray Kremer, who had posted a 17-8 slate in the regular season. Their defense, however, looked shoddy in the early rounds, committing an error in each of the first three frames. Rice collected the Senators’ first hit, leading off the third with a single, and then scored the tying run on Joe Judge’s two-out double. A heads-up play by first baseman George Grantham saved a potential run, according to Davis, when he retrieved shortstop Wright’s errant throw on Joe Harris’s grounder and threw home to nab Judge, who was attempting to score on the miscue.9

Ferguson was once again on the ropes in the fourth, when Kiki Cuyler, coming off a phenomenal season, batting .357 and leading the majors with 144 runs scored and 26 triples, led off with a double to deep left-center field that looked as though it would bound over the wall for a home run, but Rice chased the ball down to save a run [According to pre-1931 rules, balls that traveled 250 feet and then bounced into the stands were credited as home runs, not ground-rule doubles].10 Barnhart grounded through the shortstop hole and left fielder Goose Goslin fired a running throw home, but Cuyler slid under Muddy Ruel’s tag while Barnhart moved to second. Traynor followed with a walk, and it looked as if the Pirates might blow it open. But after two infield outs and an intentional walk to Smith to load the bases, Kremer fanned to end the threat.11

While Kremer “was brilliant in the early innings,” mused Doyle, the high-flying Pirates, who had led the majors with an average of 6.0 runs per game, threatened again in the sixth.12 On first via shortstop Roger Peckinpaugh’s throwing error, Wright scampered to third on Smith’s two-out single, just evading Buddy Myer’s sweeping tag on a bullet from Joe Harris. Kremer hit what seemed to be a routine inning-ending grounder, but the ball made an awkward bounce out of reach of second baseman Harris and into center field, scoring Wright. After Moore walked to fill the bases for the second time in three innings, catalyst Carey, who had batted .343 and led the NL in stolen bases for the 10th time in the last 13 seasons, fanned swinging.

With the Bucs seemingly in control of the game, yet holding a precarious 3-1 lead, the atmosphere was tense at Griffith Stadium, and it became even more edgy when Goslin, one of the heroes of the Senators ’24 title team, led off the sixth by hitting a line drive “on the bound” into the center-field bleachers for a home run.13

After Ferguson set down the Pirates in order in the seventh, strategic decisions by Harris led to a two-inning stretch described by Harry Cross of the New York Times as “an exhibition of nerve and wonderful spirit.”14 Little used Nemo Leibold, pinch-hitting for Ferguson, drew a walk on four pitches and was replaced by pinch-runner Earl McNeely. Two batters later, the 28-year-old player-manager himself bunted a lazy roller down the third-base line. Catcher Smith “followed the ball, waiting for it to roll into foul territory,” reported Cross, but was “too impatient” or too nervous, picked it up before it crossed the line and threw late to first.15 Surprising the Pirates and none more than Pie Traynor, considered the premier third sacker in the NL, the team’s most dangerous slugger Goslin bunted to third to load the bases. After Judge’s fly ball tied the game, Joe Harris singled to plate his skipper and give the Senators a 4-3 lead.

Bucky Harris’s decisions in the field proved as important as those at the plate. In the bottom of the pivotal eighth inning, Rice moved from center field to right, replacing Judge, whose “stout legs all knotted with muscle carry no speed,” opined sportswriter Damon Runyon,16 while McNeely took over center field. To the mound came right-handed Firpo Marberry, whom Mark Armour described in his SABR biography as “the first great hurler to be used primarily as a reliever.”17 Marberry fanned Wright and Grantham, then Smith connected on a hard-hit blast to right field. Playing back, “Rice and the ball reached the bleachers rail at the same instant,” reported Chester L. Smith. “Sam leaned far into the crowd, with his back to the infield, and, almost hidden from the views of the grandstand.”18 According to Balinger, Rice jumped “into the air and toppled partly over a small fence in front of a low tier of circus seats.”19 By the time Rice got up with the ball in tow, Smith was rounding third, and veteran NL umpire Cy Rigler, signaled a catch, despite manning second base approximately 250 feet away from the action.20 It was an “astounding, one-handed catch,” exclaimed Runyon.21 Pirates players, led by skipper Bill McKechnie, had a different view and poured out of the dugout in protest as the scene teetered on the verge of a melee. Generally soft-spoken, an enraged McKechnie subsequently went to the box seat occupied by Commissioner Kenesaw Landis and stated that he would lodge a formal protest if the Pirates lost. Landis rejected any protest, declaring the catch the umpire’s call.

In the mist of the confusion surrounding Rigler’s call, another peculiar scene took place in the bottom of the frame. After Ruel singled, Marberry laid down a sacrifice bunt; however, he should have been out because he batted out of turn, but no one noticed the error.22 Rice grounded to short to make the point moot.

Rice’s catch is the most memorable play of the game, but the Pirates’ inability to collect a clutch hit with men in scoring position was the reason for their loss. In the nail-biting ninth inning, the Pirates loaded the bases with one out on singles by Moore and Carey and Cuyler’s hit by pitch. Needing just an outfield fly to tie the game, cleanup hitter Barnhart, who batted .325 and knocked in 114 during the regular season, popped up to the catcher. Traynor, whose exploits at the plate (batting .320 with 106 RBIs) almost matched his defensive prowess, drew three consecutive balls, leading Bucky Harris to walk from second to the mound to confer with Marberry. Waiting for his pitch, Traynor took two called strikes before launching a routine popup to McNeely to end the game in 2 hours and 10 minutes and give the Senators a two-games-to-one lead in the Series.

“The Senators won today’s game because they were smarter than the dangerous Pirates,” opined Cross.23 Harris’s decisions late in the game proved to be pivotal, while the Pirates lacked punch in the crunch, going 2-for-12 with runners in scoring position and leaving 11 men on base, including three times with bases loaded.

After the game, at least two men gave affidavits that a boy handed the ball to Rice; however, those sworn testimonies didn’t lead to a reversal of Rigler’s call.24 According to Davis, McKechnie intended to file an official protest, but Pirates owner Barney Dreyfuss did not allow it.25 Rice himself gave two statements about the play to reporters, one claiming that he had caught the ball and the other stating that he had “momentarily” caught the ball before a fan grabbed it from him.26 A catch, or no-catch, Rice’s play became part of World Series lore.

11 The first of those outs was a bang-bang play. According to Doyle, first baseman Joe Judge’s “brilliance” saved a potential run when he saved a bad throw from shortstop Roger Peckinpaugh on Glenn Wright’s grounder. “It was apparent to all that he was safe,” mused Davis. “Johnson and Yde Slated to Pitch.”

22 McNally should have batted in the ninth spot because he was the pinch-runner for Leibold, who had pinch-hit for the pitcher; Marberry was in Joe Harris’s batting position.