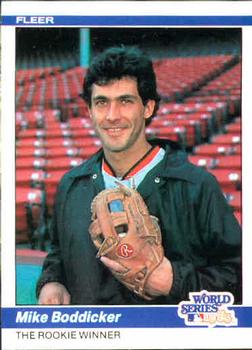 Desperately needing a win, the Orioles entered Memorial Stadium in downtown Baltimore for Game Two of the 1983 World Series. They had lost Game One the previous day and were aware that no team had recovered to win the Series after losing the first two games at home. The Orioles’ Mike Boddicker had fashioned a fine rookie season, winning 16 games as a regular starter after his recall in May from Triple-A Rochester. The team was hoping for a repeat performance of Game Two of the American League Championship Series, when Boddicker led the team back from a one-game hole with a shutout of the Chicago White Sox.

Opposing the Orioles were their neighbors to the north, the Philadelphia Phillies. They were a veteran team nicknamed the Wheeze Kids for their abundance of older players.1 After firing manager Pat Corrales in July, general manager Paul Owens left the front office to run the team. He was tasked to lead this veteran team to their second title in four years. Former Big Red Machine teammates Tony Perez and Joe Morgan were united with Pete Rose, leading many people to think this was the one opportunity for a title with this group.

The game was a matchup of rookie pitchers. Charles Hudson, the Phillies’ rookie starter promoted from Triple-A Portland in May, was matching zeros with Boddicker. The pitchers dominated the first three innings. The only offense had been a one-out double by Baltimore’s John Lowenstein in the bottom of the second. After the game, Lowenstein predicted, “In this Series, I think it’s going to be an oddity to score a lot of runs. You have to feel proud to contribute any offense with the kind of pitching we’re going to see in this Series.”2

The Phillies generated their only offense off Boddicker in the top of the fourth. Morgan led off by grounding a ball to deep shortstop for an infield single. Pete Rose squared to bunt, but on Hudson’s first pitch to him, Morgan stole second, beating a perfect throw from catcher Rick Dempsey. Still bunting, Rose failed to advance Morgan to third as Dempsey quickly gobbled it up and threw Rose out at first. Mike Schmidt was due up next, looking for his first hit in the Series. Schmidt had confidence in his swing despite his lack of success. “To be honest with you, I can’t swing the bat any better than I’m swinging,” he said before the game.3 “You’re going to hear from me.” Getting wood on the ball, Schmidt hit a grounder to short. Cal Ripken fielded it cleanly but Eddie Murray dropped his throw, allowing Schmidt to reach first and Morgan to move to third. Morgan scored on a fly to deep center off the bat of Joe Lefebvre and the Phillies led, 1-0.

Despite that breakthrough, the pitchers were still in control. Phillies pitching coach Claude Osteen was impressed with his pitcher after Hudson finished the fourth. “I felt really good,” Osteen said. “I particularly liked the way he pitched after we scored. He really went out and popped the ball that inning.”4 Boddicker was making an impression on the Phillies. Rose said, “He’s got a great idea of what he’s doing.”5 Phillies manager Owens said, “We’re very impressed by him.”6

The Orioles came to bat in the bottom of the fifth looking to solve Hudson. The star batters were hitless as the team had been held to just Lowenstein’s double. Designated hitter Ken Singleton was not in the lineup; the DH was not used in the World Series in this odd-numbered year.7 The bottom of the order, Rich Dauer, Todd Cruz, and Dempsey, all better known for their defense, would need to take up the slack. Singleton had playfully dubbed them “The Three Stooges” earlier in the year.8 Reluctantly accepting the moniker, the members of the trio were determined to prove Singleton wrong.

Leading off the fifth, Lowenstein worked the count to 2-and-0 and when Hudson missed location on the next fastball, Lowenstein didn’t miss it. His long home run to dead center tied the score and spotlighted the “Stooges.” Asked about the label after the game, Dauer and Dempsey spoke out. “All you hear about is the bottom of the order is making us lose,” Dauer complained.9 Dempsey said, “[It] seems like everyone was talking about the bottom of the order before tonight. It can get to you.”10

After Lowenstein’s smash, Dauer, hitless in the postseason so far, lined a 1-and-2 pitch into left field for a base hit. Cruz bunted down the third-base line. Schmidt fielded the ball but had to hold it, because no one was covering first. Cruz, by waiting to square for the bunt until the last second, had forced Morgan to stay closer to second base. With Rose charging from first, neither fielder could get to the bag fast enough to receive the throw from Schmidt.

With runners on first and second, Dempsey stepped to the plate. If the DH had been in use, Dempsey would probably have bunted, but with the pitcher batting next, he was hitting away. Hudson misplaced another fastball and Dempsey stroked it down the right-field line for a double, driving in the go-ahead run. Boddicker hit a sacrifice fly to left, scoring Cruz with the third run and sending Hudson to the showers. Willie Hernandez replaced him and, despite putting two more runners on base, retired the side with no more scoring.

While the Phillies were able to manage only two more singles, the Orioles tacked on another run in the bottom of the seventh. After Larry Andersen, who replaced Hernandez, struck out Dempsey and induced a groundout from Boddicker, the top of the order took their turn at producing offense. John Shelby beat out an infield single. Still in the game after getting beaned by a Hernandez pitch in the fifth, Dan Ford stroked a single to right. Ripken’s single to right, which barely avoided hitting Ford, scored Shelby with the final run of the game. Boddicker finished his complete-game victory, facing 30 batters and allowing only the unearned run in the fourth.

Losing pitcher Hudson, meanwhile, said when asked whether he had been nervous pitching in a big game, “Butterflies? Nah, I didn’t have no butterflies. Why should I be scared? It’s only a ballgame.”11

“I guess you have to say we’re satisfied to get a split on the road,” said Owens.12 The optimistic statement overshadowed his team’s lack of offense. Schmidt was the only Phillies player with more than 64 RBIs during the season and the Phillies had scored only three runs in splitting the first two games of the Series. The Orioles’ outburst in the fifth was the only inning in the first two games with more than one run scored by either team. Wrote Peter Pascarelli of the Philadelphia Inquirer, “This has the appearance of being a World Series in which bats are held hostage.”13 With an offday scheduled, both teams headed to Philadelphia hoping that the star bats would awaken and propel them to victory.

In addition to the sources cited in the Notes, the author consulted the play-by-play information included with the box scores of this game at the Baseball-Reference.com and Retrosheet.org websites: