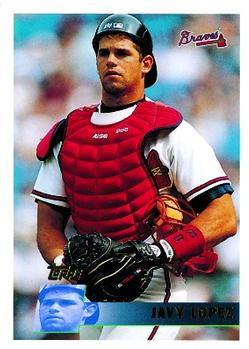 It all began with a Dennis Eckersley fist pump.

When the St. Louis Cardinals closer struck out Marquis Grissom with the tying run on second base to end Game Four of the 1996 National League Championship Series, he wound up his right arm and unleashed his trademark celebration on the mound, then stomped around the infield yelling and giving high-fives to his teammates. The Cardinals had just taken a 3-1 lead in the series and a trip to the World Series looked inevitable. No team had ever come back from that deficit in the NLCS before.

Over in the Atlanta Braves dugout, an injured David Justice watched Eckersley’s histrionics on the field and delivered a livid message to his teammates afterward: “Did y’all see that right there? They’re over there putting nails in [our] coffins right now. … They ain’t scoring another [expletive] run this whole series.”1

Third baseman Chipper Jones, in his second big-league season, was also fuming and he was glad the veteran Justice spoke up. “Our team walked out of the clubhouse that night almost like we had just won the game. We were so fired up to get to the park the next day,” he said. “We didn’t want Dennis Eckersley to take the mound for the rest of the series.”2

Over the next three games, the reigning world champion Braves – led by a refocused offense and their three Cy Young Award winners – reasserted their dominance. They roared back to outscore the Cardinals 32-1 and clinch the National League pennant. Eckersley’s season ended without another appearance in the series.

The first of Atlanta’s three comeback victories happened in St. Louis, with John Smoltz on the mound in Game Five. The 29-year-old Smoltz already had built a reputation as a clutch postseason performer3 and after winning 24 games during the regular season, he was soon to become a runaway winner of the Cy Young Award.

Manager Tony La Russa, in his first year with the Cardinals, chose Todd Stottlemyre on three days’ rest over rookie Alan Benes to pitch his team into the World Series. The veteran right-hander was acquired in an offseason trade after winning two championships with the Toronto Blue Jays. He had outpitched Greg Maddux in Game Two in Atlanta and hoped to seal the deal before a raucous crowd of 56,782 at Busch Stadium.

The Redbirds fans barely had time to settle into their seats before the Braves put the game out of reach, scoring five runs in the first inning. Chipper Jones drove in two runs on an opposite-field double to left and then scored on Fred McGriff’s bloop single. After a Jermaine Dye single, Jeff Blauser’s fly ball fell between outfielders Willie McGee and Brian Jordan for a two-out triple to make it 5-0. The carnage lasted just under 14 minutes.

Smoltz worked through a bases-loaded jam before the Braves went back to work on Stottlemyre. The first three batters all reached base in the second inning and Jones provided the knockout punch with an RBI single against the Cardinals starter, who was removed after allowing nine hits and seven runs.

“We had that killer instinct and we kept piling it on,” Jones said.4

The Braves didn’t let up against reliever Danny Jackson, scoring three more runs in the fourth inning, then adding another on Javy Lopez’s home run off Tony Fossas to make it 11-0 in the fifth.

Even Smoltz recorded two hits and scored a run at the plate, while calmly scattering seven hits in seven shutout innings. The Braves won for the fourth time in Smoltz’s five starts when facing elimination. He also surpassed Yankees Hall of Famer Whitey Ford’s record with his 95th career strikeout in postseason play.5

By the time McGriff finally ended the Braves’ barrage with a two-run homer in the ninth, Atlanta had scored 14 runs on 22 hits – tying and setting an LCS record, respectively – and set a mark for the most lopsided win in LCS history.6

“It was a joke,” Cardinals third baseman Gary Gaetti said. “They set the table and they cleaned the dishes, too. It was ugly. … They just smoked us, that’s all.”7

The scene in the Braves clubhouse was far more jubilant after Game Five than it had been the day before. Team owner Ted Turner paraded through the room, chanting “More baseball, more baseball …”8

“Everybody made up their mind that there is no tomorrow. It’s got to be today,” said Lopez, who went 4-for-5 with two doubles, a homer, and four runs scored.9 Mark Lemke also recorded four hits and leadoff hitter Grissom had three hits and scored twice.

Tomorrow looked even brighter for the Braves, who headed home knowing their top two aces, Greg Maddux and Tom Glavine, were ready on full rest for the final two games.

“We went from not knowing if tomorrow was gonna come to feeling extremely confident about our chances in the series,” Jones said.10

The Cardinals didn’t know it yet, but the next two games would give the Braves even more reason to celebrate.

In addition to the sources cited in the Notes, the author also consulted Baseball-Reference.com, Retrosheet.org, and the following sources:

6 The latter record lasted just three days, when the Braves’ 15-0 win in Game Seven against the Cardinals became the most lopsided shutout in LCS history.