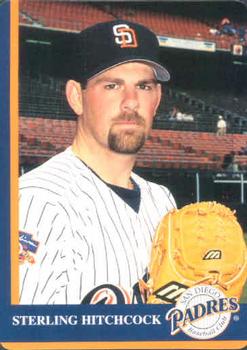 As the 1998 NLCS began, two statements seemed certain. Given the way they dominated the National League, the Atlanta Braves were nearly a consensus choice to capture their fifth pennant of the 1990s. If they did not, and the San Diego Padres did, Kevin Brown would be the main reason why.

Contrary to expert opinion, the Padres managed to dethrone the presumed NL kings –  advancing to their first World Series since 1984. And it wasn’t their ace right-hander who got them there.

In fact, Brown had his opportunity to slam the door on Atlanta two nights earlier. After San Diego had unbelievably taken a commanding three-games-to-none series lead, highlighted by a masterful three-hit Game Two shutout by Brown at Atlanta’s Turner Field, the Braves pummeled Padres relievers to salvage Game Four. Then, clinging to a 4-2 lead in Game Five at Qualcomm Stadium, manager Bruce Bochy rolled the dice. Instead of saving Brown for a potential Game Six on the road, he used him in the unconventional role of closer.

The move backfired in the eighth. Atlanta had two runners on and one out. Brown tried to throw a fastball past Michael Tucker. He didn’t. Tucker launched the pitch over the right-center-field wall and turned the game (and the momentum) around.

The Braves now led 5-4. They’d go up 7-4 and hold on to win, 7-6. The once-sleeping giant had been fully awakened. San Diego still held a three-games-to-two lead heading back to Atlanta, but it certainly didn’t feel that way.

The immense pressure once squarely on the heavily favored Braves to fulfill expectations and claim what seemed rightfully theirs was squarely on the trembling Padres – now trying to avoid the ignominious distinction of becoming the first team to relinquish a 3-0 series lead in a best-of-seven series.

Out of these pressure situations emerge unlikely heroes – those who avoid receding to the background and instead come to the forefront. That was the sentiment of Sterling Hitchcock, a 27-year-old unsung left-hander who began 1998 in the bullpen but was eventually shifted to the starting rotation and was the winner in Game Three.

After Brown’s Game Five demise, Hitchcock went to pitching coach Dave Stewart, no stranger to postseason excellence, and expressed his desire to start Game Six, despite not being on full rest.

“In my career I haven’t thrown very well on three days,” Hitchcock said after the game. “But the two starts prior to this I didn’t throw a lot of pitches. I knew pretty well that I could go out there and contribute for our team.”1

“Hitch wanted the ball,” Bochy said. “Which was the best news I heard.”2

Hitchcock did not let his manager, or his teammates, down. He kept the Braves offense, which had scored 15 runs in the past two contests, from building on its momentum. That was immense – because his opposite number, Tom Glavine, was doing the same to San Diego bats.

Through five innings, neither starter had yielded a run. Come the sixth, the stalemate was broken – and it was the Cy Young Award winner, not the journeyman, who gave in.

Back-to-back one-out singles by Greg Vaughn and Ken Caminiti placed runners at the corners. Jim Leyritz, who haunted Atlanta with his 1996 World Series homer heroics as a Yankee, was up next. Instead of a blast, Leyritz poked a weak grounder to third base – slow enough that Vaughn was able to score and break the scoreless tie.

As it turned out, one run would be enough. But the Padres went for more. Wally Joyner followed with a bouncing single up the middle, past diving shortstop Walt Weiss, which sent Caminiti home. Another single and a walk brought up the ninth spot in the batting order with the bases loaded. Bochy didn’t go to his bench.

Hitchcock was understandably far less spectacular at the plate than on the mound. Yet he made enough contact on a Glavine offering to send it into shallow left field. Danny Bautista misjudged the ball as he dove toward it. The ball ricocheted off his glove and led to three unearned runs – a boon for the Padres, a backbreaker for the Braves.

San Diego’s bullpen picked up where Hitchcock left off, not allowing a hit the rest of the way. Trevor Hoffman, as he did so often during his Hall of Fame career, set the Braves down in order in the bottom of the ninth. The Padres completed the upset.

“I also knew that should we have lost today, I’d put my money on Kevin Brown any day of the week,” Hitchcock said. “Fortunately, we didn’t have to go to that.”3

Coupled with his victory in Game Three, in which he allowed one run in five innings, Hitchcock’s two wins and a 0.90 earned-run average made him the choice for the NL Championship Series MVP. Taking into account his success during the Division Series against the Houston Astros, the unheralded pitcher had defeated three of the era’s best starters, Randy Johnson, Greg Maddux, and, finally, Glavine.

“It’s incredible to think about what he accomplished, about what he helped us accomplish,” Bochy said. “He stepped up every time we needed him to, and he gave us what we needed on three days’ rest. It just goes to show he has the heart of a competitor.”4

“I’m extremely happy for those guys over there in our locker room, for our organization, and for the city of San Diego,” said Tony Gwynn, the only remaining player from the ’84 pennant-winning club. “We all have waited a long time, and the fact that we’re going to the World Series again is great. But I’m going to tell you now: We want to win.”5

If the Padres could topple the 102-win Astros in the Division Series, then follow it up with a triumph over the Braves and their 106 victories, who would stop them now with a championship in reach?

San Diego ran straight into the Bronx Bomber buzz saw – swept in four straight. Its best chance to seize any momentum came in Game One. Homers by Tony Gwynn and Greg Vaughn put the Padres up 5-2. But there was a reason why the Yankees were so dominant in ’98. Specifically, their resourcefulness.

The seventh inning proved to be San Diego’s undoing. New York struck for a seven-spot, capped by Tino Martinez’s grand slam down the right-field line.

The Padres never recovered. A lead in Game Three resembled a mirage. That night at Qualcomm Stadium, the Yanks did the inevitable, scoring five unanswered runs in the late innings to put the series out of reach.

Considering how many opponents shared a similar fate of being outmaneuvered by a Yankees club considered to be among the greatest in baseball history, there is no shame in how the World Series turned out for the Padres.

The 1998 season should be remembered less for the fall classic and more for how they got there – and what followed. It revived baseball in San Diego and set the stage for a new ballpark initiative that passed and, subsequently, the construction of a state-of-the-art home that proved to be a sharp contrast from the cookie-cutter multipurpose facility that was Jack Murphy-turned-Qualcomm Stadium.

“I’m sure that the team’s success and the atmosphere did get people to vote for it,” hitting coach Merv Rettenmund said. “You had to be a sports enthusiast afterward, if you were at the games.”6

In addition to the references cited in the Notes, the author also consulted Baseball-Reference.com, Retrosheet.org, and Ultimatemets.com