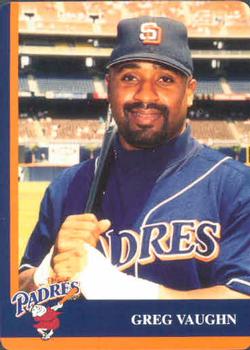 Heavy underdogs against the Yankees, who with 114 wins set a since-broken American League record, the Padres in the 1998 World Series opener faced David Wells, who “before the Series … proclaimed … that the Yankees would beat his hometown Padres in five games.” After leading the 1998 AL with only 1.2 walks per nine innings, Wells surprisingly issued a base on balls to leadoff hitter Quilvio Veras. Playing hit-and-run,2 Tony Gwynn, the marquee player in the first half century of the San Diego franchise, singled. With Padres on first and second with none out, Wells induced a double-play grounder from Greg Vaughn and fanned Ken Caminiti to escape the jam.

San Diego starter Kevin Brown retired the first four Yankees, and none of the first eight New York batters hit the ball out of the infield. Like Wells, Brown also averaged fewer than two walks per nine innings in 1998, but in the bottom of the second with one out Chili Davis had an infield hit, and Tino Martinez walked. With two outs, Jorge Posada also walked to load the bases for Ricky Ledee, the least formidable of the Yankee starters. A 24-year-old rookie who had played in just 42 regular-season games, Ledee had gone 0-for-5 in the ALCS against Cleveland. But he pulled a double down the right-field line to put New York up 2-0. Brown fanned Chuck Knoblauch to end the frame.

The Padres quickly rallied, likewise sparked by a bottom-of-the-order hit. Ninth-place batter Chris Gomez singled over a leaping Derek Jeter. With one out, Gwynn hit sharply to Martinez, who boxed the ball and could only retire Gwynn at first. The failure to turn the double play cost New York as Vaughn took a low-and-away offering by Wells over the 385-foot sign in right center for a homer that tied the game at 2.

Both pitchers settled down after shaky starts. With two outs in the bottom of the fourth, Scott Brosius hit into the left-center gap. Steve Finley, centerfielder for the Padres, made the defensive play of the game. After briefly playing hot potato with the ball, Finley recovered to unleash a strong throw to second that beat Brosius to the bag. With Veras waiting with the ball, Brosius tried a swim move into the keystone sack but was easily tagged to end the inning.

San Diego broke through in the top of the fifth. With two outs, Veras blooped a single over Jeter. The lefty Gwynn followed by pulling a homer to deep right, and, on the next pitch, the righty Vaughn pulled a no-doubter to deep left. The back-to-back blasts put the Padres up 5-2.

After the game, reporters seemed surprised about the power displayed by the usually singles-hitting Gwynn. Tom Verducci of Sports Illustrated asked the future Hall of Famer about the reaction, and Gwynn said, “It’s not like it’s the first home run I’ve ever hit. I’ve hit a few before and I’ve hit a few longer than that. Give me a break.”3

Consecutive singles by Ledee and Knoblauch put two Yankees on in the bottom of the fifth. With Joey Hamilton and Mark Langston warming up in the bullpen, Brown got grounders from Jeter and Paul O’Neill to protect the three-run San Diego lead.

In the top of the sixth with one out, Wells walked Wally Joyner. Holding Joyner, Martinez had the ideal position from which to field a line drive off Finley’s bat and step on the pillow for a double play before the runner could retreat.

Hamilton and Langston both warmed up as the bottom of the sixth began, but Brown had a 1-2-3 inning that featured strikeouts of and Martinez. Wells also had a 1-2-3 frame in the top of the seventh.

The bottom of the seventh began innocently enough as Brosius grounded to Veras. After the out, Fox ran a graphic showing that the Yankees had a league-leading 50 come-from-behind wins. On cue, Posada singled over Veras. At 102 pitches, Brown readied to face Ledee with Donne Wall getting ready in the pen. Manager Bruce Bochy faced his first crucial decision of the contest. Ledee had two line-drive hits off Brown, who probably had few effective pitches left.4 Bochy stayed with Brown, who proceeded to walk Ledee on four straight pitches, none of which came close to the plate. Bochy then pulled Brown and brought in Wall.

Wall threw only four pitches. Facing Knoblauch, Wall missed with the first two before grooving one that Knoblauch hit high and barely inside the foul pole and over the left-field wall to tie the game. On the next pitch, Jeter smacked a line-drive single up the middle. Bochy, who had Langston warm up the last three innings, finally brought him in to face the heart of the New York batting order.

O’Neill flied out to leave Jeter on first with two outs and a 5-5 score. But then Langston wild-pitched Jeter to second, walked Williams intentionally, and walked Davis to load the bases with two outs for Martinez. Fox showed a graphic entitled No Mr. October. At that point, Martinez with New York had a .184 career postseason batting average with only one home run and five RBIs. Fox also showed Martinez’s career stats with the bases loaded, which looked much better as Tino had a .326 batting average with six grand slams.

Perhaps less sharp than usual after having loosened for so long, Langston fell behind Martinez 2-0 and then, surprisingly given his wildness and the location of the game, got the call on a borderline pitch to make the count 2-1. With a 2-2 count, Langston threw a similar borderline pitch, more over the plate but possibly a little low as catcher Carlos Hernandez jerked his glove up in the strike zone after receiving the ball. The argument about whether this borderline call or the one earlier in the at-bat appeared more egregious became moot when Martinez hit a grand slam on the full-count pitch that followed, making the 3-2 pitch famous and the 2-0 pitch forgotten.

“It was obvious we would have liked to have had it [called strike three],” … Bochy said. “Langston, he thought it was there.”5

The grand slam, the 17th in World Series history and the first since Atlanta’s Lonnie Smith on October 22, 1992 off Toronto’s Jack Morris, gave the Yankees a 9-5 lead.

The Padres needed four runs against the formidable back end of the New York bullpen. Facing Jeff Nelson, Gwynn singled under Martinez’s glove. Vaughn broke his bat and reached on a fielder’s choice as Nelson got the force at second. Mariano Rivera warmed up for the Yankees. Caminiti walked to put the tying run on deck. The lefty specialist Graeme Lloyd joined Rivera in the New York bullpen. Nelson struck out Jim Leyritz before yielding to Rivera, who needed four outs for the save.

San Diego could not get the ball out of the infield against Rivera. Joyner grounded to Knoblauch, but the shaky second baseman booted the ball as Vaughn scored. Rivera then retired Finley on a grounder to Martinez.

Leading 9-6, the Yankees had a big opportunity to pad the lead after loading the bases without a hit in the bottom of the eighth, but Randy Myers struck out O’Neill and Williams to keep the score the same.

Rivera had an easy ninth. He struck out pinch-hitters Greg Myers and the future Yankee John Vander Wal before Veras fouled out to Brosius to seal the New York victory.

Fox named Knoblauch and Martinez co-players of the game, and their homers clearly proved pivotal toward the outcome. But the inability of the Padres’ pitchers to retire the unheralded Ledee really proved the difference in the game and hurt San Diego throughout the championship. Ledee went 2-for-3 in Game One and in Games Two and Four as well, helping to lead the powerful Yankees to a four-game sweep of the overmatched Padres.

2 All observations of the game come from the author’s reviewing a soundless video recording of the Fox broadcast available at www.youtube.com/watch?v=JvMCTNX1eJ0 (accessed May 9, 2018).

4 “A weary Brown began sending up red flares in the fifth inning, when he told Bochy, ‘You might want to have somebody ready [for relief].’ Then, before the seventh, Brown told his manager to ‘pay attention’ to him.” Tom Verducci, “Tourist Trap Awestruck–And Awful–On Their First World Series Visit To The Bronx, The Padres Had To Contend With Both The Yankees And History,” Sports Illustrated, October 26, 1998.