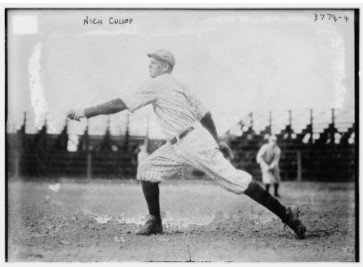 As the Federal League entered its second season, baseball fans in St. Louis had not celebrated a major-league championship since Charles Comiskey’s American Association club of 1888. The St. Louis Terriers, or Sloufeds, as they were called, finished dead last among the eight Federal League clubs in 1914. Under the tutelage of manager Fielder Jones the club became a contender for the outlaw league’s championship in 1915.

In the waning days of the 1915 season, the Terriers went on a nine-game winning streak that positioned the club for a shot at the league championship. The winning ended on Wednesday, September 29, at Federal League Park in St. Louis. Gene Packard of the Kansas City Packers not only pitched a shutout, he walloped one of Dave Davenport’s shoots over the right-field wall for the sole tally of the day.

The next day Eddie Plank pitched the Terriers’ 4-2 victory vs. Kansas City. Now the Terriers (86-66) were only a half-game behind first place Pittsburgh (85-64). Because of rainouts, Pittsburgh and Chicago would finish the season with consecutive doubleheaders over the weekend. Chicago (83-65) was in third place, needing to win at least three of the four games. After Chicago defeated Pittsburgh in the first game of a doubleheader on Saturday, the Terriers’ chances for a pennant seemed possible if they could win the final two games. A loss would end their championship aspirations. There was no baseball on Friday, so the Federal League pennant would be decided in the games of Saturday and Sunday.

On Saturday over 12,000 hopefuls made their way to Federal League Park and most all stayed to the end. “The seats were packed to the hilt,” reported the St. Louis Post-Dispatch, although it was not enough to rope off parts of the outfield for standing room.1 Nearly every fan brought a cowbell, horn, or whistle to support the home team.

Pitching for St. Louis was 6-foot-6, 220-pound Dave Davenport, who had already thrown 385⅔ innings, struck out 226 batters, and pitched two complete games of a doubleheader in the brutal July heat of St. Louis. However, none of his 22 victories that season were against Kansas City.

Packers manager George Stovall chose Nick Cullop, one of the best pitchers in the Federal League, to oppose “Big Dave.” After two seasons in the low minors, the Cleveland American League Club purchased the erstwhile Virginia farmer in 1913. Cullop was used mostly in relief and a year later pitched in only one inning for the Indians. Before Cleveland could ship Cullop to the minors, he jumped to the Federal League, landing with the Kansas City Packers. That first year in the Federal League, Cullop was 14-19 but posted an outstanding 2.34 earned-run average on a losing team. In 1915 Kansas City became a winning team, and so did Cullop, having already won 21 games when he took the mound on October 2. The Kansas City Times described Cullop’s unusual pitching motion as “his own peculiar and nefarious left-handed way.”2 The New York Times described Cullop’s pretzel delivery: “When Cullop pitches, he winds up like the spring of a watch. Then, as he untangles himself, the ball shoots out and comes up to the batsman looking about the size of a pill.”3

Both pitchers put zeros on the scoreboard for the first two innings. St. Louis scored first with a run in the third. The Terriers’ eighth-place hitter, Ernie Johnson, led off with a single, then went to third when Davenport punched a rare hit through the right side of the infield. An out later Ward Miller hit a roller to Kawfeds’ second baseman Pep Goodwin, who rushed his throw to catcher Duke Kenworthy. Johnson was called out at the plate by umpire Joe O’Brien, but the arbiter reversed his decision when the catcher dropped the baseball.

Kansas City almost tied the score in the visitors’ fourth when Al Shaw launched one of Davenport’s fastballs on a long ride toward the center-field fence. Speedy center fielder Armando Marsans sprinted to the depths of the outfield and caught the pill just short of the fence.

The crucial fifth inning began badly for the Terriers when shortstop Bobby Vaughn fumbled Ted Easterly’s easy bounder. The next Kawfed batsman, Kenworthy, came up empty on three swings at Davenport’s low pitches. George Perring smacked a safety to center field, but Stovall could only manage a bounder to first baseman Babe Borton while the two baserunners moved up a base. With two outs, Fielder Jones shouted for his pitcher to issue a pass to Johnny Rawlings that filled the bases. The locals relaxed and hooted at the Packers’ pitcher as he strolled to the batter’s box. It didn’t take long to quiet the crowd when Cullop whacked Davenport’s first pitch so hard it shot between Marsans and right fielder John Tobin. Easterly and Perring scored easily, and Rawlings also tallied when catcher Grover Hartley failed to corral the throw to home plate. Cullop’s double gave Kansas City a 3-1 lead.

St. Louis did have chances in the seventh and eighth innings. The Terriers had baserunners on second and third with two outs in the seventh; but the next batter was Big Dave. Davenport was an anemic batter, judging from his .092 batting average. Manager Fielder Jones didn’t have much on the bench either, but he chose to send the lefty-hitting Runt Walsh to pinch-hit for Davenport.

Jones had protested to both umpires several times that Cullop was using emery paper or some other method to roughen the surface of a ball. When Cullop shot the first pitch past Walsh for a strike, Jones accused the hurler of defacing the baseball. When the Terriers boss demanded a look at the ball, Cullop refused to comply with the opposing manager’s demand. Jones blew his top and, when several St. Louis players surrounded Jones, Cullop, and umpire O’Brien on the mound, the pitcher acquiesced. The argument went on for about five minutes before Jones returned to the bench. O’Brien tossed the ball in question out of the game and gave Cullop a fresh ball. By this time, the St. Louis loyalists were riled up, screaming taunts in attempts to unnerve the Kansas City pitcher. Throughout, fans in the box seats behind home plate waved newspapers, scorecards, and coats, but the opposition pitcher did not waver. The home team’s rally died when Cullop’s third strike sailed past Walsh, who didn’t take the bat off his shoulder.

Doc Crandall, a veteran of six years with John McGraw’s pitching corps, replaced Davenport in the top of the eighth. The Packers added an additional score off Crandall’s slow ball on Pep Goodwin’s single, a sacrifice bunt, and Easterly’s single, giving the visitors a 4-1 lead.

The Terriers threatened again in the bottom of the eighth. “With Vaughn and Miller on the sacks and none out,” reported the Kansas City Star, “Armando Marsans cut a nasty hopper back of third. The Kawfeds shortstop Johnny Rawlings sprinted over, dug up the ball, and made a quick pass by Goodwin to get Vaughn.”4 The relay to first baseman Stovall completed a double play.

After the Terriers went out meekly in the ninth, the crowd quietly filed out of the ballpark. It would be 11 more years before St. Louis would see a championship banner flying in the city.

The Sloufeds team president, Lloyd Rickart, canceled the large order of lumber for temporary bleachers. When Ernie Johnson made the final out, there would be no need for the extra seats. Fielder Jones exited the park within minutes without comment.

The next afternoon, the Terriers ended their season before 7,500 fans with a 6-2 victory over the Packers. Doc Crandall was hit hard, so Eddie Plank hurled the final seven frames for the St. Louis Federal League baseball club, allowing only five hits and not a single marker.

In Chicago that same afternoon, the Chicago Whales split a doubleheader with Pittsburgh. Due to uneven numbers in games played among teams, St. Louis won one more game than the Whales, but also lost one more. St. Louis finished the 1915 Federal League standings in second place by a percentage of .00086.

A few months later, a Chicago newspaper broke the story of an attempt to “fix” the October 2 game in St. Louis. “Before the deciding game,” Packers manager George Stovall disclosed, “certain people came to me and offered a big sum of money if I’d promise not to work Cullop. You bet I pitched Cullop, and I told all the players, and they did their best to win. We took the game and deprived St. Louis of what chance it had of winning. … I don’t mean to infer that the club owners had any knowledge of the attempt to frame the game, but the people who made the proposition were around the ballpark almost every day.”5