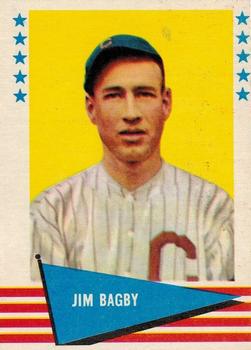 By the time the 1920 baseball season wound down to the last couple of days on the schedule, enough had happened to make the season one for the history books. On August 16 at the Polo Grounds, Cleveland shortstop Ray Chapman was hit in the base of his skull by a fastball thrown by New York Yankees hurler Carl Mays. Chapman crumpled to the ground around home plate, bleeding from the errant pitch. He was taken to St. Lawrence Hospital for immediate surgery. Although he did rally a bit after the operation, Chapman died early the next day. He remains the only major-league player to lose his life on the field of play.

At the time of Chapman’s death, the American League standings were a three-team race to the pennant. Cleveland, which defeated New York 4-3 on the day Chapman was beaned, led the Chicago White Sox by a half-game and New York by 1½. The AL race was heating up for sure, and Cleveland would be playing with heavy hearts and minus their star shortstop.

On September 29 Babe Ruth smacked his 54th home run of the season, a new record for round-trippers hit in a season. Ruth would better the mark the following season with 59 home runs in 1921. Also, on September 29, it came to light that a grand jury in Cook County, Illinois, had handed up indictments against eight players of the White Sox for allegedly throwing the 1919 World Series against Cincinnati. The seven players (Chick Gandil had retired after the 1919 season) were suspended for the remainder of the 1920 season, putting a major crimp in the White Sox’ attempt to repeat as the AL pennant-winners.

As the month of September closed, the AL race was still too close to call between Cleveland and Chicago. The Indians (96-54) led the White Sox (95-56) by 1½ games. The Indians were closing out the season with a four-game slate in Detroit at Navin Field, while the White Sox were heading to St. Louis for a three-game set.

On October 1 the Indians drew closer to the flag when they split a doubleheader with the Tigers. The White Sox dropped an 8-6 game to the Browns, and the Tribe now had a two-game lead, with only two more games to play.

With one more win to clinch the pennant, Cleveland manager Tris Speaker sent his ace, Jim Bagby, to the hill. Four days before, on September 28, Bagby had won his 30th game of the season as the Indians outlasted the St. Louis Browns, 9-5, at Sportsman’s Park. It was a less-than-stellar performance by the veteran right-hander. He went the distance, giving up five earned runs, walking one and striking out one. Bagby contributed to the victory with two hits, two RBIs and two runs. With the win, Bagby became the 18th pitcher to reach the 30-win plateau in a season in the modern era (1901 and onward).

Detroit manager Hughie Jennings countered with southpaw Red Oldham. In 1920, not one starter on the Tigers’ staff posted a record of .500 or better. Oldham took the hill for the final time in 1920 with an 8-12 record and a 3.99 ERA.

Bagby and Oldham took turns silencing the bats of their opponents in the first two innings. But in the top of the third, Cleveland batted around and scored three times. The Tigers committed two errors, one a throwing miscue by third baseman Bob Jones, and the other a fielding error by second sacker Ralph Young.  The big hit was a two-run single by Larry Gardner.

Cleveland held its 3-0 lead, and then built on it in the top of the sixth. With two down, Bill Wambsganss laced a single to center field and Speaker followed suit with a base hit to right. Wamby sped around to third base. Both baserunners scored when George Burns doubled to center.

Meanwhile, the White Sox were pounding the Browns, eventually winning 10-7. But it looked as if that game was a moot point. The Indians were on their way to the pennant, leading the Tigers 5-0 after six innings. If there were any doubts, they were eased when Cleveland tagged Oldham for four more runs in the top of the seventh inning. With the bases loaded, Bagby tripled to clear the bases. One batter later, Joe Evans knocked in Bagby and Cleveland led 9-0.

Each team tallied a run in the later innings to make the final 10-1, Cleveland. The Indians had won their first pennant. Cleveland owner Jim Dunn sent a wire to Speaker: “My sincere congratulations to you and to all members of the Cleveland ball team.  I am sharpening the tomahawks and I am sure we will scalp the Dodgers. You fought squarely and fairly and deserve the championship.”1

Red Oldham took the loss to drop his record to 8-13. In eight innings of work, he was charged with 10 runs (5 earned). He walked five and had no strikeouts.

Cleveland met Brooklyn in the best-of-nine World Series, and topped the Robins five games to two. Bagby made a bit of history, as he smashed a three-run homer off Burleigh Grimes in Game Five at League Park. Bagby became the first pitcher to hit a home run in the World Series.

The author accessed Baseball-Reference.com for box scores, play-by-play information, and other data, as well as Retrosheet.org.