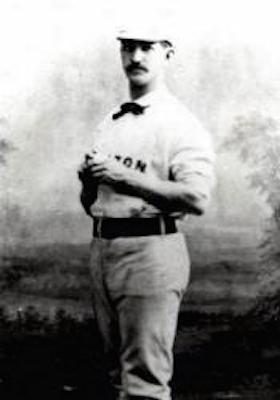 Just as there was no word for the Internet until it existed, there was no phrase in 1874 to describe a game in which a pitcher did not allow a hit. Even in the 1880s, after a few pitchers had held teams hitless, or even retired 27 men consecutively, the phrases “no-hitter” and “perfect game” were not part of baseball’s lexicon. In 1875, the Philadelphia Whites’ Joe Borden became the first man to pitch a complete game without allowing a hit, but a year earlier, on October 20, 1874, 18-year-old Tommy Bond of the Atlantic Club of Brooklyn came within a single out of throwing the first major-league no-hitter.

The Atlantics were one of the very best teams in baseball during the 1860s, but they had been one of the worst since joining the National Association in 1872. Bond, a native of Ireland, made the team a little better when he joined them in 1874. Although pitching rules limited deliveries to below the hip, all of the top pitchers tested the limits and threw much harder than their predecessors of a decade earlier. Bond was one of the hard throwers, and against the Mutuals of New York on October 20, he was overpowering.

While there was no phrase to describe a no-hit game, there had been a sufficient number of shutouts to brand them a “Chicago,” and that is how the New York Clipper headlined its account of the 5-0 Atlantic win: “The Mutuals Chicagoed.” With better fielding, the Atlantics, whose runs were all unearned, would have been Chicagoed as well, for they had managed just four hits.

With two outs and no one on base in the bottom of the ninth, Mutual first baseman Joe Start stepped to the plate. He was the 30th member of his team to bat; three had reached on Atlantic errors and Bond had retired the other 26. The left-handed Start was one of the best Mutual batters, and he hit a solid double to left-center field for the first New York hit. Tom Carey followed with a single and Start moved up to third. John Hatfield then hit a long fly to right field, but John Chapman made a fine catch and the game was over.

A shutout was called a Chicago because the Mutuals had blanked a boastful Chicago team in 1870. Had Bond retired Start, perhaps a no-hitter would have been referred to as being “Bonded.” Borden was the first, but his surname didn’t have the proper alliteration. Bond won 234 major-league games, but he never threw a no-hitter, although on October 20, 1874, he came close. 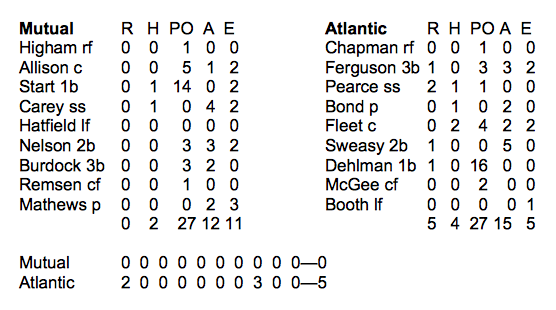