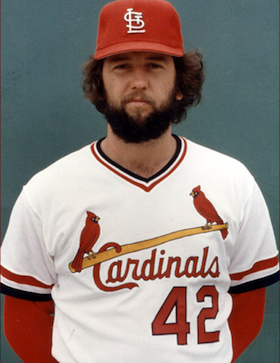 You hear the phrase “On paper, they are the best team in the league” all the time in professional and collegiate sports. Of course, the ready-made answer to that statement is that the outcomes of games or contests are not decided on paper.

This may have applied to the St. Louis Cardinals and the Milwaukee Brewers, who were the combatants in the 1982 World Series. The matchup might have looked like a mismatch to some who believed Milwaukee had the statistical advantage.

The Cardinals had only one batter who exceeded 100 RBIs in 1982 (George Hendrick, 104); only one who batted over .300 (Lonnie Smith, .307; Keith Hernandez was close at .299); and no player hit more than 20 home runs; Hendrick was top man with 19. Their offense was built on speed. Smith stole 68 bases and led the league in runs with 120. Tom Herr and Ozzie Smith each stole 25 bases and Willie McGee was right behind them with 24.

By contrast, the Milwaukee Brewers were given the name Harvey’s Wallbangers for both their hitting prowess and in a nod of respect to their manager, Harvey Kuenn. The Brew Crew had three players who swatted over 30 home runs and knocked in over 100 runs: Gorman Thomas (39 HRs, 112 RBIs), Ben Oglivie (34 HRs, 102 RBIs), and Cecil Cooper (32 HRs, 121 RBIs). Robin Yount just missed joining the trio as he belted 29 homers and drove in 114 runs. And the Brewers were not neophytes in the running game: Paul Molitor swiped 41 bases and led the league with 136 runs scored.

Milwaukee’s pitching staff was anchored by right-hander Pete Vuckovich (18-6, 3.34 ERA), who after the season was voted the winner of the American League Cy Young Award. Mike Caldwell, a southpaw, also had a good year (17-13, 3.91 ERA).

Nicknamed the Suds Series because both cities were prominent in the brewing industry, the King of Beers (Budweiser) was going keg-to-keg with the Champagne of Bottled Beers (Miller). Fans in both metropolises “hopped” with excitement and could “barley” contain themselves. Especially fans in the Dairy State, whose Brewers were making their debut in the fall classic. Why, they could hardly “camembert.” Yes, now that the Series was here, it was going to be a “gouda” day.

Milwaukee held a 3-2 advantage in the Series on the strength of two-run victories in Games Four and Five at County Stadium. Both teams returned to Busch Stadium for Game Six (and Game Seven if necessary). The Brewers were hoping to finish off the Cardinals while St. Louis was looking for some “home cooking” to extend the series to Game Seven.

In Game Six, the Cards blitzed their guests with a six-run sixth inning (which was also interrupted by a 2:13 rain delay). St. Louis was leading 7-0 at the time and went on to win 13-1 and force Game Seven.

The pitching matchup was a rematch of Game Three, with Andujar opposing Vuckovich. Andujar was the 6-2 winner in that game, as Sutter picked up his first save. Vuckovich surrendered six runs, four earned and the Brewers made three errors.

Busch Stadium was rollicking to a fever pitch for Game Seven, with a sold-out crowd of 53,723 disguised in a sea of cardinal red. St. Louis scored first, in the bottom of the fourth inning. McGee led off with a single and moved to third base when Herr singled to right field. After Ozzie Smith popped out, Lonnie Smith beat out a grounder to shortstop and McGee scored. St. Louis did not enjoy the advantage for long; Oglivie homered to right field leading off the fifth.

Milwaukee took the lead in the top of the sixth inning. Jim Gantner led off with a double to right-center field. He moved to third when Molitor laid down a bunt to the pitcher. Andujar’s throw to first hit Molitor in the back and got past Herr, who was covering first base. Gantner scored and Molitor went to second base. Yount followed with a single to the right side of the infield to put runners at the corners, and Cooper’s fly ball scored Molitor.

The Cardinals came right back in the bottom of the frame. With one out, Ozzie Smith singled to left field and Lonnie Smith doubled him to third. Bob McClure relieved Vuckovich. The chess match began as St. Louis skipper Whitey Herzog sent up right-handed-hitting Gene Tenace to hit for Ken Oberkfell against the lefty McClure. Tenace walked and Mike Ramsey ran for him. Hernandez took his place in the batter’s box. “When I went up, it was in my mind to get a hit,” said Hernandez. “I knew a sacrifice fly would only get one run home and leave us one run behind.”1 McClure who was a grade-school teammate of Hernandez in the San Francisco area, was looking for two outs, never mind just one. “I was looking for a double play,” said McClure. “It didn’t work out that way.”2

Indeed. Hernandez singled to right-center to drive in two runs and tie the game, 3-3. Then Hendrick singled home Ramsey with the go-ahead run. The Cardinals led, 4-3. “I pride myself on being an RBI man,” said Hernandez. “I’d better be if I’m hitting third.”3

Andujar whiffed Thomas to lead off the seventh inning. It was his only strikeout of the game. He gave up a scratch single to Charlie Moore, but it did no damage. Sutter relieved Andujar in the top of the eighth and set the Brewers down in order. “Once (Andujar) got us to the seventh inning, we’ve got the best reliever in baseball,” said Herzog. “We pay him an awful big amount of money. I figured we better use him.”4

St. Louis add two insurance runs in the bottom of eighth inning. Lonnie Smith led off with a ground-rule double to right field. Ramsey struck out on a foul bunt. Hernandez walked, and Caldwell relieved Moose Haas. Darrell Porter followed with a single to right field to score Smith and send Hernandez to third base. Steve Braun’s single to center scored Hernandez and the Cardinals led 6-3.

That was the final score: Sutter set Milwaukee down 1-2-3 in the ninth. Hundreds of fans stormed the field after the final out, as the scoreboard flashed “We Win.” It was the ninth World Series championship in the storied history of the St. Louis Cardinals. Darrell Porter, who was the Most Valuable Player of the ALCS, was also named the Series’ MVP. He was 8-for-28 with two doubles, one home run, and 5 RBIs. He threw out two of three would-be basestealers. Jim Kaat, in his 24th season, was a World Series champion for the first time.

“We just got beat by a better team,” said Vuckovich.” They deserve anything they got – and they got a ring from the World Series tonight. I felt like I let down my teammates, all Milwaukee. But tomorrow’s another day and next year’s another year.”5