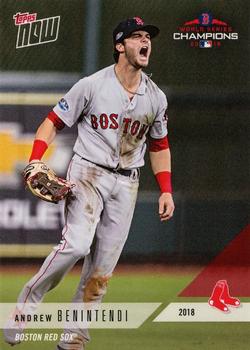 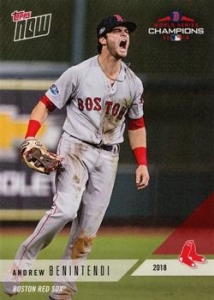 After enduring an 86-year drought (1919-2003), the Boston Red Sox were going for their fourth world championship in 15 years, while the Los Angeles Dodgers were suffering a 30-year drought of their own, since they’d beat Oakland in 1988. They’d made it to the postseason 11 times in those 30 years but come up short every time.

It was the sixth year in a row the Dodgers had played in the postseason, and the second year they’d made it to the World Series. They’d lost to the Astros in seven games in 2017.

The Red Sox had gone through recent years of feast or famine, winning the World Series in 2013, the year after finishing last in the AL East. Then they finished last in 2014 and 2015, before rebounding to place first in both 2016 and 2017 – though in the two latter years combined, they won only one postseason game.

The two contenders in the 2018 World Series had won 200 major-league games in the regular season. The Red Sox had finished a franchise-record 108-54 (a comfortable eight games ahead of the second-place Yankees in the AL East) while the Dodgers had finished 92-71, just one game ahead of the Colorado Rockies in the NL West.

The Red Sox had then beat the 100-win Yankees team, three games to one, in the Division Series and beat the reigning World Champion Houston Astros, who had won 103 regular-season games in 2018, four games to one, in the ALCS. They were making it look easy, coming into the World Series with 115 wins and just 56 losses.1

The Dodgers had had to fight harder. They’d been in second place near the end of September, with just three games left on the schedule. They beat the Braves relatively easily in the Division Series, but the Brewers took the NLCS to the full seven games. Dodgers fans hoped this had firmed up their team in better fighting shape.

The Red Sox led all major-league teams in runs scored, base hits, and slugging percentage. Against NL teams in 2018, they were 16-4. They were often described as relentless.2

In the first game of the 2018 World Series, played at Boston’s Fenway Park, Red Sox manager Alex Cora started Chris Sale (12-4, 2.11 ERA). It was his first start in 10 days due to a stomach ailment that had seen him briefly hospitalized.3

Three-time Cy Young Award winner Clayton Kershaw took the mound for manager Dave Roberts’s Dodgers.4 It had been an unusual year for Kershaw, a starter all season but with only 14 decisions to his name (9-5, with a 2.73 ERA). It was the first time the veteran Kershaw had ever pitched at Fenway. And, Bill Plaschke of the Los Angeles Times wrote, Kershaw did not pitch as well in the postseason. In regular-season play, he was 153-69 with a 2.39 ERA, but “the difference in his regular-season ERA and postseason ERA is the highest among all pitchers in baseball history with at least a dozen postseason starts.”5 The Boston Globe’s Chad Finn noted that Kershaw had an ERA of 5.44 in nine postseason Game One starts.6

Among active pitchers, Sale’s career ERA was second only to Kershaw, at 2.89.

Neither pitcher made it through five innings; both left in the fifth without recording an out.

Boston scored first, in the bottom of the first. Right fielder Mookie Betts – the American League MVP for 2018, with a .346 batting average that was best in the majors – lined a single to center and promptly stole second on Kershaw’s first pitch, whence he scored on left fielder Andrew Benintendi’s single through second base and into right field. Benintendi took second on the throw to the plate. After one out, DH J.D. Martinez singled him home with a hit to left field. 2-0, Boston.

Aware of Sale’s dominance against left-handed batters, the Dodgers featured a lineup exclusively of right-handed hitters. Dodgers DH Matt Kemp hit a solo home run into the Monster seats atop the left-field wall off Sale in the top of the second, and the Dodgers tied it in the top of the third on consecutive one-out singles by third baseman Justin Turner, first baseman David Freese, and shortstop Manny Machado.

In the bottom of the third, with a runner on first base, J.D. Martinez shot a double off the base of the wall in the center-field triangle, edging the Red Sox ahead, 3-2. Martinez won an unprecedented two Silver Slugger awards in 2018, one at DH and one as an outfielder.

After Sale walked second baseman Brian Dozier to lead off the fifth, he was at 91 pitches and Cora made a move, beckoning in right-handed reliver Matt Barnes (6-4, 3.65). After a single and a strikeout, Barnes threw a wild pitch and the runners moved to second and third. Dozier scored on Machado’s groundout to second, and it was 3-3.

In the Red Sox fifth, Kershaw walked Betts and then gave up a single to Benintendi. Roberts summoned righty Ryan Madson from the Dodgers bullpen. He’d only arrived from the Nationals after an August 31 deal and had just 8⅓ innings (0-0, 6.48) with Los Angeles. He threw a wild pitch, too, and then walked first baseman Steve Pearce to load the bases with nobody out. Madson struck out J.D. Martinez on three pitches, then got shortstop Xander Bogaerts to ground out to second. Chad Finn dubbed this “perhaps the subtly most important play of the night” – as Bogaerts “busted it down to the line to beat out a potentially inning-ending 6-4-3 double play.”7 Betts scored from third base, thanks to Bogaerts’ hustle. The Red Sox took the lead. A single to right by third baseman Rafael Devers – right under Dozier’s dive – scored Benintendi. Second baseman Ian Kinsler lined out to right field, but it was 5-3, Boston.

Joe Kelly pitched the sixth for the Red Sox, with two K’s and a grounder to first, Kelly covering the first-base bag for the third out.

Julio Urias pitched the bottom the sixth, nearly a carbon copy – two strikeouts and a popup to first base.

Machado drove in his third run of the game in the seventh; Ryan Brasier pitched for Boston. Two singles and a walk loaded the bases with one out. Machado hit a sacrifice fly to center field. Eduardo Rodriguez took over for Brasier and got the final out. It was a one-run game.

Benintendi led off the bottom of the seventh with a ground-rule double, his fourth hit of the game (every one against a left-handed pitcher). Pedro Baez replaced Urias. He struck out two, intentionally walking Martinez in between the strikeouts. After left-hander Alex Wood entered as the third pitcher of the inning for Los Angeles, Cora sent up the right-handed Eduardo Núñez (who had hit .344 against lefties in 2018) to pinch-hit for Devers, and Núñez came through big, with a three-run homer.8 The Fox broadcasters had just called him a “good bad-ball hitter” and he took one that was low and inside, and golfed it into the front row of the Monster seats right at the base of the light tower. It was 8-4, Red Sox. It was yet more “two-out damage” done by the Red Sox, something in which they seemed to have specialized all season long.

Nathan Eovaldi induced three groundball outs in the eighth and Craig Kimbrel got one, then struck out the final two Dodgers, and the game was over. Barnes got the win and Kershaw bore the loss.

“To beat a club like that, you’ve got to play a cleaner game defensively,” Roberts said after the game. “I thought we pitched them OK. But that’s a good offense over there.”9

The Boston Globe’s Peter Abraham noted that there had been 10 pitching changes in the game and six pinch-hitters. The Red Sox bullpen had allowed just one run in five innings of work. “In the end,” he wrote, “the biggest edge for the Red Sox was their rookie manager and his October-long knack for making the right decision.”10

In addition to the sources cited in the Notes, the author consulted Baseball-Reference.com,  Retrosheet.org, and the YouTube video of the game.

3 He had jokingly said it was because of an infected belly button ring. See Owen Pence, “Feeling Better, Ace Sale Gets Some Belly Laughs,” Boston Globe, October 22, 2018: C1.

4 Roberts had been a hero for the Red Sox in 2004, his do-or-die stolen base in Game Four of the ALCS against the Yankees, scoring the tying run moments later and keeping the Red Sox alive when on the brink of elimination. Roberts and Cora had been teammates on the Dodgers from 2002 through most of 2004. Both had World Series rings as players – Roberts with the 2004 Red Sox and Cora with the 2007 Red Sox, with whom he had played from 2005 to 2008. The 2018 World Series was the first in which both managers were minorities. They had been on opposites just the year before, Roberts managing the Dodgers while Cora was Astros manager A.J. Hinch’s bench coach. That gave Cora another ring. For a story on their relationship, see Bill Shaikin, “Former Dodgers Teammates Dave Roberts and Alex Cora Will Go Head to Head as Managers in the World Series,” Los Angeles Times, October 22, 2018. search-proquest-com.mcpl.idm.oclc.org/latimes/docview/2124158034/784A5D64EDF144E6PQ/3?accountid=69. See also Peter Abraham, “They Have Lots in Common,” Boston Globe, October 22, 2018: D1.

8 Given the way the inning unfolded, the Núñez three-run home run resulted in one earned run being charged to each of three Dodgers relief pitchers, Urias, Baez, and Wood.

9 Andy McCullough, “Dodgers Cannot Recover from Mistakes and Fall to the Red Sox in Game 1 of the World Series 8-4,” Los Angeles Times, October 23, 2018. search-proquest-com.mcpl.idm.oclc.org/latimes/docview/2124513338/784A5D64EDF144E6PQ/15?accountid=69. The move to replace Baez with Wood was playing the standard matchups – using a left-hander to pitch to a left-handed batter (Devers), but Baez hadn’t given up a run since September 9 while Wood had already given up two home runs in the postseason. When Núñez hit for Devers, Wood threw him just the kind of pitch he feasted on. Brian Dozier had been a teammate of Núñez with the Twins. “I’ve seen him take stuff off the dirt plenty of times. … I’ve seen him golf stuff down and in on him.”