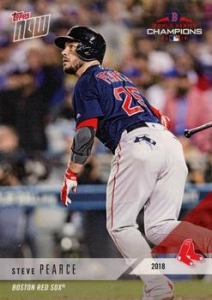 After their 18-inning victory in Game Three, the Los Angeles Dodgers were back on the field less than 17 hours later, with left-hander (and Boston native) Rich Hill pitching against the Red Sox, hoping to see his team even up the Series at two wins apiece. Starting for the Red Sox was another lefty, Eduardo Rodriguez, hailing from Venezuela. Nathan Eovaldi had been Boston’s planned Game Four starter but after all the innings he worked in Game Three, that was not an option.

Hill could hardly have pitched better.

The first two innings saw Hill walk one batter in each, while Rodriguez walked one batter in the first and allowed a single to Dodgers left fielder Chris Taylor in the bottom of the second.

Hill hit his opponent—Rodriguez—with a pitch in the top of the third, putting him on the bases. Moments later, Rodriguez was forced out and there was no further threat.

The next man to reach base in the game was third baseman Justin Turner, leading off the bottom of the fourth. He singled off Rodriguez, but the Red Sox pitcher struck out the next two batters and then got a popup to second base.

Red Sox catcher Christian Vázquez hit a one-out single to left in the top of the fifth, the first hit for Boston, but Hill struck out Rodriguez and center fielder Mookie Betts flied out to his counterpart in center. Rodriguez got the side in order, as did Hill in the top of the sixth.

The score was 0-0 heading into the bottom of the sixth. Hill had a one-hitter going and Rodriguez had only allowed two hits, though he’d walked a pair and hit a batter. Neither team had a runner get as far as second base.

Rodriguez hit another batter leading off the sixth, David Freese. In a game that looked like getting just one run might make a difference (and perhaps keeping in mind that the previous night’s game had only been 3-2, despite playing the equivalent of two nine-inning games), Dodgers manager Dave Roberts had Enrique Hernández pinch-run for Freese. Rodriguez struck out slugger Max Muncy on three pitches, but then Turner grounded a double right over the third-base bag and into left field. With runners on second and third and just one out, it was the first threat of the game from either side.

Manny Machado was intentionally walked. Another slugger was up; center fielder Cody Bellinger had played in every one of the Dodgers’ 162 games and homered 25 times. He’d been NL Rookie of the Year in 2017 and became NL MVP in 2019. He hit a grounder to Steve Pearce at first base. Pearce threw home to Vazquez, forcing Freese. But when Vazquez fired the ball to first base, the speedy Bellinger was in the basepath, as was the throw; Pearce had no chance to catch it. It got away, down the right-field line. Turner scored and the Dodgers had a 1-0 lead.

They added three more runs. Yasiel Puig hit a 3-and-1 pitch for a three-run homer, a no-doubter 10 or so rows deep into the seats in left-center field.2

Hill had still surrendered just the one hit. He walked shortstop Xander Bogaerts in the seventh and struck out third baseman Eduardo Núñez. He had thrown 91 pitches at this point and Dave Roberts called in a reliever, Scott Alexander, to face second baseman Brock Holt. Alexander—another left-hander—was a curious choice to replace a dominant Rich Hill. And he walked Holt on four pitches.3

After the game Roberts said, per Bill Plaschke, that “Hill warned him to watch for signs of tiring. ‘He said, “Keep an eye on me, I’ll give you everything I have, let’s go hitter to hitter, just keep an eye on me,”’ Roberts recounted.”4

Ryan Madson was called on to face pinch-hitter Jackie Bradley Jr.5 He got Bradley to pop up to second base for the second out.

Cora sent up Mitch Moreland to pinch-hit for the pitcher, Barnes. That decision paid off nicely; Moreland hit a 437-foot three-run homer deep into the right-field pavilion.6 The Red Sox were back in the game, albeit trailing by a run. It was 4-3, Dodgers. Betts lined back to Madson, 1-3.

Joe Kelly was the Red Sox pitcher who worked the bottom of the seventh. Muncy singled, but that was it.

Kenley Jansen came in to pitch the top of the eighth. He got left fielder Andrew Benintendi to ground out to the first baseman, but then—first-pitch swinging—Steve Pearce hit a solo home run to left, caught by a fan leaning over the Dodgers bullpen. The game was tied. Jensen struck out J.D. Martinez. Bogaerts flied out to right. Each of four Dodgers pitchers had give up one earned run—Hill, Alexander, Madson, and now Jansen.

Pearce had been a midseason acquisition, coming to the Red Sox from the Blue Jays on June 28. A right-handed hitter, he’d platooned with Moreland at first base during the regular season, particularly in September, playing 31 games there (and 11 as DH), since arriving in Boston.

In the bottom of the eighth, Joe Kelly surrendered singles to Machado and Taylor, but struck out Bellinger, got Puig to ground into a force play, and then struck out pinch-hitter Yasmani Grandal.

Dylan Floro was next out of the Dodgers bullpen, working the top of the ninth. The Red Sox pounced—and pounded. After Núñez fouled out to first base, Brock Holt skipped a double over the third-base bag and into left. Rafael Devers pinch-hit and singled Holt home, giving Boston the lead for the first time in the game.

Blake Swihart pinch-hit for Kelly and grounded out, second to first, but Devers reached second. Betts was walked intentionally.

Dave Roberts asked Alex Wood to pitch to Benintendi, who singled to third base, loading the bases.

Kenta Maeda came in to pitch to Pearce. Roberts repositioned a few players for defensive purposes.7

Pearce one-hopped a double off the right-center-field wall, clearing the bases. After six innings, the Sox were losing, 4-0. Now they had taken an 8-4 lead in the top of the ninth. And the scoring wasn’t over yet. Pearce came home on a Bogaerts single. It was 9-4, Red Sox.

The Dodgers weren’t done yet, either, though the deficit was too large. They scored two runs when Craig Kimbrel walked leadoff batter Brian Dozier on four pitches and then gave up a home run to Hernandez on a 1-and-1 pitch. It was 9-6.

Muncy grounded out, short to first. One out. Justin Turner singled to left field. Kimbrel then got Machado to ground out, third to first, and Bellinger to fly out to Benintendi in left. Game over, and Boston had taken a three-games-to-one lead in the World Series.

“One thing about our team, we keep playing,” said Cora of the relentless Red Sox. “They love to play baseball. They’ve been doing it since spring training and now we’re in this position.”8

Dylan Hernandez of the Los Angeles Times faulted Roberts for his bullpen use. Hill had indeed thrown 91 pitches, but Hernandez called it “only 91 pitches.” He noted that Hill had allowed only one hit to that point, and only one opponent to reach second base. The Dodgers’ analytics staff, he wrote, had “failed to address the team’s shortcomings in the bullpen, leaving Roberts with undesirable late-inning options. But the call to take out Hill in the seventh inning is on Roberts.”9 Hill was as capable of getting Holt out as Alexander was. (Alexander had been left off the roster in the NLCS.) Madson, he added, had now allowed seven of the last nine runners he had inherited to score.

Credit Pearce and Moreland on offense: Between them they had seven runs batted in. Remarkably, it was the role players who had made the difference in the offense. Through the eighth inning of Game Four, the combined quartet of Betts, Bogaerts, Martinez, and Benintendi had been 0-for-35 during the two games in LA.10

The Times’s Andy McCullough also blamed Roberts. “Dodger Stadium hushed with shock. The stands emptied when Steve Pearce roped a three-run double off Maeda and shortstop Xander Bogaerts added an RBI single. The crowd stirred when Enrique Hernandez hit a two-run homer in the bottom of the inning, but the damage was done, and the Dodgers slinked back to their clubhouse trailing three games to one.”11

It was only the second time in World Series history that a team had come back from being four runs down that late in a game.12

2 Rodriguez knew it right away and slammed his glove down on the mound before Puig got past first base.

3 Postgame comments by both Roberts and Hill failed to clarify whether anything was said to lead Roberts to believe that Hill was tiring. Andy McCullough quoted them both: “‘I felt like I was throwing the ball well, though,’ Hill said, adding, ‘I just didn’t want to end up in a situation where we ended up putting the team at risk of getting us in a situation where it’s like, OK, well, one too many hitters.’ Roberts indicated he had never before had a conversation like this with Hill. ‘He did everything to put us in a position to win a baseball game,’ Roberts said.” Andy McCullough, “The Dodgers Bullpen Implodes and Lets 4-0 Lead Slip Away in 9-6 World Series Game 4 Loss to Red Sox,” Los Angeles Times, October 27, 2018. search-proquest-com.mcpl.idm.oclc.org/latimes/docview/2126136164/84D83AA3DF4449CDPQ/11?accountid=69.

5 Defensively, adapting to the lack of a DH in a National League park, the Red Sox put J.D. Martinez (who was favoring a sore ankle) in right field, moved Mookie Betts over to center, and had Andrew Benintendi play left field.

6 After the game, Madson said, “First-pitch changeup, usually I’m not going to throw it for a strike. I don’t know where it ended up—I didn’t see the video—but I know it was up out of my hand. Definitely didn’t want it to be a strike but it was. I knew it was up but I don’t know where it ended.” Jorge Castillo, “Dodger Reliever Madson Is Struggling Through the World Series,” Los Angeles Times, October 27, 2018. search-proquest-com.mcpl.idm.oclc.org/latimes/docview/2126136221/84D83AA3DF4449CDPQ/14?accountid=69.

11 Andy McCullough. Brock Holt, Boston’s “super-sub,” said of Pearce, “He’s been huge for us. He’s come up with big hits. He feels the moment. He knows when we need to get something going and he’s come through so much for us.” Nick Cafardo, “Pearce Simply Stole the Show,” Boston Globe, October 28, 2018: C16. Pearce had been a Red Sox fan growing up. After the World Series was over, he was named the World Series MVP.

12 The other was the 1993 Toronto Blue Jays in Game Four against the Philadelphia Phillies. The Blue Jays were down 14-9 after seven innings, scored six runs in the top of the eighth, and won 15-14.