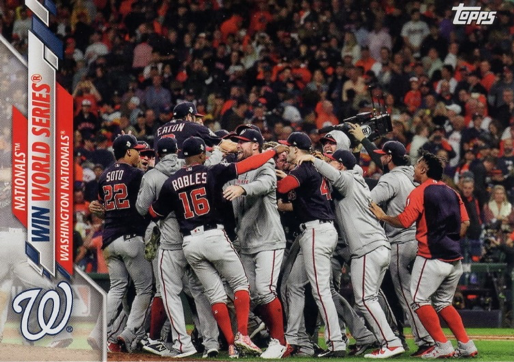 Could we have imagined October 2019? In baseball speak, the month began for the Washington Nationals on the very first day in the eighth inning with a challenged hit batsman, a walk, a shattered-bat bloop single, and a line drive that took a funky hop.2 Their Wild Card Game victory over the Milwaukee Brewers washed away the demons of postseason elimination games past. A monthlong transcontinental journey through the postseason was under way in earnest.

For fans experiencing postseason drama at the ballpark or fixated on the TV from a front-row seat, the emotions ran the gamut over the next month — anxiety and elation, resignation and relief, exhaustion and exhilaration. Now the train, sitting high above Minute Maid Park, marked the last stop. Thanks to Stephen Strasburg’s fifth postseason win in Game Six the night before, the World Series trophy was still up for grabs. One more late night. A World Series Game Seven was at hand — Zack Greinke versus Max Scherzer.

Greinke had a long record of postseason pitching since 2011 with the Brewers, Dodgers, and Diamondbacks, but his World Series debut came just a few days earlier as the Astros starter in the critical Game Three at Nationals Park. He pitched 4⅔ innings and was continually facing Nationals in scoring position, but managed to yield only one run and give the Astros a chance to win. They did, 4-1, to cut the Nationals’ World Series lead to two games to one.

Three days earlier, it would have been inconceivable that Scherzer would take the mound for a Game Seven. Scherzer was scratched from Game Five due to neck spasms and nerve irritation below his shoulder, but took the mound thanks to a cortisone shot and his intense competitiveness.3 Looking back, Scherzer started Game One at Minute Maid Park and survived a shaky first inning when the Astros took a 2-0 lead. But like Greinke in his start, Scherzer kept his team in the game despite throwing 112 pitches in just five innings. The Nationals came back to win 5-4 with Scherzer getting his third victory of this postseason for the early 1-0 World Series lead.

In Game Seven, Scherzer had to work hard for five innings — 103 pitches, four walks, and only three strikeouts. The Astros scored first in the second inning when Yuli Gurriel hit a solo home run. Scherzer faced runners in scoring position in the next three innings, but the fifth inning, his last, was the real test. Michael Brantley singled to right. After Scherzer struck out Alex Bregman and got Gurriel to ground into a force out at second base, he walked Yordan Alvarez. Carlos Correa’s single scored Gurriel for a 2-0 Astros lead, but Robinson Chirinos struck out swinging to end the Astros threat.

What about those last 15 pitches by Scherzer to Alvarez, Correa, and Chirinos? He has thought about those last 15 pitches and the adrenaline boost in his final effort during every game he has pitched since his college days. ‘It’s the most competitive inning,” Scherzer said of going deep. You absolutely got to bring it.”4 He did. Patrick Corbin replaced Scherzer in the sixth inning and retired the Astros with the benefit of a double play. Another Nationals pitching story was unfolding.

Meanwhile, the Nationals looked rather helpless against Greinke through the first six innings with a paltry offense — one single, one walk, and only one runner advancing to second base. Juan Soto singled to right in the second inning, but when Howie Kendrick grounded one in front of the plate, Greinke, the six-time Gold Glove Award winner, simply started a double play. When Kendrick worked a walk in the fifth inning and advanced to second on a sacrifice bunt by Asdrúbal Cabrera, Greinke induced a pop fly from Ryan Zimmerman to end the inning. But everything changed in the top of the seventh inning.

Greinke was facing the Nationals’ batting order for the third time, but under conditions of limited stress in those first six innings and a modest pitch count (67). With one out, Anthony Rendon came to the plate and the game was about to turn. So far in the postseason, Rendon had seven plate appearances in the seventh inning or later in the Nationals’ five elimination games, resulting in a walk, double, homer, double, homer, double, homer.5 On a 1-and-0 count, Rendon deposited an 89-MPH changeup into the Crawford Boxes in left field to cut the Astros’ lead in half.6 When Greinke walked Soto, his night was over in favor of reliever Will Harris. Did the Nationals and their fans feel a collective relief as Greinke walked off the mound? 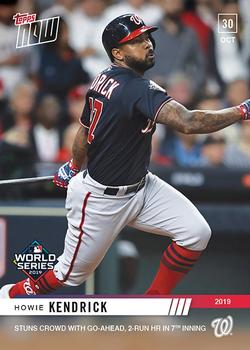 Harris was about to reprise his Game Six seventh-inning misfortune when he yielded a two-run homer to Rendon allowing the Nationals to widen their lead to 5-2. This time, Howie Kendrick hit a good, low 0-and-l pitch the opposite way down the right field line. CLANG and the Nationals took a 3-2 lead.7

Corbin came back out to pitch the bottom of the seventh inning. He had mixed results in the 2019 postseason both as a starter and a reliever, but manager Dave Martinez had a lot of confidence in the experienced lefty.8 Corbin retired the Astros, yielding only a single to Gurriel. He would get another inning, but not before the Nationals added to their lead against Roberto Osuna. With one out, Adam Eaton walked and stole second base. After Rendon flied out to center, Soto singled to right, scoring Eaton for a 4-2 Nationals lead. When Kendrick singled Soto to third, Ryan Pressly replaced Osuna on the mound to face Cabrera, whom he retired on a lineout to left.

Corbin was back out for the eighth inning with one job left — hold the Astros scoreless to get the ball to Daniel Hudson for the ninth inning. Corbin retired the Astros in order with a pitching line rewarding his manager’s confidence — three innings, two hits and three strikeouts.

The anticipation of the Nationals and their fans was building as they came to bat in the ninth against Joe Smith. Zimmerman singled but was out at second on Yan Gomes’ groundout. After Victor Robles singled and Trea Turner walked to load the bases, Jose Urquidy replaced Smith. Eaton singled to center and the Nationals had their final two runs, leading 6-2.

Hudson came in to pitch the home ninth. Three up and three down. The image of Brantley swinging at strike three and Hudson throwing his glove toward the Nationals dugout is indelible and the moment is stunning.9 The Washington Nationals are world champions, the title returning to Washington, DC, for the first time in 95 years!10 For the first time in baseball history, the visiting team won every game in a seven-game World Series. In fact, the Nationals were the first team ever to win four World Series games on the road.

In the immediacy of the victory, Washington Post columnist Barry Svrluga asked the relevant question: “How in the world did the Nats do that?”11 The eloquence of the journalists covering the Nationals for the Washington Post would soon follow.12 One way to specifically answer the question suggests a look at the metric Championship Win Probability Added, developed by Sky Andrecheck, measuring how much a particular play influences a team’s chances to win the World Series.13 Not surprisingly, three of the top four plays occurred in Game Seven — Kendrick’s two-run homer in the seventh (34.8%), Soto’s RBI single in the eighth (12.6%), and Rendon’s homer off Greinke in the seventh (10.7%).14

Of course in three days’ time, the parade down Constitution Avenue marked the World Series victory.16 It was a most joyous occasion. Everyone was a Nationals fan. One could not help but think back to June 2018 when a similar parade celebrated the Washington Capitals’ Stanley Cup triumph. On that occasion, the Caps brought the Stanley Cup to Nationals Park.17 Alexander Ovechkin threw out the first pitch to Max Scherzer before a Nationals’ 7-5 victory over the San Francisco Giants. The Caps players in attendance watched the entire game in a celebratory mood.

A marked affinity of the players of both teams for each other was clear. The day after their parade, the Nationals players and the Commissioner’s Trophy found their way to Capital One Arena for a hockey game.18 The Nationals players even got to parade around the ice, riding on a Zamboni!

The author accessed Baseball-Reference.com for box scores/play-by-play information (baseball-reference.com/boxes/HOU/HOU201910300.shtml) and other data, as well as Retrosheet.org (retrosheet.org/boxesetc/2019/B10300HOU2019.htm).

6 The Crawford Boxes are a section of seating in left field in Minute Maid Park that runs parallel to Crawford Street in downtown Houston.

7 “2019 World Series Game 7: Howie Kendrick go-ahead home run,” YouTube.com, November 1, 2019, youtube.com/watch?v=gghOhFBxFNA. The video shows Greinke staring from the Astros dugout. Was he wondering what might have been?

13 Sky Andrecheck, “Championship WPA: What Portion of a Title Did a Player Contribute?” BaseballAnalysts.com, April 4, 2009, baseballanalysts.com/archives/2009/04/championship_wp.php.