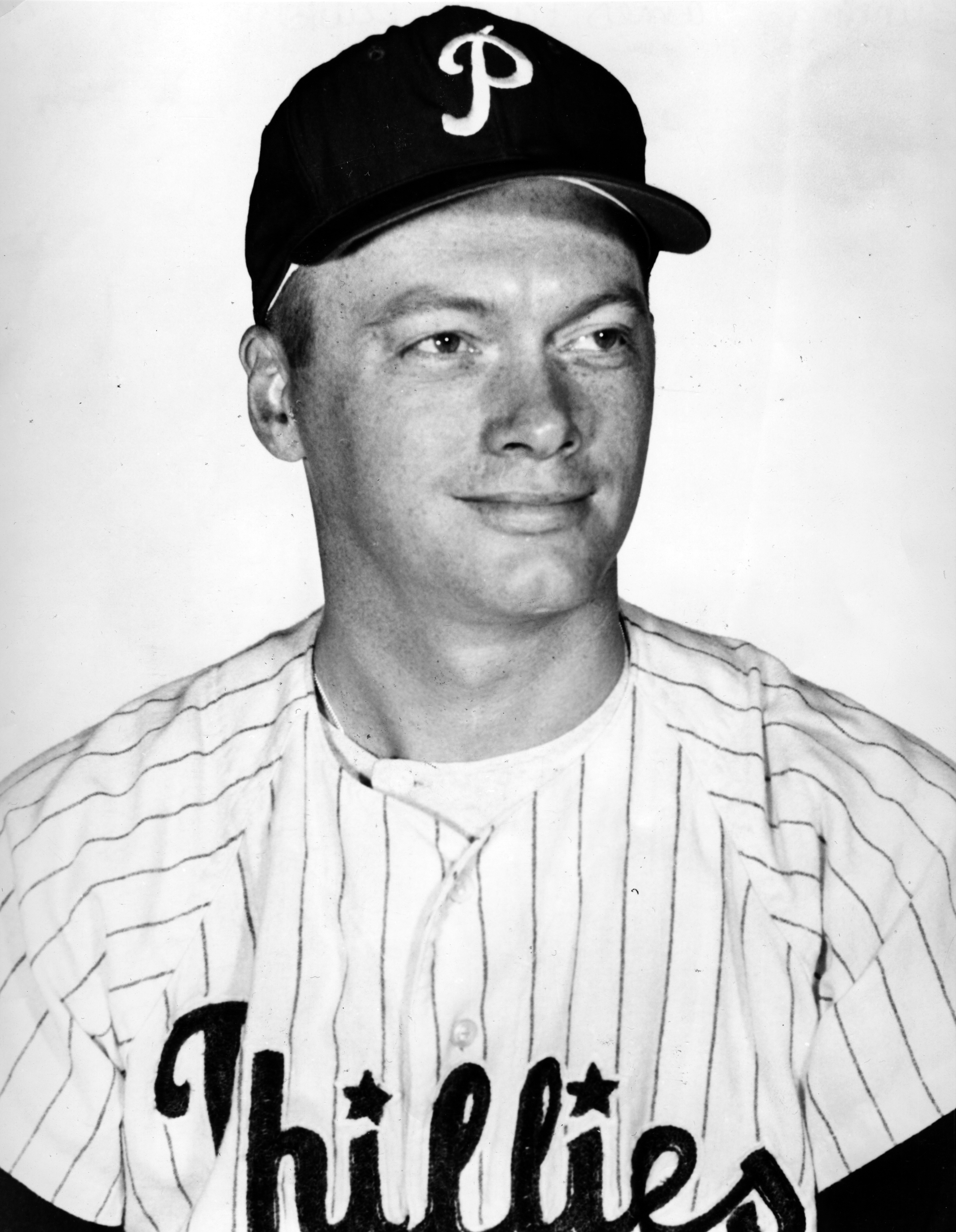 “This was the rarest of games,” wrote Frank Dolson of the Philadelphia Inquirer after the Phillies defeated the Cincinnati Reds to conclude one of the wackiest pennant races in NL history. “One team scored 10 runs and the other scored none. Yet both were losers. If anything, the team that scored the 10 runs took it worse.”1 A flabbergasted Allen Lewis, also of the Inquirer, declared, “I watched the most complete collapse of a first-place club in major league history. I’m still not certain it was not just a nightmare.”2

What a difference two weeks made! On September 20, the Phillies held a 6½-game lead over the Reds and St. Louis Cardinals with just 12 games to play, and seemed destined for their first pennant since 1950. Then the Reds, counted out since their beloved manager Fred Hutchinson took leave of the team on August 13 because of inoperable lung cancer, swept the Phillies in a three-game series in the City of Brotherly Love to kick off an improbable sequence of events. Skipper Gene Mauch’s Phillies ultimately lost 10 straight games and found themselves trailing the Reds by one game after the Reds took both games in a twin bill against the New York Mets on September 27 to extend their winning streak to nine games. With the Redbirds just a half-game behind the Phils, Commissioner Ford Frick began preparing for an unprecedented three-way tie for the pennant. The Reds seemed to have the upper hand, with their last five games at home, but they, too, stumbled. Heading into the season finale, they had lost three of four, the last of which was a 4-3 soul-crushing defeat to the Phillies.

On the final day of the season, the Reds and Cardinals (92-69) were tied for first place, leading the Phillies by a game. While the Reds and Phillies decided their fate in Cincinnati, the Cardinals (winners of 26 of their last 37 games) were at home to face the Mets, the worst team in baseball, who had taken the first two games of the series, setting the stage for a drama on the last day of the season. The Phillies and Reds undoubtedly hoped for another Mets miracle. The Reds could capture the pennant outright with a Mets victory; the Phillies victory coupled with a Mets win would result in a three-way tie, necessitating the first round-robin playoff in major-league history.

Mauch sent his workhorse, right-hander Jim Bunning, to the mound. The 32-year-old right-hander (and future US senator) with a 136-95 career slate was 18-8, but showed the signs of overwork. He had lost his last three starts and was making his 10th straight start on three days’ rest or less. Interim manager Dick Sisler raised eyebrows by calling on right-handed swingman John Tsitouris (9-12, 3.69 ERA), whose six-hit shutout of the Phillies started them on their epic collapse. Pundits questioned why hard-throwing Jim Maloney (15-10) did not get the call in the Reds’ most important game since the 1961 World Series. In a decision that would haunt him, Sisler claimed that Maloney “needed rest” after tossing 11 shutout innings four days earlier and would be used only in an emergency.3 With the pennant on the line, the game looked like an emergency to many.

Crosley Field was filled to capacity with 28,535 paid spectators, many of whom held transistor radios closely following updates from St. Louis.

The game was close for only two innings. In the third, the Phillies loaded the bases with one out on two walks, the latter intentional, sandwiched around rookie Dick Allen’s double. Cleanup hitter Wes Covington’s single, driving in Tony Gonzalez and Allen, sent Tsitouris to the showers. Tony Taylor slapped a two-out single off reliever Joe Nuxhall for the third Phillies run of the frame.

The Phillies rolled through seven Reds hurlers in what proved to be a laugher and their most lopsided victory of the season, equaling the score against the Chicago Cubs on April 24 at Connie Mack Stadium. The NL Rookie of the Year, Allen, led off the fifth with a towering home run over the center-field fence off Billy McCool to become the first Phillie with 200 hits in a season since Richie Ashburn (215) in 1958, and just the 17th rookie to do so. (AL Rookie of the Year Tony Oliva of the Minnesota Twins accomplished the feat on September 20.) It was also Allen’s major-league-most 125th run. Around this time, the scoreboard announced that the Mets were leading the Cardinals 3-2 in the fifth.

With a tie for the pennant oh-so-close, the Phillies came out swinging in the sixth, victimizing Joey Jay for four straight singles, the last of which, by Gonzalez, drove in two more to extend the Phillies’ lead to 6-0. Allen followed with a clout into the right-field bleachers, his 29th home run, plating three more. The Phillies 10th and final run came on Bobby Wine’s sacrifice fly scoring Taylor, who had led off the seventh with a double.

While the Phillies’ bats overwhelmed the Reds, there was “never an anxious moment” for Bunning, opined sportswriter Allen Lewis.4 In his distance-going six-hit shutout, Bunning only once permitted two runners on base in any inning. That was the seventh, when he yielded a leadoff single to Frank Robinson and issued his only walk of the game, a two-out free pass to Marty Keough. No Red reached third base. When he retired Keough to give the Phillies the victory in 2 hours and 28 minutes, there was little celebration as the scoreboard showed what everyone in the ballpark and all the players dreaded most: The Cardinals led the Mets 8-4 in the top of the eighth and seemed likely to capture their 10th pennant.

The Phillies’ collapse with 12 games remaining was historic, known forever after as the “Phold.” No team had ever squandered a 6½-game lead so quickly. In 1951 the Brooklyn Dodgers blew a six-game lead with18 games remaining, then lost a best-of-three playoff to the New York Giants; and 11 years later, the Dodgers blew a four-game lead with seven games left and likewise lost a playoff to the Giants, the clubs’ fifth season in California. Unlike the Dodgers, the Phillies had no shot at redemption with a playoff.

“If I knew how it was going to turn out, I might have done a couple of things different,” said Mauch testily in a low voice after the game.5 He was subsequently criticized for his overreliance on Bunning and southpaw Chris Short, who started 19 of the team’s last 33 games. Wes Covington, who had chafed under Mauch’s platoon system in left field, was livid. “It’s not how much we lost by. It’s the way we lost,” he said, then made reference to the Mets game. “You can’t ask for a miracle.”6 Ruben Amaro, a versatile utilityman and Gold Glove winner at shortstop in ’64, was in a state of shock, like many of the Phillies fans. “We couldn’t imagine anything like that happening to us. We had too good a ball club – with pitching, hitting and defense. What’s happened to us is unbelievable.”7 “It stopped snowing blue,” said backup catcher Gus Triandos, repeating a phrase he had coined earlier in the season to describe the Phillies’ success. “I don’t know what we could have done.”8

The Reds’ remarkable run at the pennant was for the most part overlooked by the media (at least outside of Cincinnati), given the remarkable Phillies’ “Phlop” and the Cardinals’ pennant and subsequent victory over the New York Yankees in the World Series. The Reds were average offensively, finishing fifth in scoring among the 10 NL teams; their 10-0 loss to the Phillies was the third shutout in their five-game homestand to conclude the season. Included was a heartbreaking 1-0 loss to the Pittsburgh Pirates in 16 innings on September 30 that knocked them out of a tie for first place.

The Reds’ locker room was strained of emotion and quiet following their season-ending loss, the players seemingly overcome by an emotionally laden season on and off the field. “Two weeks ago we didn’t have a chance for it,” said Chico Ruiz. “This week we lose it.”9 Former NL MVP and heart-and-soul of the club Frank Robinson was not about to make excuses: “We’ve got no one to blame but ourselves.”10

A game that began with the possibility of both teams involved in a three-team playoff for the pennant ended with both teams packing their bags for a long winter with thoughts of what could have been.

“There are no tomorrows here and in Philadelphia,” declared sportswriter Lou Smith in the Cincinnati Enquirer.11