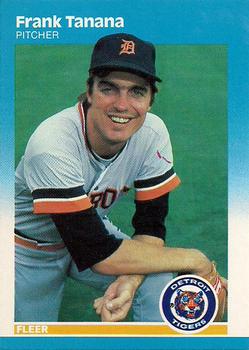 Sunday, October 4, 1987, was the culmination of the Showdown Series between the Detroit Tigers and the Toronto Blue Jays, the likes of which, given the wild card format, will not be seen in the regular season again.

The Tigers started the 1987 season 11-19, in sixth place in the American League Eastern Division, 9½ games behind the Milwaukee Brewers, who had started 13-0. Coming on the heels of a 9-20 spring training during which they looked terrible, it seemed that the door had closed on the team that amazed the baseball world in 1984 with its 35-5 start and its first World Series title since 1968. Despite the slow start to their season, a 10-2 stretch brought the Tigers’ record to .500, and on August 19 they climbed over the Blue Jays into first place for the first time. From mid-August, the Tigers and the Jays traded the division lead back and forth, and on September 23 Toronto was in first by half a game. The regular season would conclude with the two contenders facing off seven times in the final week and a half in what has become known as the Showdown Series — four games in Toronto, then a break while they played other clubs, and finishing with three games at Tiger Stadium.

It looked as though the series in Detroit might not mean anything. Toronto won the first three games at Exhibition Stadium, all by one run (4-3, 3-2, and 10-9). The Jays were leading in the fourth game 1-0 in the ninth, with ace closer Tom Henke on the mound, three outs from going up 4½ games, when Kirk Gibson led off the ninth with a homer to tie it up. The teams traded runs in the 11th before Gibson singled in the winning run in the 13th.

The Tigers were still alive, but barely, as Toronto was still up by 2½ games. Unfortunately for the Blue Jays, however, down the stretch Toronto suffered two key injuries. In the first game of the Showdown Series, MVP candidate Tony Fernandez broke his elbow landing on a piece of wood at the edge of the second-base cutout after being upended by Bill Madlock trying to break up a double play. Next, Detroit native Ernie Whitt broke some ribs trying to break up a double play against the Brewers on September 29. Toronto was swept at home by Milwaukee in that series,while Detroit split against Baltimore to set up the final weekend — Toronto up by one game with three to go. The Tigers won the first two games, so going into Game 162, they were up by one game. A Detroit win would give the Tigers the division by two games. A Toronto win would set up a one-game playoff on Monday at Tiger Stadium, since the Tigers had won a coin flip.

The Blue Jays made some changes to their regular lineup for this final game of the regular season. George Bell had been the number 4 hitter all season, but manager Jimy Williams moved him into the 3 spot for this game, and moved Jesse Barfield from his usual 6 slot up to number 5. With Whitt injured, Williams had September call-up Greg Myers catch the first two games of the series, but he went with veteran Charlie Moore in the final game. Cecil Fielder played first instead of Willie Upshaw. Manny Lee was at short for the injured Fernandez, as he had been ever since the injury, and with lefty Frank Tanana on the mound for Detroit, Garth Iorg played third instead of platoon partner Rance Mulliniks.

The Tigers’ lineup was their usual one against a lefty starter, in this game Jimmy Key. Mike Heath caught instead of Matt Nokes, and Larry Herndon was in right field in place of Scott Lusader. The only exception to the usual lineup was Jim Morrison at third in place of Tom Brookens, who had awoken at 2:30A.M. with vomiting and diarrhea and gone to Henry Ford Hospital. Brookens made it to the park for the game and put on his uniform, but never left the clubhouse.

The game did not look like a 1-0 classic early on. Tanana started Nelson Liriano 0-2 but walked him. Lloyd Moseby struck out for the first out on a fastball at the knees. George Bell stung the ball for a single to left, sending Liriano to second and giving Toronto two on with one out. All day, Tanana was unable to get his curveball over for strikes. However, Tanana got Juan Beniquez to strike out on a changeup and Barfield to hit a soft one-hopper to second for the third out.

The Tigers also got their first man on base, Lou Whitaker, on a solid single to right field, although it was apparent as Whitaker ran to first that his bad ankle was bothering him. After that promising start, Bill Madlock, a midseason acquisition from the Dodgers, hit a sharp grounder to third, producing a Garth Iorg-Liriano-Fielder around-the-horn double play. Kirk Gibson popped to Lee at short to end the first inning.

After a scoreless 1-2-3 top of the second, Alan Trammell led off the bottom of the second for Detroit. Amid chants of “MVP,” Trammell tried to get on with a bunt to the left side of the infield but hit it a bit hard to third baseman Iorg,who was playing in and threw Trammell out easily. Larry Herndon then hit a 2-and-1 pitch that looked as though it would land in left fielder Bell’s glove at the edge of the warning track, but it caught the wind and Bell could not back up in time to make a leap for the ball. It landed in the second row of the left-field seats and the Tigers led 1-0. It was the only fly ball to the outfield Key would allow all day.

Tanana was in danger of giving up that lead in the next two innings. The third started with a single by Charlie Moore, as Tanana had still not gotten a curveball over the plate. Nelson Liriano swung through a changeup for the first out but with Lloyd Moseby up, a bouncing curveball got past catcher Mike Heath, sending Moore to second. Moseby eventually struck out, and after the Tigers intentionally walked George Bell, Beniquez hit a one-hopper to short for a fielder’s choice to end the inning.

In the fourth with one out, Cecil Fielder hit a solid liner just past Jim Morrison for a single. The next hitter was Manny Lee, and Jimy Williams put on the hit-and-run. However, Williams noticed that Lee had missed the sign and he took off the hit-and-run. Fielder missed the change and was thrown out at second. Lee then hit a triple to right field that bounded off the wall past right fielder Larry Herndon and would have tied the game but for the earlier snafu on the basepaths. Garth Iorg hit a can of corn to Chet Lemon in center to strand Lee at third.

Fielder led off the top of the ninth. After starting off 1-and-2, he worked the count full before swinging through a Tanana fastball for the first out. Manny Lee was next, and he hit a one-hopper to defensive replacement Jim Walewander at third. Walewander held the ball a bit long, and his subsequent rushed throw to first was in the dirt, but first baseman Darrell Evans scooped the ball for the second out. With two out and nobody on, Garth Iorg swung at the first pitch and hit a tapper between the mound and first base. Tanana dashed over, grabbed the ball, turned 270 degrees clockwise and underhanded the ball to Evans. The toss was right on the mark, and the Tigers had won the division.

As the Tigers celebrated to the left of first base, Lou Whitaker grabbed second base out of the ground. He would give it to double-play partner Alan Trammell with the following inscription “To Alan Trammell, MVP, 1987. Congratulations, Louis Rodman Whitaker.” (The writers, however, voted the award to George Bell.) The police presence worked as few fans ran on the field.

The Showdown Series was an incredible seven games. All seven games were decided by one run, three were walk-offs, and in all but the last game, the team that scored first lost the game. The Tigers’ 98-64 record was the best in baseball, but after these exhausting games, the Tigers ran out of gas against the Minnesota Twins in the playoffs, losing four games to one.