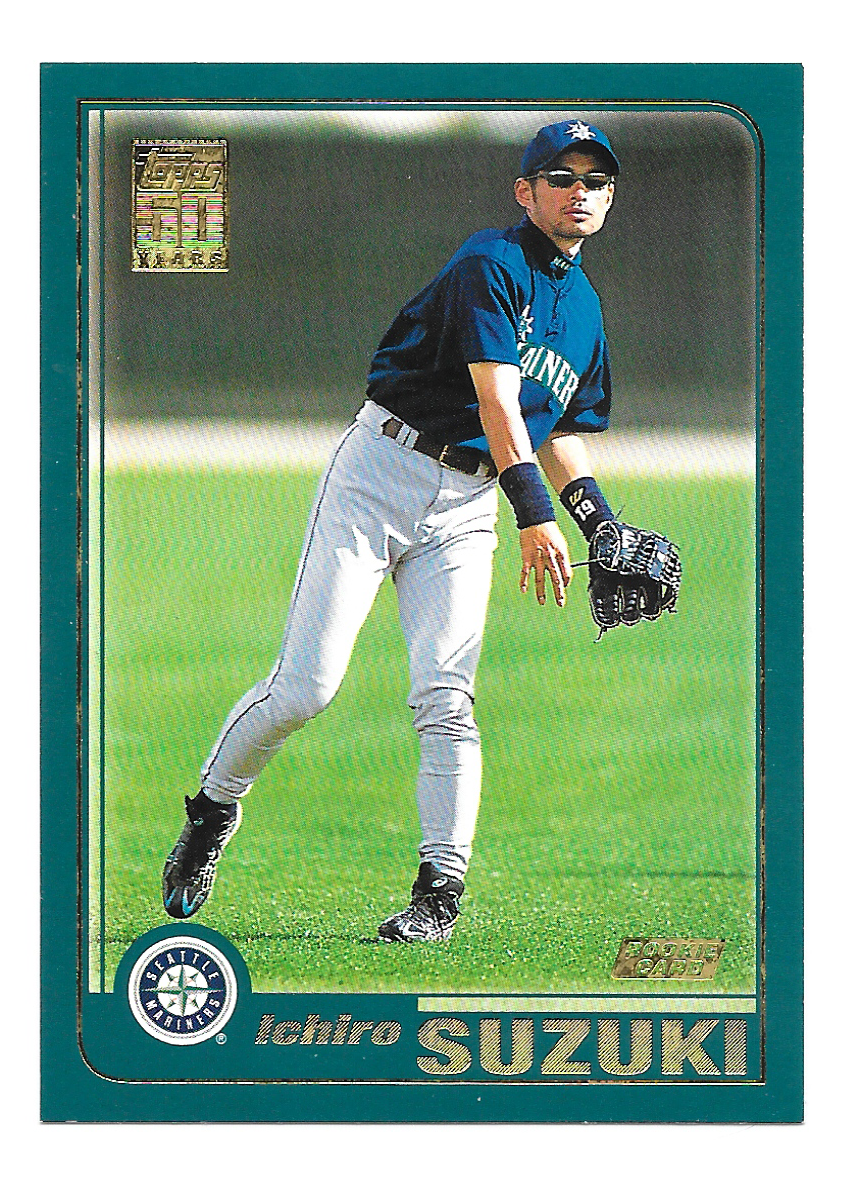 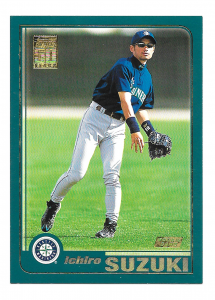 Despite the Seattle Mariners having made three playoff appearances in the previous six years, expectations for the team were tempered heading into the 2001 season. An aging roster, the oldest in the American League, had been stripped of three superstars in a tumultuous 2½-year span.

First, a 1998 trade-deadline deal with the Houston Astros had sent Randy Johnson packing. Little did the Mariners know that the 34-year-old flamethrower still had 11 years and four Cy Young Awards left in him. Ken Griffey Jr., generally regarded as the best player in baseball, had demanded a trade in the fall of 1999, and Seattle obliged by dealing the slugger to the Cincinnati Reds in February of 2000.1

Perhaps the most significant loss, however, was 25-year-old Álex Rodríguez, who became a free agent at the end of the 2000 season and chose to sign with the Texas Rangers. Rodríguez inked a 10-year, $252 million contract, which was twice as lucrative as any other previous contract in a team sport.2 The relatively frugal Mariners didn’t stand a chance in those negotiations, and so the team was forced to improvise to stay in the hunt for a playoff spot.

Seattle general manager Pat Gillick made a bold move to bolster the team’s fortunes in November of 2000 by signing Japanese sensation Ichiro Suzuki to a three-year contract. The 27-year-old outfielder, who was so famous that he was known simply by his first name, had won seven consecutive Pacific League batting titles. Yet many North American fans doubted that the major leagues’ first Japanese-born position player would make much of an impact. They couldn’t have been more wrong. Ichiro didn’t just replace Rodríguez as the biggest baseball celebrity in the Emerald City, he posted a breathtaking 2001 season that saw him win the AL batting title, Rookie of the Year, and MVP awards, and lead the majors in steals.

One month after landing Ichiro, Gillick signed slick-fielding free agent Bret Boone to a one-year deal, a seemingly unremarkable move at the time. “He’s a proven run-producer who will add a little pop to our lineup while providing solid defense for our pitching staff,” Gillick predicted.3 Boone provided more than a “little pop” in 2001. The flamboyant 32-year-old delivered a career year at the plate that ranked among the very best of all time for a second sacker.4 As of the end of 2018, the 141 runs that he drove in still stood as the most RBIs in a season for an American League second baseman.

The surprising Mariners were quick out of the gate to start the season, and they never looked back. Their 20 wins in April set a major-league record, and they held a commanding 19-game lead in the AL West standings by the time they hosted the All-Star Game at Safeco Field. A grand total of eight Seattle players suited up for that midsummer classic, including four starters: Suzuki, Boone, John Olerud, and Edgar Martínez.

The Mariners continued to steamroll their opponents in the second half of the season, and their magic number for winning the AL West was whittled down to two by September 11. However, Seattle never got a chance to clinch on that fateful day, as the major leagues shut down for a week after the 9/11 terrorist attacks. When the Mariners sealed the division title eight days later, their record stood at an impressive 106-40 with 16 games remaining on the schedule. Amazingly, they still hadn’t lost a series all year.5

Rather than coast into the playoffs, Seattle made a run at breaking the single-season record for wins, which was set in 1906 when the Chicago Cubs, led by Frank Chance and Mordecai “Three Finger” Brown, won 116 games. Despite winning only seven of their next 12 contests, the Mariners still had a shot at breaking the Cubs’ record by sweeping the final four games of the season against the last-place Texas Rangers.

Brett Tomko got the start in the series opener against Texas. The 28-year-old right-hander, who came to Seattle as part of the Griffey trade, was making his first start for the Mariners since April 18 after spending most of the season in Triple A. The Rangers countered with Aaron Myette, a youngster with an unsightly 6.61 ERA from nearby New Westminster, British Columbia. Myette’s struggles on the mound weren’t out of the ordinary for the 2001 Rangers – the team entered the game with a staff ERA of 5.68, easily the worst in all of baseball.

The Mariners scored early and often against Myette. In the bottom of the first inning, Al Martin, filling in at DH for a suspended Martínez, knocked in a pair of runs with a double to right field.6 Backup catcher Tom Lampkin followed that up with another double to bring home Martin and Mike Cameron, and the Mariners were quickly up 4-0.

Ichiro ran his hitting streak to 11 games by laying down a bunt single for his 240th base hit of the season in the bottom of the second inning. He picked up two more hits in the series against the Rangers to give him 242 for the year, the most hits in the majors since 1930.7 The Mariners extended their lead to 6-0 on an RBI groundout by Mark McLemore and a two-out double by Olerud that chased Myette from the game after he recorded only five outs.

The Rangers scored their only run of the evening in the top of the third inning when Rodríguez hit a solo home run off Tomko for his 200th hit and 52nd round-tripper of the season. While many fans might have taken offense at his hefty contract, few could argue that Rodríguez wasn’t one of the best players in the game; the homer off Tomko put him into an elite group with Babe Ruth, Hack Wilson, and Jimmie Foxx as the only players to record 50 home runs and 200 hits in a season.8

Seattle scored two more runs in the bottom of the third inning on an RBI groundout by rookie infielder Ramón Vázquez and a line-drive RBI single by McLemore. In the fourth inning, the Mariners tallied four more runs to widen their lead to 12-1. Lampkin slammed his second two-run double to give him four RBIs in the game, and then Vázquez drove him home with a single to center field. With one out, McLemore collected his third RBI of the game on a groundout that brought in Vázquez.

The score remained 12-1 until the bottom of the seventh inning, when Ed Sprague doubled home Charles Gipson with a drive down the left-field line. With two outs in the bottom of the eighth, 37-year-old Jay Buhner, who had replaced Ichiro in right field two innings earlier, slugged a two-run shot for his first home run of the season.9 Sprague knocked in McLemore with a hit to make the score 16-1, and then José Paniagua retired the Rangers in order in the ninth inning to secure the Mariners’ 114th victory of the season, tying them with the 1998 Yankees for the most wins in American League history. “I hope people realize what we just did,” said standout reliever Jeff Nelson. “A few years ago, this was a team in the Northwest that nobody would have heard of without Ken Griffey Jr. Now, it’s won 114 games.”10

The 16-1 blowout win, their second in a six-week span, was by no means out of character for the 2001 Mariners.11 It was the 23rd time the team had racked up 10 or more runs in a game, and 59 of their victories that season were by at least four runs, a major-league record that still stood as of the conclusion of the 2018 season.

“I think the records are pushing us,” admitted Lampkin after win number 114. “Guys are busting their behinds like it’s April and May. We don’t want to let up.”12 The Mariners won the next two games against Texas to match the 116 victories of the 1906 Cubs, but they fell short of breaking the record on the last day of the season when a ninth-inning rally by the Rangers handed them a 4-3 defeat.

Seattle appeared to have momentum heading into the playoffs, although their late-season quest for the wins record may have hurt them. They had to rally in the Division Series to squeak by Cleveland, a team with 25 fewer regular-season wins. In the ALCS, they were no match for the three-time defending World Series champion Yankees, who easily dispatched them in five games. It was a bitterly disappointing end to the most successful season in Mariners history, and, unfortunately for baseball fans in the Pacific Northwest, the window of opportunity for their veteran team had slammed shut. As of the end of 2018, the Mariners still hadn’t returned to the postseason, a playoff drought that was the longest in the four major professional sports in North America.13

1 Seattle acquired Mike Cameron, Brett Tomko, and minor leaguers Antonio Pérez and Jake Meyer in return for Griffey. Although the consensus at the time was that the Reds had taken advantage of the Mariners in the swap, history would prove otherwise. Griffey was 30 years old when he was dealt, and his best days were behind him. Because of a string of injuries, he would only be worth a cumulative 13.1 bWAR (Baseball Reference Wins Above Replacement) for the remainder of his career. The key figure in the trade, a 27-year-old Cameron, was just entering his prime, and his salary was a fraction of Griffey’s. Cameron played a significant role in Seattle’s 2001 AL West title, and he went on to post a cumulative 35.2 bWAR in his remaining 12 major-league seasons.

5 The Mariners lost only one series in the entire regular season. They were swept in a three-game set in Oakland on September 21-23, 2001.

6 Edgar Martínez was serving the second game of his two-game suspension for charging the mound after being hit by a pitch from Lou Pote of the Anaheim Angels on October 2.

7 In the 1930 season Bill Terry of the New York Giants got 254 hits, while Chuck Klein of the Philadelphia Phillies had 250. Ichiro went on to set the all-time single-season record for hits with 262 in 2004, a mark that has not been surpassed as of the end of the 2018 season.

9 Jay Buhner was a fan favorite in Seattle for 14 seasons. He missed most of 2001 with a torn arch in his left foot and was forced to retire at the end of the season after a series of injuries.