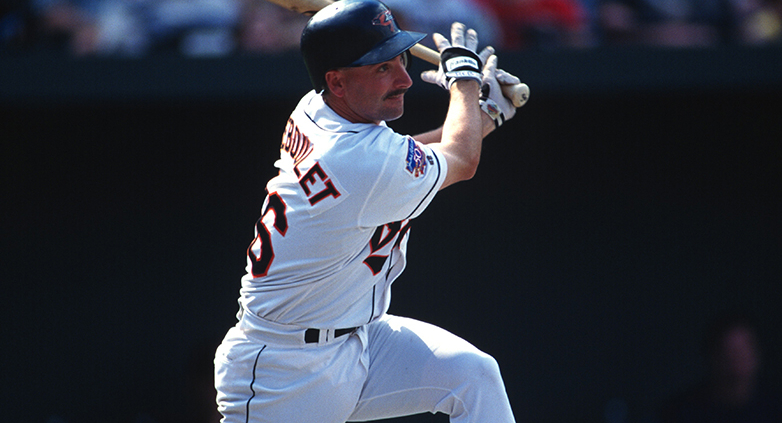 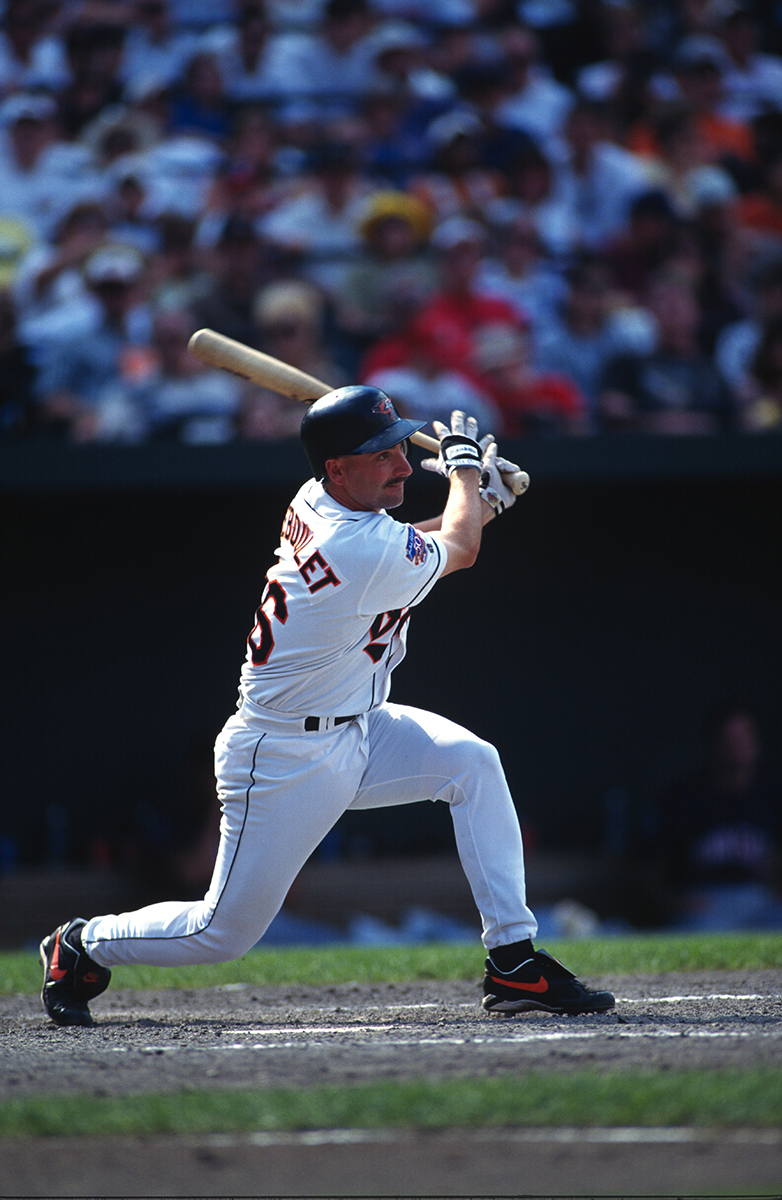 The Baltimore Orioles returned to the postseason for the second straight season in 1997. They did it in style, winning the American League East championship by two games over the New York Yankees.

There was some bitterness from the season before when Baltimore met the Yankees in the LCS. In Game One, at Yankee Stadium, the Orioles were clinging to a 4-3 lead heading into the bottom of the eighth inning. With one out, Derek Jeter lifted a fly ball to right field. Tony Tarasco, who had just come into the game, went back to the wall to make the catch. But a fan reached over the wall attempting to catch the ball. The fan made contact with the ball, which caromed into the stands. Right-field umpire Richie Garcia ruled the play a home run, when clearly, at least from the Orioles’ perspective, the ball should have either been caught for an out or the batter called out for fan interference. Orioles skipper Davey Johnson argued the call, or no-call in this instance, and was ejected by Garcia. The Yankees went on to win, 5-4, in 11 innings.

Although the Orioles came back to win Game Two, the Yankees swept the Orioles in the next three games at Camden Yards. The Orioles felt that a 2-0 lead going home would have made a huge difference in the series. And to lose Game One by such a blatant no-call, the Orioles felt, would gnaw at the club and its fans the whole offseason.

But the 1997 season was a new chapter and the Orioles beat the Yankees eight out 12 times. The Yankees secured the wild-card berth and it looked as though the Orioles might get another shot at their longtime nemesis in the postseason.

But the Orioles would need to get past the Seattle Mariners in the Division Series to get another shot at the Yankees. New York was pitted against AL Central champion Cleveland in the other Division Series.

Beating Seattle was going to be a tough hurdle to overcome. The Mariners beat out Los Angeles by six games in the AL West. They were a hitting machine, featuring six players with 20 or more home runs. They were led by Ken Griffey Jr. (56 home runs, 147 RBIs, and a .304 batting average). He was later named the league’s MVP by the baseball writers, and the major leagues’ MVP by The Sporting News.

Game One of the LDS at the Kingdome was a matchup of future Hall of Famers. Randy Johnson (20-4, 2.28 ERA, 291 strikeouts) took the hill for Seattle, facing Baltimore’s Mike Mussina (15-8, 3.20 ERA, 218 strikeouts). Mussina went seven strong innings, giving up two earned runs and whiffing nine, while Johnson went five innings and surrendered five earned runs. The Orioles broke the game open when they scored four runs in the fifth and sixth innings, and coasted to a 9-3 victory.

The 9-3 score also prevailed in Game Two. Scott Erickson started for Baltimore and went 6⅔ innings. His counterpart for Seattle, Jamie Moyer, was not as fortunate and went 4⅔ innings. Each pitcher gave up three earned runs, and the outcome was left in the hands, and arms, of the bullpens. Brady Anderson’s two-run home run in the seventh and a four-run eighth by the Orioles broke the game wide open for Baltimore.

The series shifted to Camden Yards for Games Three, Four, and Five. In a battle of left-handers, Seattle’s Jeff Fassero outdueled the Orioles’ Jimmy Key, and the Mariners put a hold on their winter holiday with a 4-2 win. Solo home runs by Jay Buhner and Paul Sorrento provided the margin of victory for Seattle.

Game Four was a rematch of the starters for Game One. The 48,766 in attendance badly wanted a win, but it was a tall order indeed. Johnson wasn’t given the moniker the Big Unit for no reason. The 6-foot-10 left-hander was as good as they come. Would the Orioles be able to beat him a second time in a short series? The Baltimore fans were licking their chops in anticipation of a rematch with the Yankees. “Fate will have us play the Yankees,” said Orioles fan Paul Quattrochi. “Last year we got ripped off.”1

The Mariners failed to score in the top of the first inning, and up to bat came the Orioles, Johnson whiffed Anderson to start the frame. Jeff Reboulet stepped into the batter’s box. He was starting at second base in place of Roberto Alomar. The switch-hitting Alomar was nursing a strained shoulder, making it difficult to swing right-handed against Johnson.

As the afternoon sun cast shadows around home plate, Reboulet just looked for a pitch to hit. He found one and sent the baseball over the left-field wall for a home run and a 1-0 lead. “I just kind of looked for a good pitch to hit,” said Reboulet, “just trying to get a strike and put the bat on the ball and take a good swing. I don’t even know if it was in or out or where it was. I was just trying to react to it.”2

While Reboulet’s homer brought some fireworks, the Orioles were not finished. Geronimo Berroa followed with a double to right field. Johnson fanned Eric Davis, but Cal Ripken Jr. singled to right field to score Berroa and the Orioles led 2-0 after one inning.

The Mariners sliced the Orioles’ lead in half when Edgar Martinez homered off Mussina to begin the second inning.

The two hurlers then took over the game, mowing down the opposing lineup. Johnson was especially effective. He shook off the first inning and responded with seven strike outs in the first four innings. He made it nine when he whiffed the first two batters in the bottom of the fifth, but Berroa extended the O’s lead to 3-1 with a home run to right field. “I don’t know how I hit that fastball,” said Berroa. “At that time of day, there are a lot of shadows and you can’t even see the ball. I got lucky.”3

Mussina set down the Mariners in order in the sixth and seventh innings, then Davey Johnson turned matters over to the bullpen. Armando Benitez worked a scoreless eighth inning. Randy Myers, who led the AL in saves with 45 during the regular season, did what he got paid to do. Seattle went down 1-2-3.

The final score was Baltimore 3, Seattle 1. The Orioles were going back to the ALCS. Mussina went seven innings, giving up two hits, striking out seven, and walking three. “Mike is such a great pitcher, I knew he’d give me a quality start,” said manager Johnson. “Mike rose to the occasion. He just pitched a great game. I’ve never seen him pitch bad in a big game.”4

His counterpart was no slouch. Randy Johnson pitched eight innings, striking out 13. “I’d like to congratulate Baltimore for a great year,” said Seattle manager Lou Piniella. “The Orioles have been the dominant team in the league all year, and that was reflected in this series.”5

But the celebration by the Orioles was short-lived. They did not get another shot at the Yankees, as the Indians defeated New York in five games. Cleveland also got the best of the Orioles, beating them in six games to win the AL pennant, their second in three years.