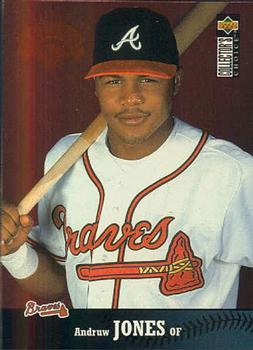 As the 2001 season entered October, the Atlanta Braves were in first place in the National League East. The team’s position in the standings was hardly remarkable – its roster was laden with talent, and it had captured nine straight division crowns – but with only a handful of games left in the season, it had yet to win the division.

It had also uncharacteristically floundered at times. The team was below .500 as late as May 27, and it trailed the Philadelphia Phillies by as many as eight games at one point. However, the Braves played much better baseball over the last two-thirds of the season and eventually passed the Phillies, although the race between the two teams remained close. The Braves nearly clinched the division when they took two out of three from the Phillies at Atlanta’s Turner Field in early October.

With the Florida Marlins (75-84) coming to town for a three-game series beginning on Friday, October 5, the Braves (86-73) needed only a Braves win or a Phillies loss to capture the division title for the 10th straight time.1

Although the Braves would get that win in dramatic fashion in the first game of the series, the results did not look promising initially. Starting pitcher Kevin Millwood, who entered the game with a 6-7 record and a 4.30 ERA, endured a rough top half of the first. After getting the Marlins’ leadoff hitter, second baseman Dave Berg, to fly out to center fielder Andruw Jones for the first out, Millwood gave up a single to first baseman Derrek Lee and walked left fielder Cliff Floyd. He then served up a home run on his first pitch to center fielder Preston Wilson. Millwood next walked third baseman Mike Lowell, but he got out of the inning by inducing right fielder Kevin Millar to ground into a double play.

The 29,299 fans in attendance did not have to wait long for the Braves to wipe out the 3-0 deficit. From the first pitch, Marlins starting pitcher Ryan Dempster (15-11, 4.66 ERA) could not find the strike zone. He walked second baseman Marcus Giles and first baseman Julio Franco in quick succession, throwing only one strike between the two batters, and then, with one strike on third baseman Chipper Jones, uncorked a wild pitch, allowing the runners to advance. Dempster walked Jones on a 3-and-2 count to load the bases. He then struck out right fielder Brian Jordan and got Braves left fielder B.J. Surhoff to fly out to center, but not before going to a full count on the latter. Giles tagged on Surhoff’s drive to score the Braves’ first run.

With two outs on the books, it seemed that Dempster might get out of the inning, but his travails were just beginning. Still laboring to find the strike zone, he issued a four-pitch walk to Andruw Jones and then gave up a single to shortstop Rey Sánchez – on yet another 3-and-2 count. Franco and Chipper Jones scored on the hit to tie the score and Andruw Jones took second. Dempster next walked catcher Paul Bako, bringing Millwood to the plate with the bases loaded. Under normal circumstances, the weak-hitting Millwood would have posed little threat – his batting average hovered around .100 entering the contest – but these were not ordinary circumstances for Dempster. His command completely betraying him, he walked the Braves hurler on four pitches, forcing in the go-ahead run from third. At this point Marlins manager Tony Perez removed Dempster in favor of reliever Benito Baez. All told, Dempster had thrown 45 pitches, only 14 of them for strikes.

Baez began exactly where Dempster had left off: He walked the first batter he faced, Marcus Giles, on a 3-and-2 count to force in the runner from third. After allowing a single to Franco that drove in Bako, Baez faced Chipper Jones with the bases still loaded. Jones worked the count full before blasting a Baez pitch into the left-field stands for a grand slam, pushing the score to 10-3. Brian Jordan hoped to add to the total, but Baez struck him out – on the sixth 3-and-2 count of the inning no less – to finally retire the Braves. The 10 runs scored in the inning were the most runs put on the board by the Braves in the first inning since the then-Milwaukee Braves scored 10 in the first against the Pittsburgh Pirates on June 12, 1953.2

The hefty lead seemed to settle Millwood down. Indeed, he held the Marlins scoreless over the next five innings. Baez, meanwhile, stayed in the game and pitched a scoreless second but ran into trouble again in the third. He surrendered a hit to Bako to open the inning and then, with one out, gave up a two-run home run to Giles to make the score 12-3. After Franco followed with a single, Chipper Jones sent a Baez pitch deep into right-center field, beyond the reach of Preston Wilson. The drive fell in for a triple, scoring Franco. Brian Jordan then redeemed himself from his earlier strikeouts with a double to bring in Jones. That hit spelled the end of the night for Baez, who gave way to right-hander Juan Acevedo. This pitching change failed to end the Braves’ onslaught, however. Acevedo surrendered a single to B.J. Surhoff and then unleashed a wild pitch with Andruw Jones at the plate to allow Jordan and Surhoff to advance. Jones flied out for the second out, but his drive was deep enough to score Jordan from third for the Braves’ 15th run. Acevedo brought the inning to a merciful close by getting Sánchez to ground out to short.

Avecedo and bullpen mates Blaine Neal and Ricky Bones held the Braves scoreless over the next four innings. With Marlins batters failing to chip into the lead in the seventh and eighth innings against reliever Kerry Ligtenberg, Tony Perez essentially ceded the game to the Braves by putting position player John Mabry on the mound in the bottom of the eighth. If Mabry thought the Braves intended to take it easy on him because of the score, he was quickly disabused of that notion. In quick succession, Mabry gave up a single to Brian Jordan and walked B.J. Surhoff and Andruw Jones to load the bases. Rey Sánchez drove in Jordan with a single to right to make it 16-3. Mabry walked Bako to force in another run and yielded a single to Dave Martinez, who was pinch-hitting for Ligtenberg, to bring in still another. He finally recorded an out when Marcus Giles hit into a fielder’s choice, but a run scored on the play, increasing the score to 19- 3. Despite the out, Perez at this point gave up on Mabry and moved him to right and called Vic Darensbourg out of the bullpen to try to stop the drubbing. Darensbourg allowed a single to Julio Franco to make it an even 20 runs for the Braves, but the rout came to an end at long last when he got Chipper Jones to hit into a double play.

Braves reliever Steve Reed set the Marlins down in order in the ninth. With that, the Braves put their 20-3 blowout win in the books and, even more significantly, laid claim to their 10th straight division title. The 10 straight titles (the strike year of 1994 is excluded) bested the US professional sports record of nine straight division championships, shared by the Boston Celtics (1957-1965) and the Los Angeles Lakers (1982-1990).3

After the game, Braves general manager John Schuerholz was effusive in this praise of the team: “It’s a magnificent accomplishment. No other professional sports team in any sport has ever done what we’ve accomplished. We’re very proud, very honored, and thrilled by it.”4 The Braves went on to win 14 consecutive titles, but arguably none of those 14 was won in as dramatic fashion as the 10th.

In addition to the sources cited in the notes, the author consulted Baseball-Reference.com and backtobaseball.com.