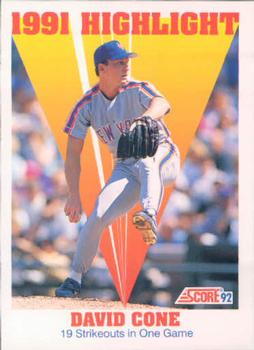 It was a rough September 1991 for David Cone. The Mets right-hander had been sued for $8.1 million by three women who claimed that he had threatened them at Shea Stadium in August. Cone admitted to confronting the women but denied threatening them. “In a span of 15 seconds I must’ve dropped 90,000 F-bombs. I’m not proud of what I did, but it was a farce of a lawsuit, to get publicity,” he said when the news broke.1

The lawsuit was clearly a distraction to Cone as he lost four of the six games he started through October 1. The losses dropped his season record to 13-14 as the Mets headed to their first losing season since 1983.

Although the Mets were out of the pennant race, several members of the team threw a party before the final game of the season, in Philadelphia. Cone was scheduled to pitch the game but he still partied all night before returning to the hotel in the early-morning hours. Several hours later, Mets management informed Cone that he had been accused of rape and that he could be arrested at any time.2

Cone told Mets manager Mike Cubbage that he wanted to pitch and Cubbage gave him the nod to take the mound. Although he managed to stay focused on the game, Cone said later that in between pitches, he kept one eye on the stands for the police who might have shown up to arrest him.3

The Mets showed no ill effects from their night of partying. Daryl Boston led off the game with a triple off Phillies starter Andy Ashby and scored when the next batter, Keith Miller, doubled. Miller moved to third on a fly ball by Kevin McReynolds and scored on Gregg Jefferies’ single. Jefferies moved to second on a wild pitch and scored the Mets’ third run when Chris Donnels singled. The Mets quickly had a 3-0 lead.

In the bottom of the first, Cone struck out leadoff batter Kim Batiste. After walking Mickey Morandini, he struck out Wes Chamberlain and Dale Murphy. The second inning was not much different. After giving up a double to Dave Hollins, Cone struck out the next three Phillies batters, bringing his total to six.

Cone continued to stymie the Phillies bats. He picked up his seventh strikeout in the third and added three more in the fourth. Cone said later that he found himself feeling stronger and able to push aside his troubles as each inning passed and his strikeout total climbed. “If anything, it made me stronger,” he said. “It gave me a cause. Either fold or get mentally strong, that’s how I was thinking. I chose to get strong.”4

The Mets added another run in the third inning on consecutive singles by McReynolds and Jefferies. In the top of the fifth, Miller hit a solo home run. Cone now had five runs to support his mound performance.

He struck out two of the three batters he faced in the bottom of the fifth. He now had 12 strikeouts through the first five innings. “I established the strikeout zone with the fastball early [a]nd so throughout, I got them to chase a lot of pitches that were out of the zone,” he said after the game.5

In the bottom of the sixth, Cone struck out Jim Lindeman and Batiste before giving up his second hit of the game, a single by Morandini. But Cone ignored the baserunner and got Chamberlain to strike out for number 15. “His fastball was so good, it was on you before you realized it,” Chamberlain said of Cone’s command of his pitches.

The Mets added another run in the seventh inning when reliever Bruce Ruffin gave up a double to Miller. Miller came home three pitches later when Howard Johnson hit a single in the hole on the right side. They scored one more run in the ninth when Miller hit his second solo home run of the afternoon to give the Mets seven runs for the game.

Cone failed to get a strikeout in only the seventh inning. Instead he got the three Phillies he faced to fly out, one on a foul pop to the first baseman and the other two to right field. Cone resumed adding to his total in the eighth inning when Braulio Castillo and Doug Lindsey swung at pitches and missed.

With a secure lead, Cone went to the mound to finish the game in the ninth. He struck out Batiste on three pitches. Morandini struck out swinging with the count full. Cone now had 19 strikeouts to match the National League record set by Steve Carlton in 1969 and Tom Seaver in 1970. Nolan Ryan also struck out 19 in a nine-inning game in the American League in 1974 when he was with the Angels.

Cone needed just one more strikeout to match Roger Clemens’ record of 20 strikeouts in a nine-inning game. Clemens set the mark when he was with the Red Sox in 1986.

Chamberlain stepped to the plate. He had been a strikeout victim on his three prior times at bat. Chamberlain swung at Cone’s first pitch and missed. He connected on the second pitch for a double to right field. It was the Phillies third hit of the game.

Dale Murphy now entered the batter’s box. He had struck out twice. After missing once, Murphy connected and hit the ball to shortstop Jeff Gardner, who made an easy throw to first for the final out.

Cone had thrown 141 pitches. Eighteen of the Phillies’ strikeouts came on swings and misses. Although he had not tied Clemens record, Cone finished with 241 strikeouts for the season, tying Clemens for the major-league lead.

When Cone was asked if he thought about the strikeout record as he got close, he said, “It was, during the game, the same sorts of emotions as you experience when you are trying for a no-hitter. But am I in any way disappointed by missing 20? No. I realize one doesn’t get in the position often, even ever. But the silver lining is that 19 is still a record for the NL. I’ll be in the book.”6

The win gave Cone a 14-14 record for the season, his worst since he became a Mets starter in 1988. “It doesn’t make up for the season [b]ut it gives you something to look forward to,” he said.7

Cone would have little time to enjoy his performance. The rape charges were still hanging over him. He wouldn’t learn for another 72 hours that the police determined that the woman’s claims were “unfounded” and dropped the probe. In the meantime Cone hid out in his apartment in order to avoid the New York press.8