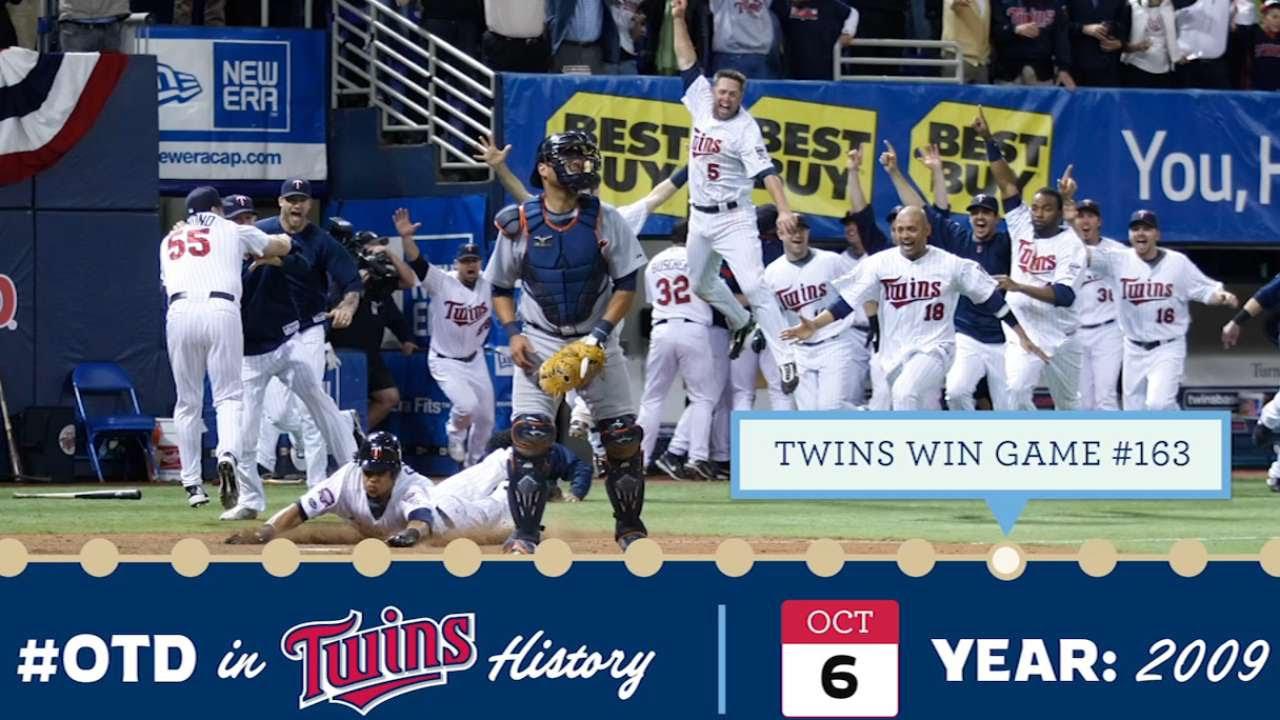 Fans in Minnesota were not always thankful for indoor baseball, but on a 44-degree, rainy October afternoon, the 54,088 that jammed the Hubert H. Humphrey Metrodome were glad to be inside as the Minnesota Twins squared off against the Detroit Tigers in an unlikely Game 163 matchup to decide the AL Central Division — the final regular-season game in the 28-year history of the ballpark.

The Twins’ September march to Game 163 was unexpected and improbable. The Tigers had led the division by seven games in early September and were ahead by three games with just four to play. The Twins rode the hot bats of Michael Cuddyer, Jason Kubel, and veteran Orlando Cabrera to deadlock with Detroit and force a Game 163 despite missing slugger Justin Morneau with a back injury.

Tigers’ All-Star Miguel Cabrera entered the game in a cloud of controversy. Over the final weekend of the season, it was reported that Cabrera was involved in a domestic incident. Unaffected by distractions, including hearty booing by Twins fans, Cabrera launched a high, long two-run home run to right-center field to put the Tigers up 3-0 in the top of the third, silencing the boisterous Metrodome crowd early.

Although the Twins managed one unearned run in the third inning, both Twins starter Scott Baker and Tigers rookie star Rick Porcello cruised until the Twins struck again in the sixth. Prior to Game 163, the Twins had scored 124 runs in the sixth inning during the 2009 season, the most of any team in baseball.2 After Porcello had retired nine straight Twins batters, hot-hitting Jason Kubel mashed a 1-0 fastball into the upper deck in right field. With the game at 3-2 in favor of the Tigers, the Metrodome crowd was alive again.

In almost any consequential game, there will be key moments that go “beyond the box score.” Leading off the bottom of the seventh, Twins utility man Nick Punto worked a nine-pitch at-bat against Tigers pitcher Zach Miner before slapping an opposite-field single to left field. This set the table for Orlando Cabrera.

Cabrera had played for the Chicago White Sox in 2008, the team that beat the Twins in another Game 163, 1-0. Traded to the Twins by Oakland at the 2009 trade deadline, Cabrera, an average fielder and hitter in the twilight of his career, provided a stable presence at shortstop and in the clubhouse.

Thus far, Cabrera had nothing to show for two deep fly balls earlier in the game. Tigers’ manager Jim Leyland elected to play “book” baseball with righty Miner against Cabrera, despite having left-hander Fu-Te Ni warm in the bullpen. As Cabrera approached the plate, TBS announcer Ron Darling foreshadowed his at-bat, saying, “He’s a winning player, and he always seems to get that big hit when you need it. They need it now.”3

On the first pitch, Cabrera pulled Miner’s hanging breaking ball inches over the left-field wall to give the Twins a 4-3 lead.4 The Metrodome crowd was unhinged. They stayed on their feet and waved their “Homer Hankies” through the entirety of the inning as they tasted a division championship just six outs away.

Cabrera’s home run was crucial but the lead was short-lived. On the second pitch from Matt Guerrier in the eighth, Magglio Ordonez uncorked a solo homer into the left-field seats. It landed in almost the exact spot where Cabrera’s had and tied the game.

After Guerrier got an out but issued two walks in the eighth, Minnesota manager Ron Gardenhire brought in closer Joe Nathan. Nathan worked out of the jam, the Twins went down one-two-three against Brandon Lyon in their eighth, and the game remained 4-4 into the ninth inning.

Nathan, known for his idiosyncratic twitchiness on the mound, had a flair for the dramatic. After working himself into a first-and-third jam with no outs, Nathan struck out Placido Polanco and then got Ordonez to line into a double play to end the inning. Nathan gave three emphatic fist pumps as he strutted off the mound while the Metrodome nearly popped from the deafening cheers of the Minnesota faithful.

As the game entered extra innings, play-by-play announcer Chip Caray put it best, saying, “Only fitting. … These teams, dead even after 162, dead even after nine innings in game 163.”5 But Detroit untied it and went ahead, 5-4, on Brandon Inge’s double in the top of the 10th off Jesse Crain, the Twins’ sixth pitcher; the Tigers were just three outs away from their first division title since 1987.

Cuddyer had been quiet through four at-bats, despite coming into the game scorching hot. He commonly over-performed in September during his career, and after September 1 he had logged 10 home runs and a .581 slugging average.

With three outs left in the Twins’ season, he lifted a shallow fly ball to left field. Ryan Raburn attempted to make an awkward sliding catch and instead the ball bounced off the Metrodome turf past him and to the wall. Cuddyer slid into third with a triple and the Twins had life. After an infield out on which Cuddyer couldn’t advance, Brendan Harris walked and Alexi Casilla pinch-ran. Then, on an 0-and-2 pitch, Matt Tolbert made a defensive swing and bounced the ball up the middle. The Tigers’ middle infield had been stuck between double-play depth and cheating in to cut off the runner at home. Tolbert’s ball got through and as Cuddyer scored, the game was again tied 5-5. Minnesota had runners on first and third with one out. It was now the Twins who could smell the division title.

Punto battled Detroit closer Fernando Rodney before lining a ball into left field to Raburn. Casilla had left third base early and had to re-tag before he headed for the plate. Raburn’s strong throw to Gerald Laird nabbed Casilla. Thus Raburn, partially responsible for the Twins’ tying the game, was also the one responsible for the double play that ensured an 11th inning.

Crain, Ron Mahay, and Bobby Keppel disposed of the Tigers without damage in the 11th. Rodney responded with his own one-two-three inning in Minnesota’s half.

With one out in the top of the 12th, Detroit loaded the bases on two walks, the second of them intentional, and a single. With Brandon Inge batting, Keppel went inside on the first pitch. It seemed to have grazed Inge’s baggy jersey, but home-plate umpire Randy Marsh missed the contact; Inge was not awarded first base. This critical turn of events kept the game tied as Inge grounded into a fielder’s choice, second to home. With two outs and the bases still loaded, Gerald Laird swung and missed at a low 3-and-2 fastball. The score remained 5-5.

In the bottom of the 12th, Rodney was still in the game in his third full inning of relief; there was no activity in the bullpen and no indication Leyland would replace his closer. Rodney gave up a single to the speedy Carlos Gomez and, after Cuddyer grounded out but got Gomez to second, Rodney issued an intentional walk to Delmon Young. With runners on first and second, it was former pinch-runner Alexi Casilla’s turn to be a hero. Casilla atoned for his baserunning error in the 10th by bouncing a 1-and-1 pitch through the right side of the infield. There was no play at the plate as Gomez slid head-first into home, followed by a celebratory leap. The Twins were 6-5 winners and AL Central Division champions.

Inge, on the losing end of the game, summed it up simply: “That has got to be one of the best games I’ve ever been a part of.”6

Full of drama, storylines, and unlikely heroes, this game embodied what can be so special about baseball. Whether it features scrappy middle infielders delivering clutch hits (Punto, Tolbert, Casilla), likely Hall of Famers stepping up in the spotlight (Miguel Cabrera), or a pitcher (Keppel) getting his only major-league win when it counts most, baseball, especially October baseball, delivers its share of indelible memories.

October 6, 2009, was the last day the Minnesota Twins would ever win at the Metrodome — a unique ballpark that had seen the drama of two seven-game World Series, unforgettable individual performances, and a white Teflon roof that this day, shielded 54,088 Twins’ faithful from a wet and cold October afternoon as their team delivered them a division pennant.8

The primary source for this article was game footage distributed by TBS and Major League Baseball through Apple’s iTunes “MLB.com Games of the Year 2009.” itunes.apple.com/ca/tv-season/mlb-com-games-of-the-year-2009/id309026763. Broadcasters Chip Caray and Ron Darling called the game on TBS. I also referred to the Baseball-Reference.com, Fangraphs.com, and Retrosheet.org websites for player and team statistics.

4 It was Cabrera’s third home run in 17 career at-bats against Miner.

8 The Twins played their last game at the Metrodome five days later, eliminated by the Yankees in the ALDS. They inaugurated their new ballpark, Target Field, on April 12, 2010, with a 5-2 win over the Boston Red Sox.