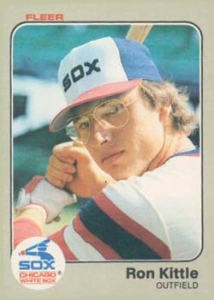 Baseball fever found its way to Comiskey Park on October 7, 1983, for the first time since the final game of the 1959 World Series. The White Sox hosted the Baltimore Orioles in Game Three of the American League Championship Series. Both teams ranked in the top three in their league in runs scored, home runs, and ERA.

Chicago’s 99 wins were one shy of the club record posted by the 1917 World Series champions and helped in setting its attendance mark (2 million fans).1 The team finished the season at a .758 clip (50-16).

Texas Rangers manager Doug Rader commented, “They’re not playing that well. They’re winning ugly.” The team and fans rallied around the moniker and called their unique red, white, and blue uniforms with “SOX” emblazoned on the front “Winning Ugly” uniforms.2

In the second, Bumbry’s slicing double to left scored Rick Dempsey (walk) for a 4-0 lead.7 In the bottom half, Kittle doubled to left and scored on an infield hit by Vance Law.

In the fourth, starter Mike Flanagan’s8 breaking ball hit Kittle in the left kneecap,9 clearing both benches.10 Beer had been thrown at Kittle in Game Two,11 so tensions were already high.12 Kittle tried to go after Flanagan but umpire Nick Bremigan intervened. While no fisticuffs occurred, a heated exchange developed between White Sox infielder Julio Cruz and Orioles pitching coach Ray Miller.13 Kittle departed in the sixth and did not play in Game Four, arriving in a wheelchair due to the injury.14

Dotson hit Ripken on a 1-and-015 two-out pitch in the fifth.16 Ripken walked to first and did not say anything to the White Sox pitcher.  No warnings were issued to the teams.17 The next pitch was inside to Murray, precipitating a second “bench clearing” event.18 Bremigan again acted as peacemaker, stepping between Murray and Dotson. Orioles bullpen coach Elrod Hendricks heatedly barked at La Russa, “You know better than that.” LaRussa replied, “Rod, it’s part of the game.” Hendricks answered, “Play baseball!”

La Russa declared after the game, “I am here to tell you that Ripken was not hit intentionally.”  However, Dotson contradicted his skipper, saying, “I kind of got the message: ‘Get the first two guys out of the way and hit the third guy,’”19 and that, perhaps, he had thrown at Murray. Kittle noted, “The Orioles hit only seven guys all year, and in two days, they’ve already thrown at three of us.”20

Dotson seemed to be undone by the events and walked Murray before giving up a two-run double to right field by John Lowenstein21 for a 6-1 lead.

In the top of the eighth, Murray walked and eventually scored on Todd Cruz’s single to left.

Flanagan and Sammy Stewart (four innings) combined for a six-hitter, allowing just one run. That run, scored by Kittle in the second, turned out to be the last of only three in the four-game series for Chicago.25

Ripken (2-for-4, three runs/double) and Murray (1-for-2, four runs, three RBIs, three walks, and a home run) led the O’s. The 10-run margin of victory tied an ALCS record.26 Nine walks led to six Orioles runs. Bob Maisel of the Baltimore Sun commented that Chicago tried to change momentum through a beanball war and it backfired. “They roared like lions and played like lambs the rest of the way,” he wrote.27

The Chicago Tribune’s Bob Verdi noted, “To borrow from Rodney Dangerfield, 46,635 people went to a baseball game at Comiskey Park Friday night and a hockey game broke out.”28 The consensus was that Chicago overreacted to Flanagan hitting Kittle. “If a savvy pitcher like Flanagan intentionally plunked a batter on a full-count offering, the man to go after Flanagan wouldn’t be Kittle. It would be Baltimore manager Joe Altobelli. … If all else fails, La Russa can … pick up and throw third base just to show the White Sox where it is.”29

Asked if Chicago was humiliated in the 11-1 loss, Kittle responded, “Humiliated? What kind of question is that? We’ll just try to get as much sleep as we can and come back swinging.”30

Unfortunately for Kittle, neither he nor the South Siders did much swinging in the remainder of the series.

In addition to the sources mentioned in the Notes, the author consulted baseball-reference.com, mlb.com, retrosheet.org, and SABR.org.

6 This ended a 0-for-29 postseason skid for Murray dating back to the 1979 World Series.

8 Flanagan was 12-4 in 20 games. In the first game of a doubleheader against Chicago on May 17, 1983, at Baltimore’s Memorial Stadium, Flanagan attempted to field a comebacker from Tony Bernazard when he caught his spikes in the dirt on the mound. His knee popped out and back in again, causing him to leave the game after just two batters. Bernazard was credited with a single. Flanagan spent 2½ months on the disabled list. Susan Reimerz [Reimer], “Flanagan’s Injury Has Affected Orioles From Top to Bottom,” Baltimore Sun (via Asbury Park New Jersey] Press), June 12, 1983: B14.

11 The perpetrator was charged with “throwing a missile and resisting arrest.” “Sox Notebook, Burns Hopes He’s a Mystery to Orioles,” Chicago Tribune, October 8, 1983: 2, 4.

16 Where the ball hit Ripken is anyone’s guess. Depending on the source, Ripken was hit on the hip (Free, Baltimore Sun), arm (Maisel, Baltimore Sun), leg (Verdi, Chicago Tribune) and/or ribs (Nightingale, The Sporting News).

20 Glauber. Baltimore starter Mike Boddicker hit White Sox first baseman Tom Paciorek in the second inning and DH Greg Luzinski in the ninth inning of Game Two. These were not only his first two hit batsmen in 1983, but also in his career.

23 Palmer had pinch-run for DH Singleton in the eighth. Both Koosman (Mets) and Palmer (Orioles), both on the rosters for this series, also played key roles on their 1969 teams that faced each other in the World Series.

25 The three runs by a team is the fewest in a League Championship Series. The 1970 Pirates also scored three, in three games.

26 The New York Yankees downed the Oakland Athletics in Game Two of the 1981 ALCS, 13-3, as part of a three-game sweep. As of the end of the 2017 season, the largest run differential was 12: The Boston Red Sox defeated the Yankees 13-1 in Game Three of the 1999 ALCS, their only victory in a five-game series.

29 Verdi. Earlier in the season, La Russa had, in fact, picked up third base and thrown it in a game against the Orioles.