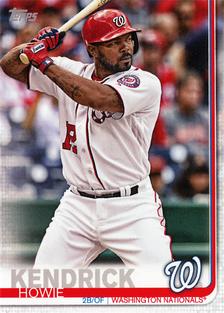 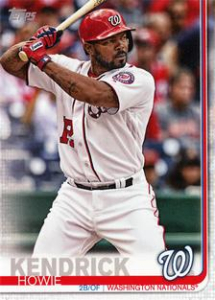 Game Five. Two words guaranteed to bring angst to the heart of any Washington Nationals fan. Three times since 2012 the Nationals had made it to a National League Division Series Game Five – and all three times they had lost, in heartbreaking fashion.1 A fourth NLDS trip, in 2014, had resulted in three one-run losses and series elimination in four games.

And here they were again in 2019, with their team facing the 106-win Los Angeles Dodgers on hostile turf in a win-or-go-home NLDS Game Five. Three seasons earlier, in 2016, the Dodgers had contributed a 4-3 Game Five NLDS loss to the Nationals’ saga of near misses.

During 2018 spring training, new Nationals manager Davey Martinez brought two camels to their West Palm Beach facility, using the analogy that the Nationals were finally ready to get “over the hump” and win a playoff series.2 They didn’t even have the chance that year, finishing 82-80 and missing the postseason.

The Dodgers had their own hump to overcome. In 2019 they had reached the postseason for the seventh season in a row. They had won the pennant in each of the previous two seasons. But they had lost the World Series to the Houston Astros in 2017 and the Boston Red Sox in 2018, and it had been 31 seasons and 12 postseason appearances since their most recent World Series title, in 1988.

Now, the Dodgers were one loss from elimination in the NLDS, against a team that started their season 19-31, whose path to the postseason was through the wild-card game, helped by a random bounce of a ball in the outfield in a comeback win over the Milwaukee Brewers.

Dodger Stadium was packed with 54,159 vocal fans, mostly dressed in Dodger blue and waving blue rally towels. A few dozen Nationals fans were there – easily spotted by their red gear among the sea of blue.

The Dodgers had a great pitcher on the mound. All-Star Walker Buehler (14-4, 3.26 ERA in the regular season) had held the Nationals to one hit in six innings in the Dodgers’ 6-0 win in Game One. This game started off as more of the same as Trea Turner, Adam Eaton, and Anthony Rendon were out on 11 pitches in the first inning.

Stephen Strasburg3 took the mound for the Nationals. He had also pitched six innings, allowing three hits and one run in the Nationals’ 4-2 win in Game Two while notching 10 strikeouts.

This outing did not start well. Leadoff batter Joc Pederson thought he’d hit a home run, but it was ruled a ground-rule double since the ball went through the padding on the bullpen gate – not over it. It didn’t matter that he was sent back to second base. Max Muncy brought him home with a no-doubt home run. Strasburg walked Justin Turner on four pitches but followed that with a strikeout of Cody Bellinger. Matt Beaty singled to put two on, but Strasburg got out of the inning without further damage with a double play.

All Buehler allowed in the second was a single by Ryan Zimmerman.

In the home half of the second, Strasburg allowed a leadoff home run to Kiké Hernández, giving the Dodgers a 3-0 lead. After that, though, he seemed to settle in, allowing only a single by Pederson in the second before retiring the side.

Despite Strasburg’s best efforts, it seemed as though the Dodgers’ early salvo might be enough. The Nationals had one baserunner in each of the third and fourth innings but managed nothing against Buehler.

The Nationals looked as if they might break through in the fifth when Kurt Suzuki walked and Michael A. Taylor singled to start the inning. But Strasburg’s two-strike bunt attempt went foul, Turner struck out, and Eaton flied out to leave the runners on base.

Strasburg allowed no baserunners in the bottom of the fifth.

The Nationals finally got on the board in the sixth. Rendon opened with a double and scored on Juan Soto’s single. But Howie Kendrick grounded into a double play and Zimmerman struck out, leaving the score at 3-1, Dodgers.

Strasburg allowed a leadoff single to Bellinger in the bottom of the sixth. Bellinger stole second on the next pitch, but Strasburg stranded him there with swinging strikeouts of Beaty, Corey Seager, and Hernández.

Buehler’s pitch count stood at 97 when he started the seventh inning. He hit Suzuki’s wrist with a pitch that ricocheted up and knocked off the veteran catcher’s batting helmet. Suzuki came out of the game with Yan Gomes taking over as pinch-runner, then at catcher.4

After Taylor struck out and Asdrúbal Cabrera (pinch-hitting for Strasburg) lined out, Buehler walked Turner on six pitches. Dodgers manager Dave Roberts took out Buehler at 117 pitches, and the Dodger Stadium fans gave the 25-year-old right-hander a standing ovation.

Roberts called on Clayton Kershaw, usually a starter, to pitch in relief. Despite Kershaw’s reputation for postseason struggles,5 he had a prior successful relief appearance against the Nationals and a long record of pitching excellence, including three NL Cy Young Awards, an MVP Award, and five ERA titles.6 This appearance started well enough – he struck out Eaton on three pitches for the third out. The Dodgers were six outs from advancing.

The Washington team had found themselves in this spot before: Behind 3-1 in the eighth in the wild-card game7 the previous week, they rallied for a 4-3 win. Even the lone Washington World Series win in 1924 – when the American League’s Washington Senators represented the city – finished with a Game Seven in which they were down 3-1 going into the eighth inning but won, 4-3.

Since Cabrera had pinch-hit for Strasburg, Martinez needed a relief pitcher who could keep the Dodgers in check while hoping for a late-inning comeback.8 Right-hander Tanner Rainey was up to the task, getting quick outs of Will Smith and pinch-hitter Chris Taylor (both right-handed hitters). With lefty Pederson up next, Martinez summoned lefty Patrick Corbin. Corbin, who hadn’t made a relief appearance since 2017, was looking for redemption. He was responsible for six of the seven two-out runs allowed in the sixth-inning meltdown in the Nationals’ Game Three loss. He was up to this assignment – he struck out Pederson on four pitches.

The game took a dramatic turn in the top of the eighth. Rendon hit Kershaw’s second pitch just over the left-field wall, making it a one-run game. With the crowd still buzzing, Soto walloped the next pitch, a hanging slider, halfway up the center-field stands, tying the game.

The Dodgers fans responded with a chorus of boos – interspersed with a few cheers from the red-clad fans. Kershaw crouched on the mound in disbelief, cap in hand.

While the Nationals were dancing in their dugout to celebrate the homers, Roberts made the long walk out to the mound, took the ball, and called in Kenta Maeda. Maeda, a starter in Japan and when he arrived in the majors in 2016 before transitioning to a swing role in 2018, had been used exclusively in relief since September.

He struck out Kendrick, Zimmerman, and Gomes to preserve the tie. The TV broadcast showed Kershaw sitting in the dugout, staring at the field or down at his hands, with no teammates anywhere near him.

Corbin returned to the mound in the bottom of the eighth, plunking Justin Turner with one out but stranding him with two strikeouts.

Dodgers relief pitcher Joe Kelly kept the Nationals in check in the ninth with two strikeouts and a popup.

Daniel Hudson, the Nationals’ closer acquired from the Blue Jays at the trade deadline, pitched the bottom of the ninth. The Dodgers had 12 walk-off wins in 2019, and the crowd was rooting loudly for another.

Hernandez singled with one out. Smith gave the ball a ride, but Eaton caught it on the warning track about three feet from the wall. Perhaps earlier in the game, or in a day game, that ball would have gone out, but not after the marine layer had moved in.9 The Dodgers had started jumping over the dugout rail to celebrate, then had to climb back in when the ball was caught. Chris Taylor flied out to send the game to extra innings.

Kelly walked Eaton to start the 10th. Rendon hit a liner to left for his third straight hit. The ball lodged in the padding at the bottom of the wall for a ground-rule double.

With runners on second and third and no outs, Roberts chose to walk Soto to pitch to Kendrick, who was 0-for-4.10

The 36-year-old Kendrick, a member of Dodgers’ postseason teams in 2015 and 2016, hit Kelly’s second pitch to deep center for a grand slam.11 Fans began leaving the ballpark before he crossed home plate. Back in Washington, at the Nationals Park viewing party, the fans went wild. Two batters later, Roberts took the ball from Kelly – to the resounding boos of the remaining Dodgers fans.

The Nationals took the 7-3 lead into the 10th. Sean Doolittle, the Nationals’ former12 closer, was on the mound13 to get the last three outs and send the Nationals where they’d never been before – the NLCS. Pinch-hitter A.J. Pollock, who was 0-for-12 in the series, made it 0-for-13 with a strikeout. Muncy grounded to first – first baseman Zimmerman, a National since the franchise’s first season in DC in 2005, easily beat him to the bag.

Justin Turner hit a sinking liner to center. Taylor dove, rolled, and held on. He held up the ball, and the Nationals began to celebrate. Roberts challenged the catch, but it was quickly upheld. Umpire crew chief Ted Barrett raised his right hand and the Nationals could officially celebrate their victory – on their way to their eventual World Series win.

Before going down to the clubhouse, Martinez acknowledged the Nationals fans, who had congregated at the visitors’ dugout to celebrate with their team.

When the Nationals were 19-31 in May, we figured we wouldn’t be busy in October, so we planned an October trip to Cooperstown. We were on our way, staying in an airport hotel, watching this game. When Howie homered, we yelled so loudly that the folks next door pounded on the wall. I can say that was the only time I made enough noise in a hotel room to trigger that response.

In addition to the sources below, the author watched the recorded game on MLB.tv, available on YouTube. https://www.youtube.com/watch?v=Nqa_CLF6IvU

3 He wasn’t selected to the All-Star Game, but had the most wins (18) and the most innings pitched (209) in the National League.

6 He got the last two outs in the 2016 NLDS Game Five against the Nationals to earn the save – the only one of his career.

11 In his postgame interview, Kendrick said that was the best moment of his career. He probably would reevaluate that statement three weeks later after his clutch home run in Game Seven of the World Series.

12 Although Doolittle was the closer for the Nationals earlier in the 2019 season, the Nationals acquired Daniel Hudson from the Toronto Blue Jays at the trade deadline. Hudson took over the closer role, including throwing the final pitch of the 2019 World Series.

13 Despite having pitched seven innings in Game Four two nights earlier, Max Scherzer was in the bullpen (although not throwing). It is possible Martinez sent him out there to keep him out of the way rather than with any actual intent to use him in the game – the TV camera caught him talking to Martinez through the later innings.