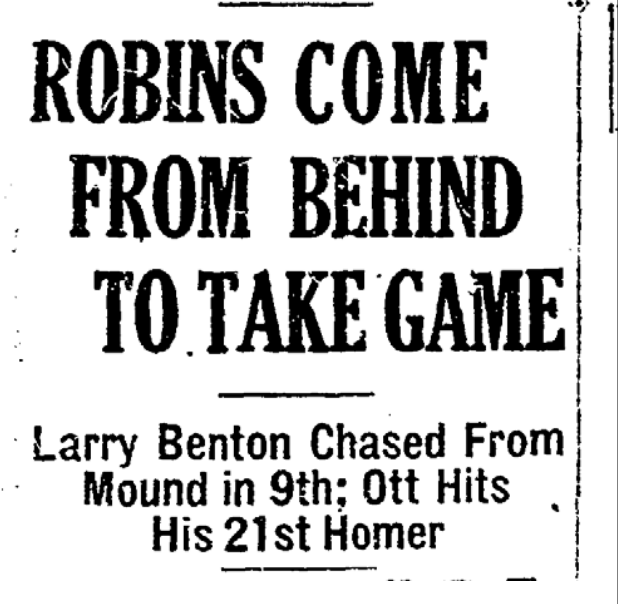 The Brooklyn Robins and New York Giants were seemingly participating in different leagues though the teams were adjacent in the standings in late June of 1929. The fifth-place, 26-34 Robins were 11½ games behind the NL-leading Pittsburgh Pirates, and a half-game ahead of the Boston Braves. The fourth-place, 34-26 Giants fared better, 3½ games from first place and one game behind the third-place St. Louis Cardinals. The teams were nearly meeting expectations; during spring training, 103 writers from the Baseball Writers’ Association of America picked New York to finish second and Brooklyn sixth.1 The crosstown rivals already met 13 times in 1929; somewhat surprisingly, Brooklyn had won eight times.

The Dodgers were managed by Wilbert Robinson, who had guided Brooklyn since 1914. The team was attempting to break its four-year streak of finishing sixth; Brooklyn hadn’t contended for the pennant since its 1924 second-place finish. The Robins’ leaders included veteran pitcher Dazzy Vance and young hurler Watty Clark, complemented with outfielders Babe Herman and Johnny Frederick. The team struggled during spring training, lacking offense, with a 3-10 record against major-league and Double-A teams. The Sporting News said, “They had no punch last season, and no hope is in sight unless it should be provided by shortstop Glenn Wright and Heinie Nicholas Cullop.”2

The Giants enjoyed more recent successes, winning four pennants and two World Series from 1921 to 1924, but had finished two games from first place in 1927 and ’28. Manager John McGraw was leading New York for his 30th campaign, and the Giants had brimmed with confidence since spring training.3 Twenty-year-old outfielder Mel Ott was enjoying a breakout season. The an infield was anchored by shortstop Travis Jackson and first baseman Bill Terry. The pitching staff featured two 20-game winners, Larry Benton and Freddie Fitzsimmons. The Giants won six straight games at Philadelphia,4 scoring double-digit runs in each game, before losing back-to-back contests to Brooklyn entering the afternoon matchup on the 25th.

Doug McWeeny started for Brooklyn. The lanky right-hander struggled through mid-June after a solid 1928 campaign when he posted career highs in wins (14) and innings (244) while leading the NL with four shutouts and 114 walks issued. McWeeny expected to significantly contribute in 1929,5 but had just a 3-7 record and a 5.16 ERA through 89 innings entering the game. McWeeny had allowed at least three runs in each of his previous nine starts dating to May 8, though he had recently displayed a return to his 1928 form.6 In his last start, a no-decision, McWeeny allowed three runs on 10 hits in 11⅓ innings. He struggled with controlling his primary pitch, a fastball. He also threw “a fair screw ball and only a mediocre curve.”7

Larry Benton started for New York. In 1928 he won 25 games and pitched 28 complete games, tied for the NL league lead with Burleigh Grimes in both categories. Entering this game, the veteran right-hander was 6-7 with a 4.03 ERA in 102⅔ innings. Benton had won his last decision, pitching 4⅓ relief innings three days earlier. In a start against Brooklyn a week earlier, he allowed five runs on five hits without recording an out in the first game of a Robins doubleheader sweep.8 Benton’s primary pitch during the first half of his career was his fastball.9 After pitching over 300 innings for the first time in his career during the 1928 season, his fastball slowed and he developed a wide sweeping curveball during the 1929 season.10

Brooklyn’s offense started quickly against Benton once again; Frederick and Wally Gilbert led off the game with singles. Frederick then scored when second baseman Billy Rhiel threw wild on Harvey Hendrick’s grounder. With one out, Rube Bressler doubled home Gilbert and Hendrick. Benton prevented further damage on a strikeout and fly out though Brooklyn built an early 3-0 lead.

New York also started quickly. Edd Roush and Freddy Leach singled, then Freddie Lindstrom walked to load the bases with no outs. Ott grounded into a fielder’s choice and Roush scored. Leach scored next on Terry’s fly ball. Andy Cohen singled to place runners at the corners, but Jackson grounded out to end the inning with the Giants trailing by one run.

Benton pitched better during the second inning, giving up just a walk. McWeeny struggled again; Shanty Hogan started New York’s half with a single, then took second base on a wild pitch. Benton flied out and Roush singled as New York again threatened. Wasting no time, Robinson replaced McWeeny with Ray Moss. Moss was greeted with run-scoring singles by Leach and Lindstrom, followed by a two-run blast by Ott, his 21st of the season. New York led 6-3.

Both teams then cooled off. The Robins had one baserunner per inning from the third through the sixth; the Giants loaded the bases in the fifth inning on a walk, single, and intentional walk, but didn’t score.

The Giants pressed again in the sixth. After a leadoff groundout, Leach and Lindstrom singled; Ott reached on an error to load the bases. Terry singled home two runs, and Cohen followed with another run-scoring single. Brooklyn’s Lou Koupal relieved Moss and Jackson hit into a fielder’s choice. But Hogan continued the merry-go-round by singling Terry home. Hogan was caught stealing but the Giants now led 10-3.

Brooklyn scored a pair of runs in the seventh. Frederick singled, took second on a groundout, and scored on Bissonette’s single. Bissonette scored on Bressler’s single. New York now led 10-5.  In the Giants’ seventh, Koupal settled down, retiring the Giants in order. The Robins couldn’t carry their momentum into the eighth and went down one-two-three. In the bottom half Terry singled and Cohen walked with two outs, but Jackson popped out.

The Giants’ Benton returned to the mound for the ninth. Frederick reached first base for the third time as the leadoff hitter of an inning. He scored his third run after Herman and Hendrick singled. Bissonette singled to load the bases with no outs and Brooklyn was within striking distance of tying the game. Bressler grounded out but all runners moved up 90 feet, including Watty Clark, who pinch-ran for Herman and scored Brooklyn’s seventh run. Dave Bancroft lined out to right field, but Hendrick scored and Bissonette advanced. Brooklyn’s veteran catcher Val Picinich then launched a Benton fastball into the left-field seats. The Robins had come back from a seven-run deficit to tie the score, 10-10. A pop fly ended the rally.

Johnny Morrison relieved Koupal in the bottom of the ninth. Hogan and Crawford walked, and a groundout moved Hogan to third, but he was stranded on a popout.

New York reliever Dutch Henry relieved Benton for the 10th. With one out, Frederick beat out a slow roller for an infield hit.11 Eddie Moore singled Frederick home with the go-ahead run and reached second on the throw home. Hendrick tripled, plating Moore with an insurance run, but was thrown out trying for an inside-the-park home run. Bissonette grounded out but the Robins led for the first time since the first inning.

Morrison returned for a second inning, and Ott greeted him with a left-field double as New York brought the tying run to the plate. Terry flied out to center field and Ott advanced. Then Cohen and Jackson both grounded out, giving Brooklyn a 12-10 victory with nine unanswered runs that “ruined Mr. McGraw’s afternoon,”12 although one could “imagine the joy of the Brooklyn fans and 8,000 schoolboys who had been guests at the game.”13

Morrison improved to 4-0 with two scoreless innings, his fourth win in 11 Brooklyn appearances, tying him with McWeeny,14 while Henry absorbed the loss. Brooklyn’s Frederick, Bissonette, and Bressler had three hits apiece with Frederick scoring four runs and Bressler driving in four. Each team banged out 17 hits and was charged with two errors.

As in to the previous four seasons, the Robins finished in sixth place. With a 70-83 record, the Robins were 28½ games behind the pennant-winning Cubs. Though they scored 90 more runs than in the prior season, their pitching staff allowed 248 more runs, the NL’s second-highest total. Johnny Frederick hit .328 and led Brooklyn with 127 runs. The Giants finished third, 13½ games behind Chicago, with an 84-67 record. Their 3.97 team ERA paced NL staffs. One key pitching component was leading the NL with the fewest walks. But Benton was 12-17 with a 4.14 ERA. The teams continued their intra-city rivalry, playing several close games, with Brooklyn winning 14 of 21 contests.