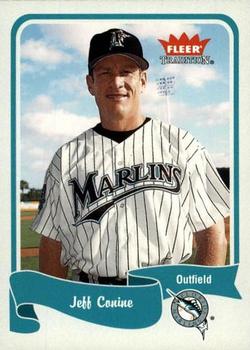 On August 31, 2003, Florida Marlins general manager Larry Beinfest was furiously working the phones looking for reinforcements, as well as another veteran presence for his young team. The Marlins were in a dead heat with the Philadelphia Phillies for the National League wild card and had just lost their starting third basemen, Mike Lowell, to a broken hand, victim of a Hector Almonte pitch the previous day. After calls to acquire Jay Payton and Scott Spiezio failed,1 the Marlins went back and acquired the player who had truly been their first star — Jeff Conine. He had played with the Marlins from 1993 through 1997, placed second in National League Rookie of the Year voting in 1993 and been an All-Star in 1994 and 1995.

After the 1997 season, with the Marlins as reigning World Series champions, Conine been traded to Kansas City as part of the “fire sale” when Marlins owner Wayne Huizenga unloaded most of the higher-priced players on the team.2 Conine had subsequently been dealt to Baltimore in early 1999.

The August 31 trade brought Conine back to Miami. The Orioles received pitchers Denny Bautista and Don Levenski, a minor leaguer.

Conine, who had been playing first base for the Baltimore Orioles, was acquired by the Marlins to play left field and free the Marlins to move young Miguel Cabrera to third base, as well as to provide more veteran presence in the locker room.3

The trade was complicated by two factors. The Marlins were facing a midnight deadline to complete all waiver wire trades. And in order for the trade to go through, Conine had to rework his contract and gave up money in exchange for an added year of security on his contract.4 The trade itself was a welcome one for Conine’s wife, Cindy, and their family, who had lived full-time in Weston, Florida, since 1995. All three of their children went to school in South Florida.5

Conine flew to Miami from Seattle, where the Orioles had been playing the Mariners. He arrived on the morning of Labor Day, September 1.6 Beinfest had given him the option of taking off that day’s Marlins-Expos game, one the Marlins hoped to win for a series sweep. But with the Marlins in a dead heat with the Phillies, Conine didn’t even hesitate, saying, “I’ve got a new team. I thought it was important that I get down there and play.”7

Before the 4:05 P.M. game, the small Labor Day crowd of 12,413 cheered Conine on as he stretched on the field and as the public-address system played the theme song of the 1970s television show Welcome Back Kotter.8

For his first game back in a Marlins uniform, Conine hit cleanup and played left field for manager Jack McKeon. He contributed right away. Leadoff hitter Juan Pierre bunted to shortstop for a single and moved to third base on a single to left field by Mike Mordecai. Expos right-hander Tomo Ohka struck out Ivan Rodriguez, but Conine hit a fly ball that Expos second baseman Henry Mateo caught near the line in short right field. Pierre, an extremely aggressive baserunner, decided to test Mateo’s arm and succeeded in scoring the first run of the game. That gave Conine a run batted in in his first at-bat as a member of the Marlins since he played with the team in Game Seven of the 1997 World Series.

The game remained 1-0 through the first three innings, but Marlins pitcher Brad Penny hit a speed bump in the fourth and gave up solo home runs to Brad Wilkerson and Vladimir Guerrero.

In the fifth inning Conine showed off his defensive prowess when, with one out and Brian Schneider on first, he made a sliding catch on a ball hit by Endy Chavez, and got off a quick throw to double Schneider off.9

In the sixth inning, Conine had his first hit as a Marlin since Game Five of the 1997 World Series, with a line-drive single to right off Ohka. But he was stranded on second as Ohka got out of the inning and maintained the one-run lead for the Expos.

While Conine did not have an impact on the rest of the game, the Marlins ended up coming back for a four-game sweep, scoring two runs in both the seventh and eighth innings to win, 5-2. The Marlins’ win, coupled with a Philadelphia loss to Boston, gave them a one-game lead in the National League wild-card race.

After the game the Marlins were all smiles. Reacquiring Conine sent a message to the league that after six years in the major-league wilderness, the Marlins were no longer prepared to be laughingstocks, declared Marlins pitcher Rick Helling. (He, Conine, and Luis Castillo were the only Marlins who had been on the team in 1997.) He said the team was primed for a postseason push. Conine said he was happy to be back and was very impressed by the team’s aggressive style, one that was on full display during the game.10

The presence of Conine not only helped stabilize the Marlins in the wake of Lowell’s injury. It provided them with a solid left fielder, returning Conine to the position he had played during the first four years of the Marlins’ existence. Conine also gave the team another veteran locker-room presence. The Marlins went 18-8 in September despite the absence of Lowell, and blazed past Houston and Philadelphia to capture the wild card by four and five games respectively. In the postseason they went on a run that ended with their second World Series championship. Jeff Conine was on both championship teams.

In addition to the sources cited in the Notes, the author consulted baseballalmanac.com and baseball-reference.com.