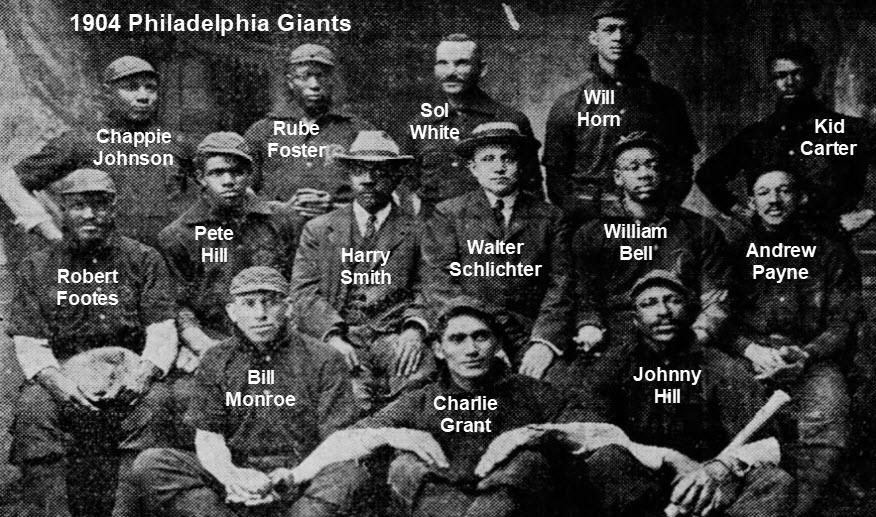 The early twentieth century rivalry was intense between the two leading Negro teams of the East Coast, the established Cuban X-Giants,1 managed by Grant “Home Run” Johnson, and the upstart Philadelphia Giants, managed by Sol White. The Cuban X-Giants had prevailed over the Philadelphia Giants, five games to two, in their 1903 championship series.2 Andrew Foster, a big right-handed hurler from Texas, won four games in the series for the X-Giants.

There were no organized Negro leagues at this time. The Cuban X-Giants and Philadelphia Giants played most of their games against white East Coast minor-league, college, and semipro teams.

During the 1904 season, the Cuban X-Giants billed themselves as “the Colored Base Ball Champions of the World.”4 Buckner shut out a Wilmington, Delaware, team on May 20, 1904, in a 1-0 victory for the X-Giants.5 The next day X-Giants pitcher Walter Ball fired a one-hit shutout against Camden, New Jersey.6 The team’s best pitcher, southpaw Danny McClellan, had pitched a perfect game against Penn Park the year before, on July 17, 1903.7

Foster anchored the Philadelphia Giants’ pitching staff in 1904. He hurled two no-hitters during the season, and his teammates, Will Horn and Kid Carter, each threw one. The club was prepared for a rematch with the Cuban X-Giants in a three-game championship series set for Thursday through Saturday, September 1, 2, and 3, 1904.

The series was played at Inlet Park in Atlantic City, New Jersey. The ballpark had been recently renovated and featured a new grandstand with a capacity of 3,000 and bleachers able to accommodate 6,000 more. The ballpark was “as pretty and bright as could be,” said the Philadelphia Inquirer.8

In the first game of the series, the attendance was 4,000, and “betting on the game was very heavy and the excitement intense throughout.”9 The Philadelphia Giants won the game, 8-4, and the star of the game was Foster, who fanned 18 batters and had three hits, including a triple. Payne also contributed three hits for the Giants, including a home run. McClellan was the starting pitcher for the X-Giants, but he struggled and was relieved by Ball. Buckner homered for the X-Giants and played flawlessly in right field, recording five putouts and one assist. X-Giants first baseman Robert Jordan had two hits, including a home run, but made two errors in the field. The X-Giants’ Harry Moore, one of the best outfielders of the era, had a dreadful day, making three errors in center field.10

Three thousand fans attended the second game of the series, a pitchers’ duel won by the Cuban X-Giants, 3-1. Buckner earned the victory with a six-hitter, while Horn and Foster combined for a five-hitter in a losing effort. Grant Johnson tallied three of the X-Giants’ five hits.11

Five thousand fans, the largest crowd ever at Inlet Park, turned out for the series finale and saw the Philadelphia Giants “wrest the colored ball championship of the world” from the Cuban X-Giants in a “hard fought” 4-2 triumph.12 Foster and McClellan each pitched complete games. This time Foster struck out only five batters, but he allowed only two hits, a third-inning single by Johnson followed by a John Patterson home run, to account for the only two X-Giants runs. McClellan yielded six hits and a single earned run. Three X-Giants errors contributed to their loss, including two more by Moore in center field.13

In his Official Base Ball Guide published in 1907, Sol White summed up the 1904 championship series: “Both players and spectators were worked to the highest pitch of excitement. Never in the annals of colored baseball did two nines fight for supremacy as these teams fought.”

The Philadelphia Giants’ 21-year-old center fielder, Pete Hill, had only one hit in the series, but he would go on to play 21 more seasons with great success.

After Foster had outdueled Rube Waddell in an exhibition game in 1902, the press nicknamed him “Rube” Foster.14

Rube Foster was inducted into the National Baseball Hall of Fame in 1981; Sol White and Pete Hill were inducted in 2006.

1 The Cuban X-Giants were not Cuban. The “X” in their name was used to distinguish the club from an earlier Negro team called the Cuban Giants, from which many of the X-Giants had defected. Cuban X-Giants entry, Kansas State University Negro Leagues Baseball Museum website, coe.k-state.edu, accessed December 2, 2017.

3 In 1901 John McGraw tried to put Charlie Grant on the Baltimore Orioles by passing him off as a Cherokee Indian named Tokohama (Sporting Life, March 16, 1901).